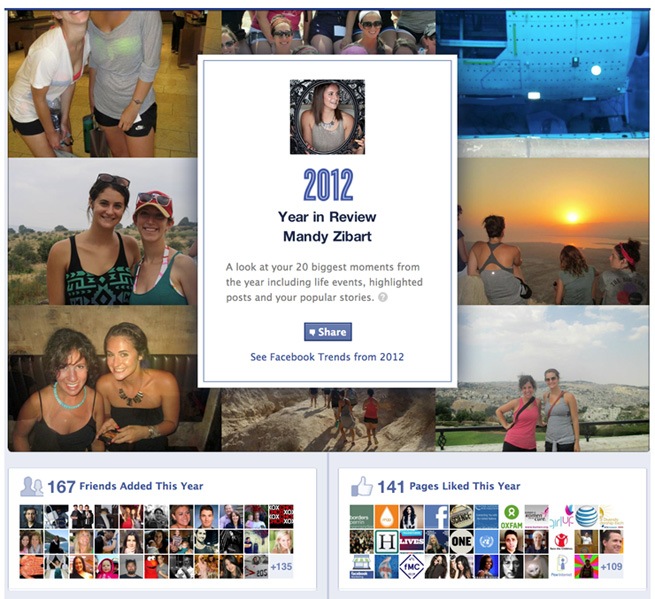 Social networking titan Facebook has released a 2012 Year in Review that shows off notable trends of the year and, in a nice twist, the 20 biggest stories from your Timeline.

Similar to Google’s Zietgiest, Facebook’s Year in Review takes advantage of troves of data on its more than 1 billion users to accurately sum up the big things that happened this year. Some of the results might even surprise those who didn’t pay attention to a certain category. In television, for example, I had no idea that A&E’s Duck Dynasty was so popular on Facebook — more popular than Here Comes Honey Boo Boo and Game of Thrones.

The Year in Review also takes a personal twist by showing you the biggest things that happened to you (on Facebook) in 2012. Posts and pictures in which you’re tagged that have a lot of likes and comments are the most likely candidates for big moments. My year in review features several moments surrounding the presidential election, popular photos taken with friends, memes, and a few news stories shared on my Timeline. To see your personal Year in Review, go to facebook.com/yearinreview.

To see more on Facebook’s top trends, check out facebookstories.com/2012. Here’s the full list of trends from 2012 for the United States: