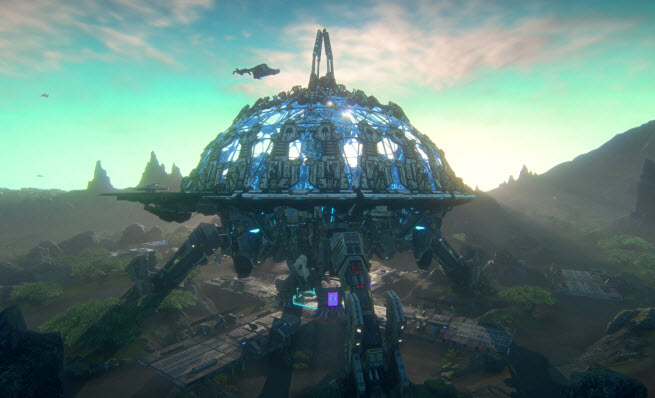 PlanetSide 2 is off to a smashing start just a few weeks after launch. Sony Online Entertainment president John Smedley (pictured below) said in an interview with GamesBeat that the free-to-play sci-fi shooting game has drawn a huge audience since its debut in North America and Europe on Nov. 20. It’s already the highest microtransaction-grossing game in the history of Sony Online Entertainment, which offers a number of other free-to-play massively multiplayer online games.

Players can try the game for free and pay real money for virtual goods. During the past weekend, as many as half a million logged in.

PlanetSide 2 permits as many as 2,000 players to join each other in combat in the same server, or an area known as a continent in the game. They can fly through the air, duel each other in tanks, or fight as infantry. Sony Online Entertainment operates other free-to-play games such as Free Realms, but none has been as big as this one. Here’s an edited transcript of our interview with Smedley. 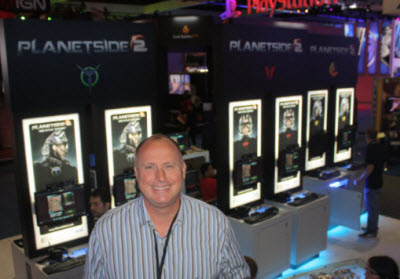 GamesBeat: How long has it been now?

Smedley: It is three weeks since we launched PlanetSide 2. The game is already an order of magnitude bigger in revenue than any game we have. I can’t give you absolute numbers, but we’re growing like crazy — 1.6 million registered. We’ve got a large playing population. It’s going great.

GamesBeat: What are you noticing about the gameplay, and what people are doing?

Smedley: Well, here’s an interesting fact. On weekdays, it’s an average of 60 minutes per session. On weekends, it’s 90 minutes. We see a large amount of players that will stay on there for hours at a time, though. People are playing, on average, a couple of hours a day altogether. It’s much stickier than the usual FPS [first-person-shooter].

GamesBeat: Can you go over some of the history of developing the game?

Smedley: We developed it over about two years. It runs on our proprietary Forgelight engine, which is our way of being able to develop new online games quite rapidly. It has all the pieces of next-generation technology built in, so it’s easy to develop. We have proprietary antihacking technology built in. It was probably one of our easiest products ever to develop. The reviews are terrific. Every now and again, you hit the ball hard and see it go into the stands. That’s what we’ve got. We’re getting great reviews. Everything’s going great.

On Steam, for example, during any arbitrary part of the day … let me look right now. You can look and see where Call of Duty multiplayer is. We just did a patch, so our numbers are a little lower right now, but if you wait until later in the day, we’ll actually be above them. A lot of people are playing it, is what it comes down to. 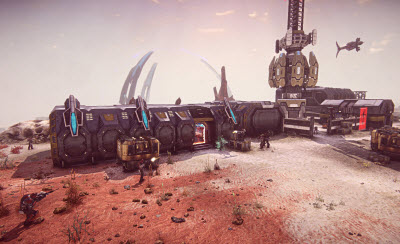 GamesBeat: How many of the people in your player base came from the original PlanetSide, do you think, and how many are brand new to Sony Online?

Smedley: I would say it’s maybe 10 percent people who played the original. Another 20 percent have played our games before. The rest are new — 70 percent of the people coming in are new to our business.

GamesBeat: Where did you find them? What did you guys do to try to draw new users?

Smedley: Mostly, we’re focusing on existing shooters — games like Battlefield 3. But what it really was [was] the community. During the beta, people started hearing about it. They told their friends. People checked it out. It just grew outwardly. What’s been the best thing about this game is that we grew successfully from a small core into something quite large.

GamesBeat: What do players do when they join up? From what I hear, they have to find protection pretty quickly.

Smedley: Usually what happens is, somebody’s thrown into the game, and we deliberately put them into the fight fast. In terms of game mechanics, it’s exactly like every other FPS out there. If you play Battlefield 3 or Call of Duty, you know our controls. You know immediately who to shoot at. That, I think, is the single biggest reason we’re successful. We didn’t try to change the core gameplay. What we did is we made that core gameplay massive. You’re in fights with 2,000 other people. You’re not in fights with six to 12 other people. You’re in serious warfare. When people see the scale of what we’ve done, that’s what really blows them away. You should give it a try. It’s a hell of a lot of fun.

GamesBeat: How large are the packs in which people are running?

Smedley: That’s another cool thing about the game. Our squads, for example, are 12 people. A platoon, which other games don’t have, is 48 people, four squads. Then our outfits can get up to 500 people. An outfit would be the equivalent of a clan. The difference in our games is that all of them can be on one server at a time. It’s pretty awesome to see huge groups of tanks with aircraft in the sky above them.

GamesBeat: What is it that helps you get around the old days of being stuck on a shard, a particular closed-off area?

Smedley: Well, we still have individual servers. Each server has three continents on it, and each continent can hold about 2,000 people. So there’s still a smaller server community. What we’ve done is taken our MMO engine and built it for speed and built it for accessibility so that FPS players can come in and easily use it. It took a lot of work, but we were able to get it going with 2,000 people. The only thing I can say is, that’s what Forgelight offers that our competitors don’t have.

GamesBeat: You seemed to get particularly mad last week on Twitter about somebody you had to ban.

Smedley: I hate cheaters. I hate them. I hate cheaters with a passion. We have dedicated people inside our company who do nothing but fight that. We will not tolerate it. We will ban them. And people who sell cheats, which is what this one website does, I especially hate them. We’ve got a cold place in our hearts for people who do that kind of stuff. So we’re going to be very public about the people at the top of that food chain. The average people who we ban — we banned 300-some people this weekend for cheating — we’re not going to talk about them. But the people who distributed the cheats, we’ll go after them.

GamesBeat: This sounds more aggressive than you’ve been. Or has it always been this way, and I just haven’t noticed?

Smedley: We’ve always been aggressive with cheaters, but in particular, an FPS requires a layer on top of that. It’s a skill-based game. If somebody uses an aimbot, they can kill 50 people before they’re ever killed. That’s not fair. It’ll ruin the game. We won’t tolerate it. We fight it. 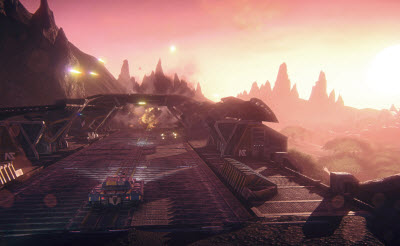 GamesBeat: [What] is the technology for catching them now?

Smedley: It’s great. Catching them is simple. It’s actually next to no work. We simply catch them and kick them out of the game. We also have prevention technology that works quite well. But over time, the people that make the cheat programs. … There are levels of sophistication that make it difficult to combat. We’ve gone with a slightly different approach than before. We’re solving the problem by trying to both prevent it and detect it and get those people out of our games for good.

GamesBeat: So you’re not fatalistic about this. It sounds like you’re going after it.

Smedley: Very much so. Our game will be as close to cheat-free as we can possibly make it. It’s really important to us.

GamesBeat: I take it that it turns out to be a very small percentage of the overall population.

Smedley: Oh, yeah. This weekend, where we maybe had half a million people playing, the number of cheaters that we banned was maybe 300. It’s a very small number. But usually, they’re idiots, and they’re public about it. A guy will go on a hundred-kill streak, slaughtering people left and right. Then we catch him and bang, he’s gone. Can’t come back in.

GamesBeat: What’s the road map going forward with this?

Smedley: In January, we’ll be announcing a six-month road map for our players. That’s something else we’re doing very differently than any of our other games, and we’ll be doing it going forward with our next game, EverQuest Next. We’ll announce our road map ahead of time and let our players voice their opinions on our forums. We’ll converse with them about it.