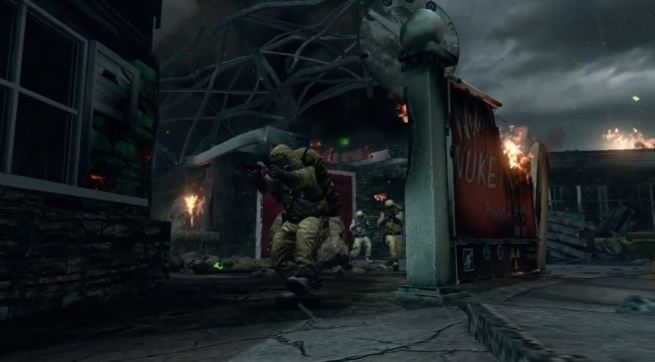 Every one of Call of Duty: Black Ops II’s multiplayer matches that takes place on the Nuketown 2025 map ends with a nuclear explosion. But what happens after that massive detonation? Zombies, of course.

Today, developer Treyarch released a variation of its Nuketown 2025 map, which is based on a 1960s nuclear bomb test site, for its popular Zombies mode. Now players can fight off waves of the undead in the middle of a nuclear fallout. The new level is available immediately to owners of the $49.99 Black Ops II Season Pass on Xbox 360, which grants access to its four planned downloadable map packs.

Season Pass holders on PlayStation 3 and PC will receive this DLC at a later date thanks to Microsoft’s partnership with Activision.

While Call of Duty is selling extraordinarily well on the strength of its competitive multiplayer mode, it gained has a significant fan base who appreciate the Zombies game simply for its cooperative aspects. The Zombies mode is always exclusive to the Treyarch-developed versions of Call of Duty. The Infinity Ward installments usually include a mode called Spec Ops that features a variety of cooperative games, but never anything with the living dead.