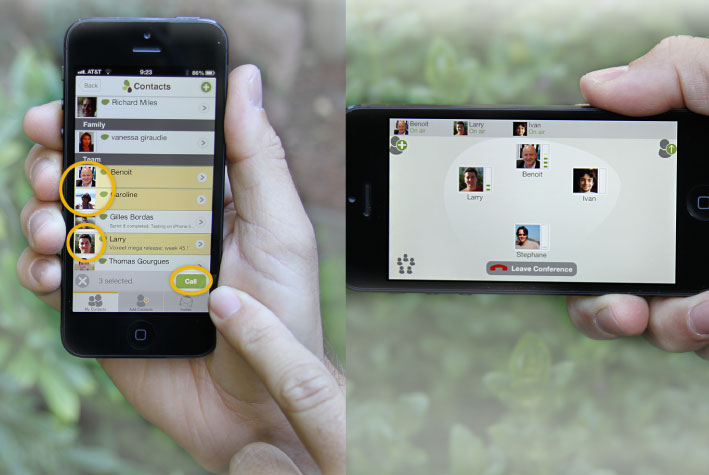 Conference calls are sort of the bane of my existence. I agree that they’re useful, and I’m content to just listen in on weekly meetings. But when I actually have to participate, it can be … frustrating.

Voxeet’s conferencing service aims to change that, as VentureBeat previously explained during the startup’s debut at the 2012 spring DEMO event, (where it was later named DEMO God winner). Voxeet offers crystal-clear voice conversations that you can manage and translate using a visual interface on Windows PCs, Android devices, and, as of today, iPhones.

Basically, when you start a conference call, Voxeet will enable you to switch from your PC to your iPhone without any disruptive beeping, background noise, or having to announce what you’re doing. You can simply switch devices without interrupting the overall call. There’s no need to redial into the call or entering in a string of pass code authorizations, either.

You can download the new Voxeet iPhone app today for free in the App Store, or download its existing Android app on Google Play.

Founded in 2009, the San Francisco-based startup has previously received $300,000 worth of incubation from Innovantic and about $235,000 in loans/grants from French governmental entities. Voxeet was also recently awarded $600,000 in IP communication services from iNetwork after winning the Voice App Igniter Challenge.