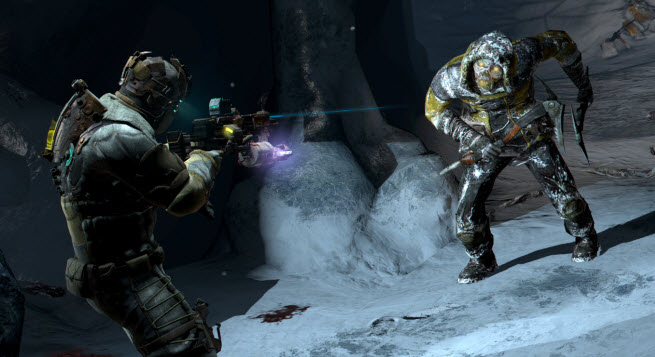 Dead Space 3 is not going to be an easy game. That was what I gleaned from a hands-on preview of the horror title with a sci-fi theme, coming from Electronic Arts early next year.

Set on the bone-chilling frozen world of Tau Volantis, Dead Space 3 is aimed at gamers who want to be scared out of their wits at the same time they’re slaughtering masses of horrible monsters. While some fans fear that it has too much action, I detected plenty of scary stuff in the demos that I’ve seen. I also noticed that it’s going to be very difficult to beat these bad guys. 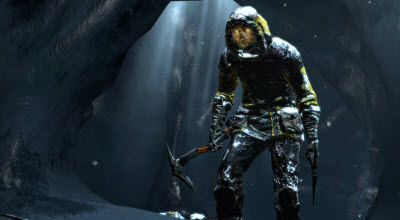 For one thing, the monsters, known as Necromorphs, come in all shapes and sizes. They can be gigantic and slow or man-sized and alarmingly fast. You also have to watch out for the weather. The blizzards are really going to annoy you, and so are the cliffs that limit your movement when it’s time to run away from the bad guys.

The story looks like it will be thrilling. You job is to stop a plague and save mankind. Easy stuff. Get some milk and cookies on your way back from outer space. The developers at Visceral Games promise a lot of epic moments, where you will scream your lungs out as monsters try to eviscerate you.

The game builds some tension by slowly ratcheting up the horror level. When you are walking through the blizzard snowstorm and you find wonderful shelter in a cave, that’s a pretty good clue that the Necromorphs are about to spoil your party. They jump out of the snow banks and try to rip you to shreds with their nasty limbs. You can buy yourself time by shooting off said limbs, but then they start crawling at you like pathetic little zombies. You have to put them out of their misery but also be careful not to run out of ammo. 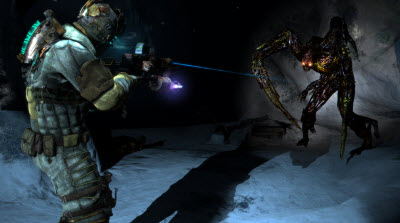 In one particular scene, I had to fight alongside my partner against a bunch of charging monsters. I got to pull out a big, heavy object that I could swing around in a great arc, smashing Necromorphs to pieces. But I also had to keep switching weapons and shooting all of the time at point-blank range to survive. This battle was so difficult we had to fight it again and again.

The Necromorph infestation on the planet is quite annoying, and it spawns all sorts of challenges. You play as the heroes Isaac Clarke and John Carver, who have to put their combat and engineering skills together. They scavenge for parts and assemble tools for their survival. That means that you have to smash every Necromorph to smithereens and then make sure you collect all of the loot from the bloody pulp. So you have to hunt for parts, build weapons, and share them with your buddy. I sincerely hope that I will be able to craft a bone-crunching weapon from a Necromorph body part.

The combat gets particularly uncomfortable when the Necromorphs grab you. Then you have to pound the A button as fast as possible to avoid being eaten. If you fail, you witness your own disembowelment. 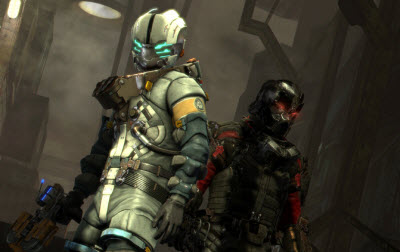 Clarke is the tinkering engineer while Carver is a military sergeant who is out for revenge. Guess who wants to blow the Necromorphs up more? Sometimes you want to play as one guy, and sometimes you want to be the other one. You have this option with the fully integrated drop-in/drop-out cooperative feature. Players can fight alone or team up with a friend at any time.

I was a little annoyed at the save system. When you die, you roll back to the beginning of a scene. So as I died alongside my buddy many times in that wonderful cave, I had climb up the same ladder over and over. And this wasn’t just any ladder. It was a ladder that I had to let down with my character. Meanwhile, I had to wait for my slow companion to scale up the ladder, lend me a hand, and pull me up. Now, I really don’t think that forcing me to climb up the same ladder over and over again is really all that fun. I don’t find it horrifying. I don’t consider it to be action. It doesn’t belong in this game. Game developers! Take that ladder out! 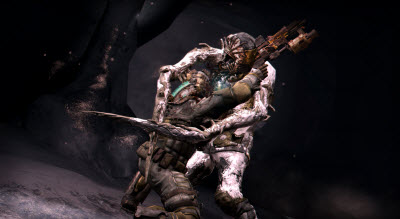 The game had one glitch that made it hard to stay alive, but hopefully Visceral Games will fix that by the time it ships on Feb. 5 in North America and Feb. 8 in Europe. Overall, this title is in excellent shape in terms of its look and feel. It will be available on the PlayStation 3, Xbox 360, and PC.

Dead Space 3 also features co-op voice commands for Microsoft’s Kinect for the Xbox 360. You can shout things like “Find partner!” or “Fire stasis!” during the action and the game will respond accordingly. During my demo, the EA producer was yelling commands to help me out while I played with the controller. Much like the commands with Mass Effect 3, they can help you play better, but they’re not required by any means.