Scud missiles and chemical warfare are a real threat that face the people of Syria as its government clashes with rebels who wish to oust the ruling party.

That’s not great subject material for a video games — or is it?

Endgame: Syria is a new game from developer Auroch Digital that explores the civil war. It’s a free game available online, on iOS, or on Android. It’s a simple game with lots of menus and text, and it explores the military and political nature of this conflict by showing how in-game actions effect both of those fronts.

It’s is part of the Game The News Project, which asks developers to explore topical subjects using games. In order to do this, the development time on Endgame: Syria was only two weeks.

“We wanted the events and actions in the game to mirror the real situation,” said Endgame: Syria designer Tomas Rawlings. “So while creating this experience, we were also continually looking at the news and adding or removing components to keep the content current.”

The simulation puts players in the role of leading the rebels against the regime of Syrian President Bashar al-Assad. Players must balance fighting the war with maintaining political support.

When designing Endgame: Syria, Rawlings researched the real war and discovered that several parties — many outside the country — stand to win or lose depending on how the sides choose to resolve the conflict. 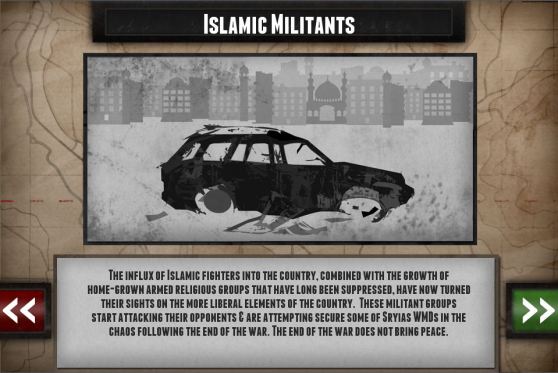 That got him thinking about using the game as a way to map the different paths this war could take and how that would play out for the people of Syria, the United Nations, Iran, China, Russia, and others.

“As a game developer, I’m interested in this situation and the medium that’s natural for me to explore it in is games,” said Rawlings in a presentation about Endgame: Syria. “And ‘game’ is just the term for the medium. If it’s more comfortable [for you] you can call it a simulation, an exploration, an interactive guide — [you can use] any of those terms that you are more comfortable with.”

We’ve recently seen another campaign that uses rapid game development to promote something: Dikembe Mutombo’s 4 1/2 Weeks to Save the World. That’s a game born out of an advertising promotion for Old Spice deodorants.

Each week, Old Spice’s advertising firm presents a folder of ideas and writing — often based on very current pop-culture references — to a development team led by Canabalt creator Adam Saltsman. They then spend a week turning those concepts into a game. It’s an amazing concept, but ultimately a silly one.

Game The News believes that the interactivity and malleability of games are an important way for people to learn about world events.

“We turned the war into an experience that people can follow along with and make decisions in,” said Rawlings. “And they have to understand the consequences of their decisions. And that’s really the key of how games are a good form to explore something.”