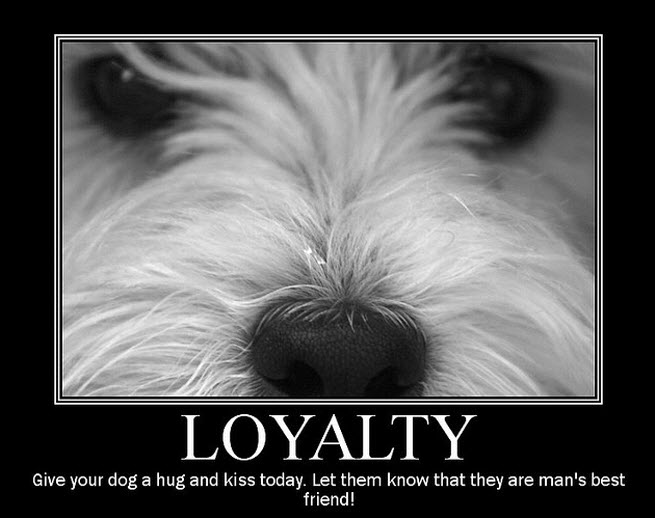 Customer loyalty differs widely among different categories of apps, and that should drive a different strategy for the app makers who create them, according to mobile analytics firm Flurry. Based on the study, it’s smarter to match your user-retention strategies to the type of app that you have in terms of frequency of use and loyalty over time. Apparently, communication and news apps have both of those in spades.

“Regardless of a company’s earlier success, thriving in the new mobile-app economy depends on engagement and retention,” wrote Peter Farago, the vice president of marketing at Flurry, in a blog post. “After acquiring users, the real battle to keep and ultimately monetize consumers begins. In the brave new world of ‘mobile first,’ engagement is the new battleground.” 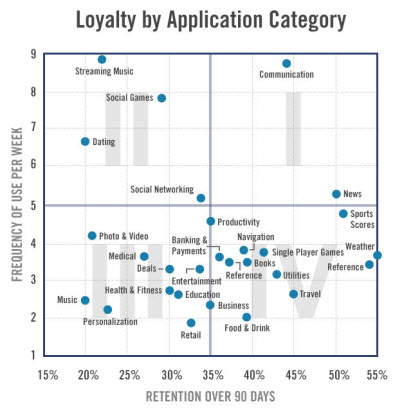 Three years ago, Flurry categorized users into a loyalty matrix. In that matrix and the new one (pictured right), Flurry measured the frequency of users per week against the percentage retention over 90 days. The result is a measure of loyalty by application category. Each category has different user engagement and loyalty characteristics, says Flurry. If companies figure out which category they belong in, they can then determine the right strategies for acquiring, retaining, and monetizing users.

Flurry said that communication and news apps have both high intensity of use and high loyalty (hey, let’s hear it for VentureBeat). Those two categories appear in Quadrant I, or the upper far right. These apps have stable, growing audiences and are therefore best positioned to generate ad revenue or charge a subscription fee. Consumers see them as having enduring value.

In Quadrant II, apps are used intensively but for short periods. They deliver value in short bursts and include streaming music, dating apps, and social games. People use dating apps intensively until they find a partner. Once they do, usage stops. The better an app is at matchmaking, the more people will churn through it and the higher the user-acquisition costs.

In Quadrant III, apps are used infrequently and have high churn. This is the worst of all worlds, with apps that are “ones and dones.” Personalization apps are an example in this category since someone uses an app once to change his screen saver. Once the setup is done, the user is unlikely to reuse it. Apps with this use pattern are best served with premium pricing models, where the consumer pays before accessing the content.

Finally, Quadrant IV includes apps that are used infrequently but deliver high value. These remain on a consumer’s device forever. A business traveler might find airline, hotel, and car-rental apps so valuable that he will keep them on the device. Like Quadrant I, this category is better suited for subscription and ad-supported models. They are more likely to retain users over long periods.

Flurry studied samples from more than 80,000 companies with 230,000 apps. The apps studied are used more than 1.7 billion times a week. Compared to 2009, 90-day retention rates have increased from 25 percent to 35 percent. Frequency of use has decreased from 6.7 to 3.7 now. That means that apps have higher quality and app makers are getting better at holding our attention longer.