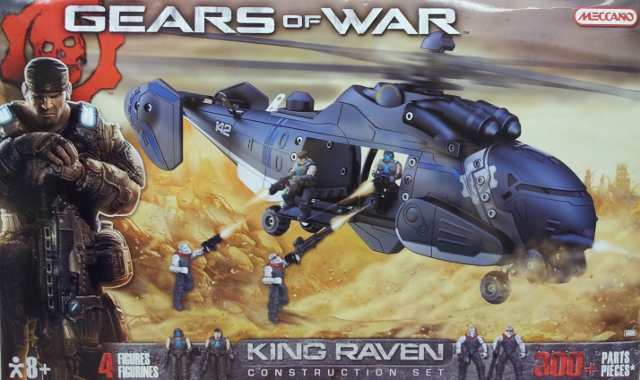 Gears of War is bombarding the childrens’ toy market this month. French toy manufacturer Meccano has created a range of construction sets based on the violent, Mature-rated third-person-shooter gaming franchise, and it is marketing them heavily at boys 8 and over. The sets are on sale at toy stores in the U.S. and the United Kingdom (one place you can find them is at Toys ‘R’ Us). Nickelodeon, Disney XD, and Cartoon Network have also been running advertising spots for the toys on U.K. television  in the lead up to Christmas despite a target demographic that should never have played the games.

Wandering around Toys ‘R’ Us with my two children last week, this marketing strategy and the in-store placement of the new Meccano range struck an odd chord. Nestled snugly alongside pictures of Sonic the Hedgehog and brightly colored constructable cars, Gears of War protagonist Marcus Fenix’s face staring out from its Meccano box looked strangely out-of-place. It made me wonder why such a range is being aimed at young children. 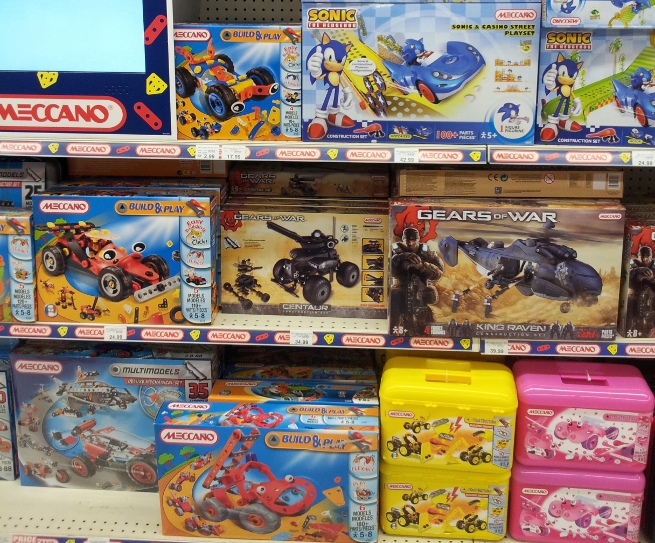 I contacted Meccano (U.K.) to ask why it’s targeting such a young audience, and whether it’s concerned about cross-promoting Mature-rated games to that demographic. “The Gears of War range is targeted at 8+,” said a spokesperson for Meccano. “Our focus is on vehicles from the game as well as characters and weapons, which is not dissimilar to Mega Bloks’ Halo models. The ambition of the range is to broaden Meccano’s appeal to younger modelers as well as to older modelers who are also gamers and who will be familiar with the 18+ game.”

The Halo Mega Bloks range is a similar concept to Gears of War Meccano line. First released in 2009, Halo Mega Bloks — based on Microsoft’s series of first-person-shooter games — are found prominently displayed in most major toy stores. It’s easy to forget that Halo, too, is a gaming franchise aimed at a mature audience.

“It would seem a tenuous proposition to aim [Gears of War] toys at 8 year olds based on a license they ‘shouldn’t’ know,” said Sean McGowan, a toy industry expert and senior analyst at Needham & Company, via email. “But aspirational marketing is nothing new, is it?”

“The success of the Halo toys tells us two things,” said McGowan. “Firstly, that kids like what their older siblings  — or even parents — are doing, and a watered down toy version lets them participate. Secondly, that collectors who are ‘of age’ like to have toys depicting their favorite properties.

“I can tell you that the median age of buyers of Halo blocks from Mega is much older than the average for their blocks, so maybe it won’t actually be little kids buying Gears of War toys. But, still, you have to wonder how it could be a responsible idea.” 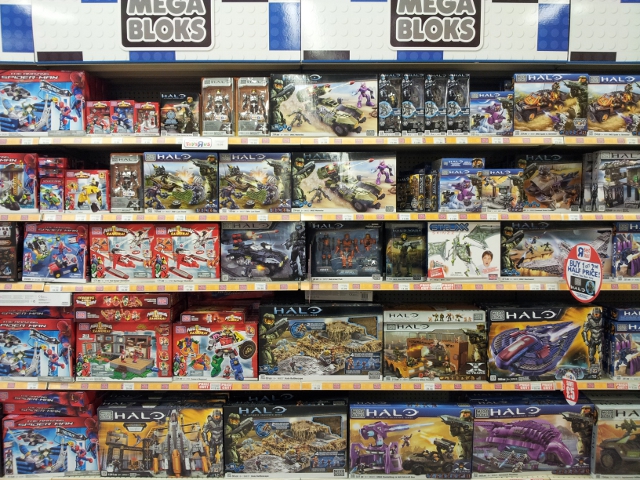 Epic Games: We don’t market Gears of War to children

I approached Microsoft to discuss the Gears of War and Halo toys and the implications of involving young children in the world of Mature-rated games. “Generally speaking, video game figures and collectibles are not necessarily created with a younger market in mind, so we would not look to comment on Halo-branded items,” said a Microsoft spokesman. It also declined to comment on Gears of War Meccano, leaving that to Gears developer and intellectual property [IP] owner Epic Games.

“It’s always been the stance of Epic Games that we don’t market the Gears of War series to children under the age of 18,” the studio said in a statement. “We do not condone the actions of Meccano, and we will do everything in our power to make sure it doesn’t happen again.”

When asked for more details on the license negotiation, the studio issued an additional statement: “Epic Games owns the Gears of War IP and we advise our licensees on high-level branding for the franchise. We vigorously support the ESRB/PEGI ratings system. If a licensee comes in conflict with that, we make every effort to correct the situation.”

That is a strongly worded response, showing that Epic Games is not at all happy with Meccano’s use of its license. What it means for the future of Gears of War Meccano toys, though, is not totally clear. 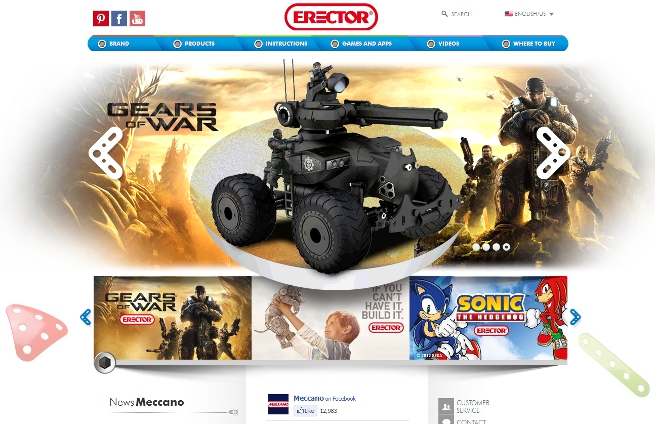 A case for the ESRB?

The Entertainment Software Ratings Board (ESRB) provides video game age ratings for the benefit of consumers, helping keep unsuitable games away from minors. But its jurisdiction doesn’t extend to related products, meaning the sale and marketing of these toys do not contravene ESRB regulations.

“ESRB enforces guidelines that prohibit inappropriate target marketing of Mature-rated games to children,” Eliot Mizrachi, the ESRB’s director of communications, said in a statement. “These restrictions pertain to ads placed in media [in the U.S. or Canadian markets] whose audience is known to be composed of a certain proportion of children but do not apply to ancillary products that may be associated with or related to a Mature-rated game.”

The European equivalent of ESRB ratings is the PEGI system, overseen by the Video Standards Council. When asked about the Gears of War toys, the VSC was unconcerned . “There does not appear to be any attempt to directly use the toys as a means of selling the game which, in any case, is legally restricted to 18-year-olds and above,” VSC Communications Officer Gianni Zamo said.

With no guidance from the ESRB or VSC on the sale of such toys, responsibility seems to fall on the shoulders of individual companies. Where there is a clear market, though, it will inevitably be targeted. Mega Bloks’ success with Halo has set an example for other mature gaming franchises to follow, and Needham and Company analyst Sean McGowan said he would “not be surprised to see MegaBrands do toys tied to Call of Duty, too, considering their link to Activision through Skylanders.”

For the time being, Gears of War seems set to continue its infiltration of the toy store, with blind-bagged figures joining the fray. Soon being traded in a schoolyard near you.

You can see the initial TV advertisement for Meccano Gears of War below. Meccano/Erector (U.S.) director Robert Grey told me there is no plan to run such television spots in any North American market.