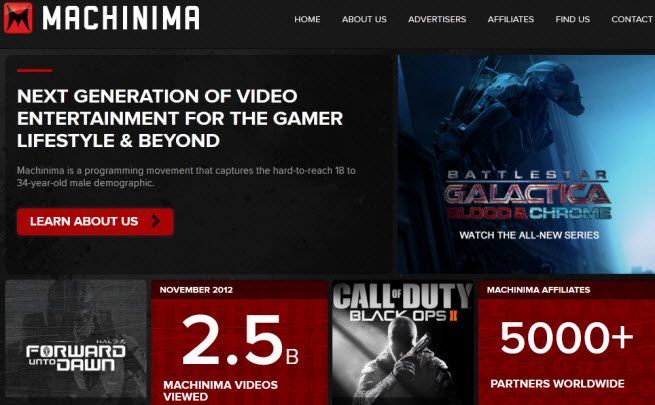 Machinima has seen huge growth, with 2.5 billion videos viewed per month. But the video entertainment network isn’t immune from the slowdown in the traditional video game business. Today, it confirmed that it laid off 20 employees, or 10 percent of the company.

The Los Angeles company has quickly become the No. 1 entertainment channel on YouTube, thanks in part to support from the young male gamers demographic of ages 18 to 34. Back in December 2011, Machinima had 1 billion monthly video views. Now it has well above 235 million monthly viewers.

But the its fortunes are evidently tied to those of traditional game companies, which have also been hurting lately as social, mobile, and online games eat away at the core business. Rob Smith, editor-in-chief of Machinima, told game news site Joystiq that 23 people out of 200 were laid off. They were across programming and production. He also said the company has 15 job openings.

“This is growing pains. Machinima has grown a lot in a short amount of time. We had to look at the business, look at where we’re focusing,” Smith said. “It has hit the editorial group, but we are still doing editorial coverage in a slightly different way.”

Gamers tune into everything from talk shows to “machinima,” or animated videos created by filming the actions of video game characters on screens. Gamers also use Machinima.com to create original shows and show off their exploits in popular games. Microsoft used Machinima to debut its five-episode live action series, Halo 4: Forward Unto Dawn, this fall. The company is backed by MK Capital and Redpoint Ventures.

“I just found out I am no longer employed,” tweeted Machinima.com editorial manager Bill Shibley. He added, “Along with many of my friends.”