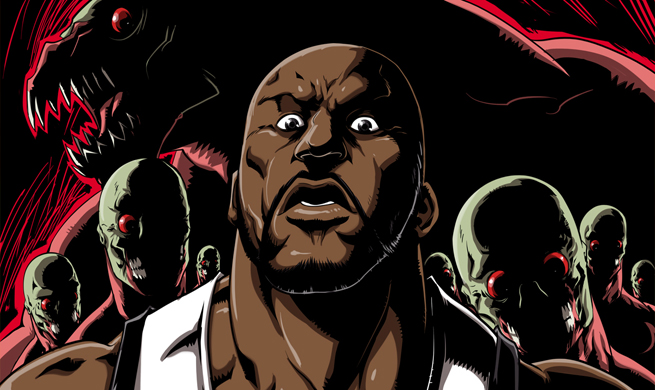 We can all agree on this: 18 years was too long a wait for a follow-up to Shaq Fu.

That 1994 fighter, featuring then-NBA superstar Shaquille O’Neal as a child-rescuing, kung fu messiah, became legendary as one of the worst video games ever conceived by man. It’s a go-to implement for CIA torture, a negative example even when applied to other negative examples. At least one website has dedicated itself to collecting and destroying all known copies. Remarkably, Shaq hasn’t headlined a game since.

Mobile developer Hiptic Games, the creator of popular slash-em-up Go Ninja, has jumped on the grenade and piled on the cheese for ShaqDown (due by year’s end for iOS and Android), a side-scrolling monster mash staring The Diesel as humanity’s greatest warrior. It’s not a sequel.

“When we were working on the game, we codenamed it Shaq Fu 2,” says Long Vo, Hiptic’s cofounder and creative director. Nobody guessed the incredible truth behind that description. “This game is set in a postapocalyptic world where Shaq has become a legend, and it’s up to him to save humanity from mutant zombies.” Vo cites influences that include Fist of the North Star, Resident Evil, Mad Max, and everything George “Dawn of the Dead” Romero’s ever done. 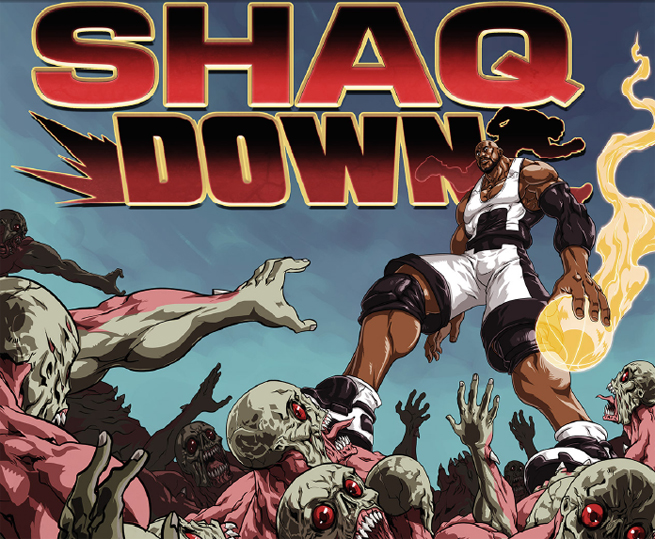 “They saw our previous game and wanted us to create something in the same vein,” says Vo. Outside of that, One Spear gave them free reign. So did the big man himself. “Shaq told us to have fun with it.”

If this sounds too crazy to be true, it is. And it’s true.

Naturally, Vo did “a lot of research” on Shaq Fu before attempting to top it. Over-the-top it, actually. The Hiptic team decided to go the full gonzo, throwing thousands of undead scumbags and three big bosses against the supreme ass-kicking powers of The Justice Bringer … Shaq! And he doesn’t always roll alone, either. Powerful celebrity allies like three-time world wrestling champ Lee Kemp come in to bring the pain on an epic scale.

Vo also addressed the one and only complaint ever leveled at Shaq Fu. “The controls were terrible,” he says. Fortunately, Go Ninja received much praise for both its controls and its demon-ninja killing. Vo says he brought those sensibilities forward to ShaqDown. “Our game is easy to play, easy to learn, and lets you kick a lot of ass.”

“We wanted to create a pick up and play actioner,” says Vo, “something you can turn your brain off and let your instincts kick in and take over.” Merciless zombie slaughter also earns “Shaqra” towards unlocking Survival and other game modes.

Vo admits his time at Capcom trickled into ShaqDown’s super-human strength and mystical abilities. “We wanted to give the player a sense that Shaq could be from that universe, with powers and abilities like any other world warrior.”

But mainly, it’s Shaquille O’Neal being super awesome and destroying armies of evil. “If you can get on board with that,” says Vo, “then everything just flows.”