Raspberry Pi announced the Pi Store today on its blog, saying that the app store will make it easier for newbies to get into the Raspberry experience, and will also provide the ability to for people to share their creations … maybe even making a little money on the way.

The tiny computer from the non-profit Raspberry Pi foundation first shipped in April of this year, but only reached volume in July. The Pi is a tiny computer that fits in the palm of your hand, but contains a 700 MHz processor, 512 GB of RAM, and Ethernet, HDMI, USB, and audio ports. It runs a version of Linux — including one titled “Raspbian wheezy” — stored on a SD card, like one in your camera. 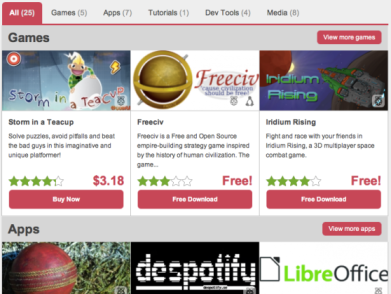 Current apps on the store include Freeciv, an open source sim game, Iridium Rising, a 3-D space fighter game which is also free but not open source, and LibreOffice, a full Office-compatible productivity suite. 23 titles were announced this morning, and two more have already been added today.

Developers who want to submit apps or content to the Pi Store can upload compiled binaries, raw Python code, or simply pictures, audio, or video. Pi owners will find that the store’s recommendation engine will show them the best content that, over time, will become more customized to their likes and dislikes.

The Pi Store is visible online here, and is built into updated versions of the latest Raspberry Pi operating systems. Technically capable people can also add it to existing installs by jumping into the command line and typing a Debian-style command: sudo apt-get update && sudo apt-get install pistore

Adding apps to Pi will definitely make it more usable and useful … and could make the operating system as beautifully functional as some have made their Raspberry Pi cases.