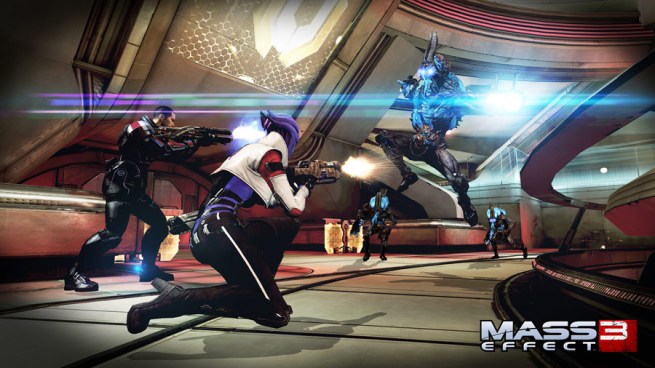 Mass Effect 3, the bombastic conclusion to Electronic Arts’ role-playing-game-meets-shooter trilogy, promised us closure. It promised us the chance to finish the galactic fight and say goodbye to protagonist Commander Shepard and his alien allies.

But developer BioWare doesn’t want us to move on just yet. Controversial ending and Internet flame wars aside, Mass Effect 3 maintained relevancy throughout the last few months with a surprisingly robust multiplatform downloadable-content strategy, which includes the recently released Omega single-player experience.

So is a trip back to one of Mass Effect’s beloved locales worth putting aside those sexy year-end releases for a few hours?

It depends on how much you love the space-faring saga.

Welcome back to the madness that is Omega
Mass Effect 2 introduced players to the criminal-friendly wonderland known as Omega and its iron-fisted ruler, Aria T’Loak. You’ll return to the shady, asteroid-based space station for some spirited firefights during BioWare’s latest downloadable ME3 side quest.

You also team up with the aforementioned Aria and a new, extremely capable associate, which I’ll refrain from describing so players can enjoy her reveal. 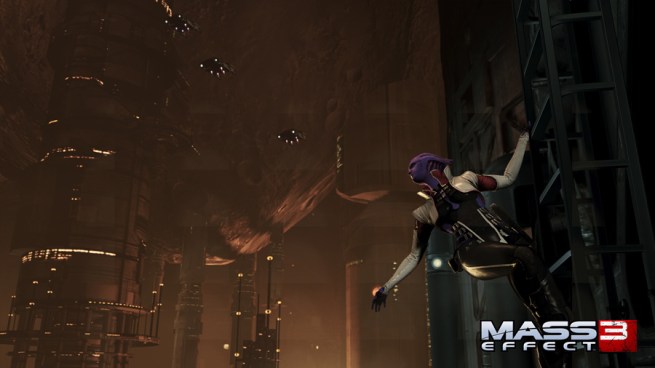 Throughout the relatively meaty mission, you revisit familiar places that you encountered in ME2 along with some never-before-seen areas. And for those who enjoyed the Aria character, you get to catch up with the cold-blooded asari assassin slash crime lord while getting some juicy insights into her complicated past.

If you like the combat, you’ll like this DLC
Omega is all about the gunplay, so keep that assault rifle loaded because you’re going to need it to mow down platoon after platoon of Cerberus bad guys. Thankfully, BioWare keeps the combat varied with some new enemy types, including the survival-horror-inspired, experiment-gone-bad adjutants. The first time you meet these Cerberus-bred killers is pretty memorable and reminiscent of a creepy shooter like Dead Space.

All the action equates to some fun, trigger-happy gameplay that will satisfy those who enjoy ME3’s refined fighting mechanics.

The whole thing is a little pointless
Omega’s premise is shaky at best. You, playing as mega-hero Shepard, agree to help out the dubious Aria regain her station from the antagonist Cerberus general Oleg Petrovsky … in the middle of an everything’s-at-stake, galaxy-wide war.

Commander Shepard has more important things to do — primarily saving every organic being from extinction. Why would he concern himself with helping a seedy individual like Aria retake a notorious yet pretty insignificant blip on the star map?

Even worse, Aria, who has no leverage, gives out all the orders throughout the entire mission. She sets all the ground rules and forbids you from bringing anyone from your crew. Again, why would Shepard let this happen? Aria’s promise of ships, troops, and resources seems hollow at best, especially since her meager fleet could barely penetrate the Cerberus blockade surrounding her station — after getting kicked out in the first place.

The ridiculousness of the situation annoyed me a few times as I played through the DLC. On many occasions, I wish I could throw some of Aria’s signature F-bombs right back in her face.

After all, who does she think she is?

If you don’t like the combat, you won’t like this DLC
Like I said, you fight a lot in Omega. Unlike previous DLC releases, which involved investigation-type palette cleaners, you won’t find any of that here. After a couple of hours, the “clear this area of hostiles and move on to the next area” approach became stale. 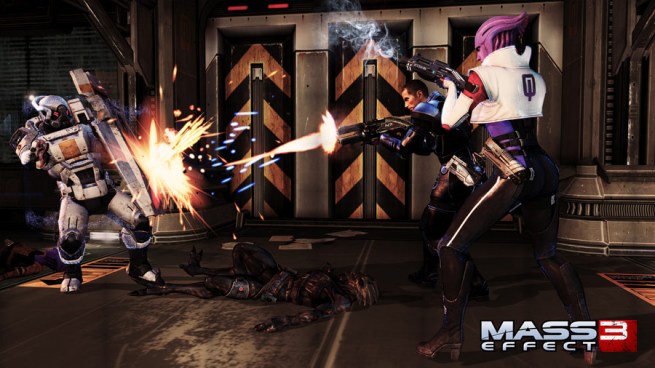 While the new enemy types help keep things interesting, they’re not particularly challenging foes. The adjutants came with a lot of horrific hype, but they were pretty easy to dispatch. And the final battle’s setup and payoff are ham-fisted and anticlimactic.

Plus, not having your crew around detaches the events from the overarching plot. Yes, it’s fun to have some new, impressively powerful squad mates, but it would be nice to get some additional scenes with a few of your trusted comrades as well.

Mass Effect 3 is a spectacular game — one that deserves a lot of credit, especially during this time of the year. Unfortunately, the controversy centered on its hotly debated ending has overshadowed the impressive downloadable content that BioWare introduced.

I’ve already challenged EA to make people care about Mass Effect again. While Omega has its good parts, it doesn’t bring enough of that signature storytelling to the forefront. I love pulling the right trigger to shoot dudes, but I enjoy using the same button to interrupt a cutscene even more. This DLC doesn’t understand that.

On the positive side, the fans who play through Omega are probably the ones who still love the franchise and are always willing, able, and happy to take on another mission. Those loyal Shepards will find a flawed yet enjoyable escapade.

Mass Effect 3: Omega released on Nov. 27, 2012 for the Xbox 360, PlayStation 3, and PC. The publisher provided GamesBeat with an Xbox 360 download code for the purpose of this review.