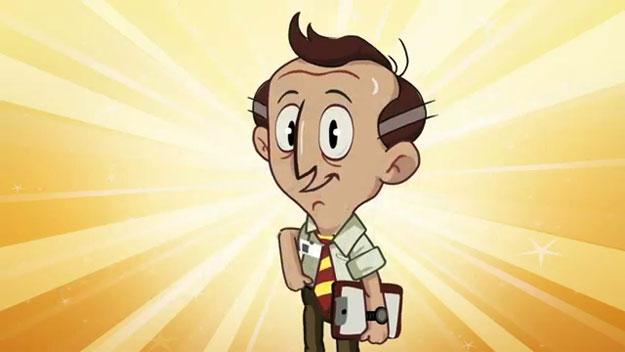 If the goal with this freemium iOS release was to re-create the experience of being an actual middle manager, developer Double Fine succeeded. And that’s not quite a compliment.

I’d forgive you for thinking that Middle Manager of Justice would be anything like Elixir Studios’ amazing Evil Genius, where you play as the head of a clandestine criminal organization vying for world domination. All the trappings of the genre (organization management sim) seem present on the surface: You’re in charge of directing a group of superheroes as they fight crime around a featureless city, building up an office with various support faculties in the process.

But this ain’t no Evil Genius.

As the head of a profit-challenged branch of Justice Corp., you’ll be a fine Bill Lomberg: You’ll do “desk work” that’s hardly productive, you’ll delegate the important tasks to others, and you’ll take forever to do anything at all. Sounds a lot like the oppressive claustrophobia of an endless, gray cubicle farm, doesn’t it?

The feeling extends to Middle Manager’s design, which is really no different than any other free-to-play title: Do you value your time or your money more? I mean, who doesn’t love making purchasing decisions in the middle of what’s supposed to be an engaging experience?

Jokes and jokes and jokes and ha ha ha ha
The premise is entertaining in itself, and Double Fine has put in enough humor to give me a chuckle or two. But this ultimately feels like a gag stretched way too thin. How much material can you really derive from a mediocre salaryman with a comic-book backdrop? Not enough, apparently.

It’s pretty?
Middle Manager of Justice has a clean, Saturday-morning cartoon style that fits well with the presentation. It’s nice to look at. What more can I say? 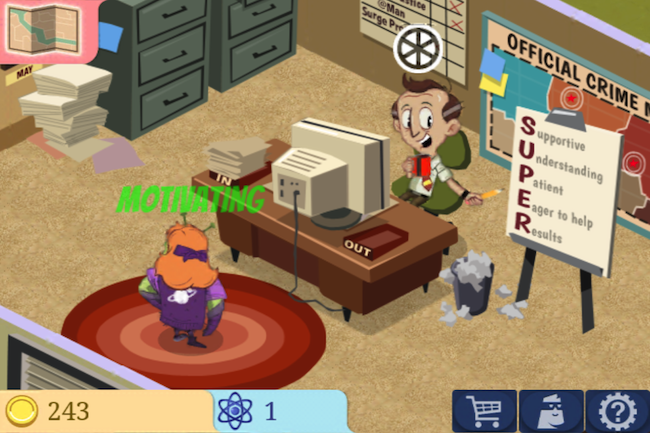 Time or money, take your pick
Middle Manager of Justice has three resources: coins, “superium,” and time. You earn coins by keeping portions of the city happy, defeating thugs and henchmen in battles, and doing “desk work.” Coins let you upgrade your base facilities and buy items and equipment. You earn superium for knocking out supervillains, which you need to hire more superheroes. And you spend time when you want to increase any stats or abilities, sometimes upward of 15 minutes. Yeah.

Here’s the insidious part: You can spend superium to instantly level-up, which you can buy from the in-game store with real-world cash. And since superium is difficult to come by through regular play (and you want to save it for hiring new heroes, anyway), you’re stuck either waiting a lot or paying a lot. How is this entertaining? How is this good game design?

I don’t mean to single out Middle Manager of Justice because this is the core philosophy that nearly all freemium games employ. The mechanics involve a lot of long timers counting down while you’re given busywork too fill in the waiting period. And if you’re not patient enough, you can fork over actual dollars for some space bucks to speed things up. Is this really the future?

Combat is rote and joyless
Even if you’ve elected to pay your way to victory rather than wait hours for your heroes to train on punching bags and plasma-TV-equipped treadmills, you’re still stuck fighting these monotonous battles. Your heroes exchange blows with thugs and henchmen, who sometimes have funny things to say before the fists start flying. You can use items and abilities to give your guys and gals an edge. That’s all there is to it.

If anything is a clear indication that combat was an afterthought, it’s that you can delegate these tasks, which puts the events on the world map with a 1-minute timer. Still, it’s always faster to just handle these yourself, so you’ll end up overseeing each fight anyway. Sending out your heroes on their own is risky, too, because you can lose easily based on a percentage-to-win displayed before committing to the engagement.

But in the end, you have to take on the bad guys in order to fill out a villain meter to progress through the city. Combat ends up just being an unavoidable chore.

You can’t lose
Middle Manager of Justice has no fail state. You can make all the wrong decisions and do all the wrong things and still make it through the end just for showing up.

On the city map, crime events each pop up with a 2-minute timer and box with four stars. When one counts down to zero, it loses a star. As that happens, the smiley face, indicating the happiness of the area, drops from a high of ecstatic green to a low of bawling red. These different levels relate to how many coins you earn from each section of the city in intervals (which you have to tap to collect — another common iOS mechanic that’s entirely tedious), but you can’t ever lose a borough even if you ignore it forever.

That’s a missed opportunity and is likely the result of the business model negatively affecting the game’s design. I mean, Double Fine can’t very well let you lose a game after you spent all that real money on space bucks used to speed up your progression. You’d be mighty pissed!

Oh, and sure, you can lose individual fights with the bad guys. But your heroes will just return to base and need a nap to restore their health bars, which takes time. And you can “motivate” them to increase their morale after having lost (using the same smiley-face scale), which is just more waiting around. 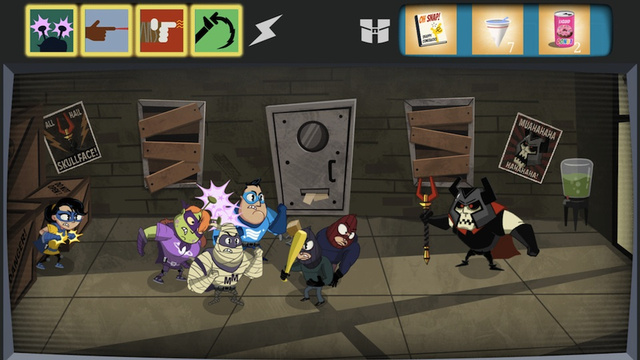 I have to wonder whether Middle Manager of Justice is just an elaborate joke. At one moment, I thought the game was self-aware of just how nakedly exploitative the design is: when a thug responded to my heroes’ criticism of his criminal behavior with a plea to give him a break because of his in-app purchase addiction.

But this isn’t a concise examination of the sad state of affairs that is free-to-play game design. Middle Manager of Justice goes on and on and on. Playing feels like walking a treadmill on the slowest speed with the best option being to just buckle down and pay for gastrointestinal surgery. But then, what’s the point? You’re paying to not play the game.

Middle Manager of Justice released on iOS devices on Dec. 13.