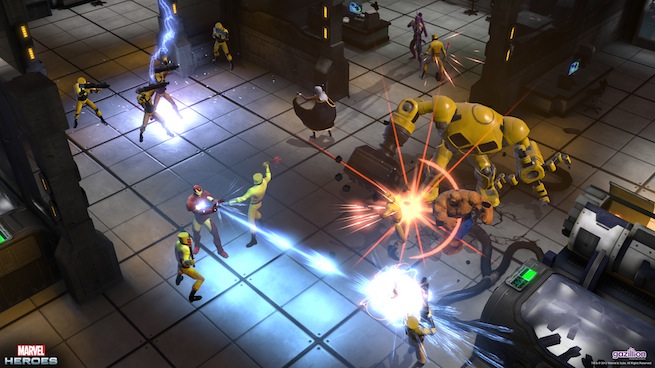 I just ran around Hell’s Kitchen with Iron Man. Man, were we faced a lot of muggers and dudes with automatic rifles. Oh, and Electro. Can’t forget him. I fought him for about 15 minutes, grinding his health down to the halfway point, fighting him and waves of annoying muggers, when Iron Man showed up. We kicked Electro’s ass. Then I died, since a mugger snuck up behind me and shot me with an automatic weapon.

Waking up on the rooftop of a nearby building, Agent Coulson let me know that there was another crazy evil villain in the subway, Shocker, who I needed to take down. I headed back down the stairs to the streets once more, finding even more muggers and thieves to take down. I threw a car at a couple of groups of them, killing them all. In fact, the body count is getting pretty thick around here.

I wonder where Iron Man went?

Marvel Heroes is an action role-playing game with some massively multiplayer online features as well. The beta version begins with a tutorial set on The Raft, a fictional prison facility in the Marvel Universe. The tutorial introduces the mechanics of the gameplay, like clicking on the ground to move your character, left- or right-clicking on enemies to deal one of two customizable attacks, and the like. The whole experience feels a lot like Diablo, complete with loot and cash pickups. Marvel Heroes is fixed with an isometric perspective, with no annoying camera to fiddle with.

This free-to-play game will be available for Mac and PC on release, though the beta is PC only at this point. It’s being developed by David Brevik (Diablo, Diablo II) at Gazillion Entertainment, the folks behind the equally free-to-play Marvel Super Hero Squad Online. According to the press materials, Gazillion has secured the rights to use all 8,000 Marvel characters in Marvel Heroes, though as of writing, only 26 are known to appear — this includes Thor, Hulk, Human Torch, Spider-Man, and Daredevil. The story, such as it is, is written by well-regarded comic book author Brian Michael Bendis and deals with Doctor Doom stealing The Cosmic Cube (aka The Tesseract from the movies) in order to, well, rule the world.

New Hero characters (toons in MMO parlance) will cost money, as will customized outfits and such. You can swap between your roster of Heroes at any time, which makes things both interesting and potentially hilarious. The game uses the Unreal 3 Engine to render effects, making things like destructible environments and interactive objects de rigueur. It will have public combat zones, where players can gather and fight randomized bosses, goals, and enemies, social zones like towns, and solo or party-based dungeon instances that will scale in difficulty depending on how many players are in them.

I played as the Scarlet Witch, because magic. I ran through the Raft tutorial mission, blasting generic HYDRA henchmen with my two magic bolt attacks, clicking along the ground to run through the maze of generic-looking corridors. I hacked and slashed and lobbed generic barrels at bad guys.  At the end of the tutorial, I totally killed Green Goblin. I’m guessing he’s not down for good, though. The fight was a bit too easy for so final a result.

Agent Coulson greeted me on a rooftop in Hell’s Kitchen. Marvel Heroes started to feel a lot more like Diablo, with experience points, health bubbles, various costume crafting materials, and different costume additions popping out of the downed baddies. The streets all started to look the same, too. In fact, there’s a bus stop in two locations in Hell’s Kitchen that for the life of me look exactly the same. I had to check my map to make sure I hadn’t just run in a big circle.

I grabbed a few more heroes at this point and gave them a shot. With my publisher-provided credits, I bought Ben Grimm (The Thing), Iron Man, and Storm of X-Men fame. As The Thing, I punched, face slammed, and ground pounded my way through more mobs of generics. As soon as I started playing as Iron Man, though, Iron Man showed up again. We were a pair of Iron Men, blasting generic henchmen with our repulsor beams. I can’t wait till there are more people online, as I can totally see an entire guild of Iron Men rolling down the street, blasting generic henchmen or taking on an iconic super villain like Electro.

Overall, if you’re looking for a simple grind and slash game with a Marvel coat of paint, you’re going to like Marvel Heroes. Click, kill, run around, pick stuff up, level up, repeat. There’s nothing wrong with a game like this; we’ve all played it before and liked it.

If you want a superhero game that functions on a story or character level, this isn’t it (so far). The characters are indeed iconic, but aside from in-game one liners that vary in quality, there’s not much about your avatar that is any different from a dozen other games out there. What makes The Thing a great character isn’t just his smart ass wit; it’s his humanity. And ultimately, at least during this beta period, Marvel Heroes is missing the boat.  Perhaps I want too much, but with a company as recently successful in the movie media as Marvel is, I was hoping for a little of that humanity to filter into a new video game using the Marvel universe, even a free-to-play one.