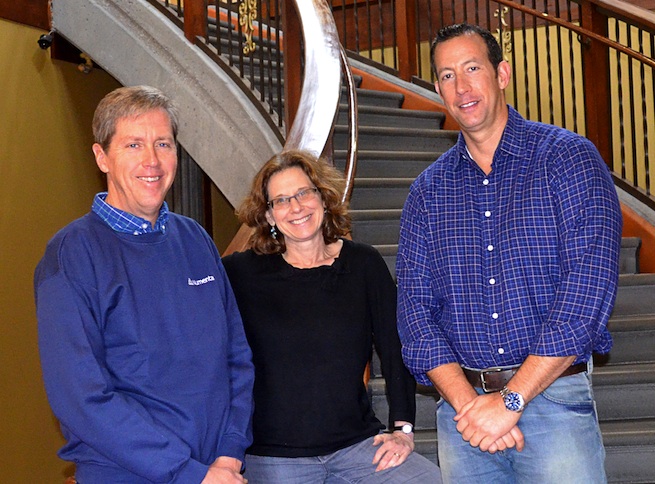 Imagine a world where every machine — from the smart meter to the cell phone — is designed to mimic the human brain by getting smarter over time.

A new “big-data” product called Grok promises to make those brainy machines a reality. It’s the first product from Numenta, which Palm cofounders Jeff Hawkins and Donna Dubinsky started in 2005. Numenta recently announced its technology, and now it’s brought new leadership on board prior to going from beta testing to general release. New chief executive Rami Branitzky (pictured above, right) is a former executive at enterprise software behemoth SAP.

But the real brains behind the technology is Hawkins (pictured above, left), a neuroscientist and technology entrepreneur, who I spoke to recently by phone. He painted a vision of an urban environment where “everything is intelligent, everything is learning.”

Hawkins has a knack for predicting the future. Two decades ago, he told a group of engineers at Intel that momentum would shift to the mobile space, and people would carry tiny computers in their pockets. “That talk was one of the worst-received talks I ever gave. I don’t think anyone believed me,” he revealed during a recent keynote at the International Symposium of Computer Science. During his subsequent 15-year-long “side-track” into mobile computing, Hawkins proved critics wrong when he invented the Palm Pilot.

Grok uses algorithmic frameworks to find trends in scattered data and make predictions about what patterns come next. Instead of analyzing mountains of data that companies are storing, it is one of the first to work off streams of real-time information from sensors.

“There is an explosion of things that are wide and connected [and] an emphasis on storage and processing all that data,” Hawkins said. “People are storing a lot of data but not solving the problem of what to do with it.”

He refers to technology giants like EMC and NetApp that specialize in storing vast quantities of noisy data. The latest technology products to hit the market are designed to go one step further than this by making this data useful to businesses and government agencies. From SAP with its next-generation database to a venture-backed startup like Platfora, there are dozens of contenders in the increasingly crowded market.

But what’s unique about Grok is the automation layer, and its continuous ability to learn. The product can be fed into companies’ existing control systems to automate processes that previously required manual adjustment. Instead of reacting to problems, users can anticipate them and optimize accordingly.

Grok is currently being tested on a few customers in the ad-tech, video processing, and energy management worlds. One global energy management company is using Grok to predict energy consumption in a building every hour for 24 hours and adjust output accordingly. Likewise, publishers and mobile app developers are leveraging the product to boost ad revenues by ensuring that inventory is optimally placed across the various ad networks.

Hawkins told me the most exciting challenges are “green-field,” meaning there’s no legacy technology solution to displace. “Once we have the data source, within half an hour we will begin to generate results,” he said.

This isn’t too disimilar to the way the human neocortex, the part of the brain that includes the perception and reasoning functions, discovers sensory data. In his body of work, Hawkins argues that the brain is a big data engine– it’s a sophisticated predictive modeling system. The brain has to learn everything by processing a continuous data stream of events. Just like an intelligent computer, it develops a model to make predictions, detect anomalies, and take action.

Given Hawkins’ reputation in the tech community, customer acquisition shouldn’t be a problem. He became widely-known with the success of his book On Intelligence, which delves into the basics of neuroscience and draws parallels with next-generation computing. “When I wrote it seven years ago, I was approached by technology companies — potential customers — but I didn’t have anything to sell,” he said.

So Hawkins founded Numenta, the Redwood City-based predictive software company, and brought on former Palm Computing CEO Dubinsky (pictured above, center). With an expanded team and new product, the internally-funded company is also on the look-out for traditional sources of capital and strategic partners.

New CEO Branitzky will be steering the company to new sources of revenue. “I have seen a lot of enterprise software,” he told me. “I know where the gaps are in the space.”

For its first customers, Grok has improved top-line performance for its first customers by at least 10 percent. With positive feedback from the beta, the team feels ready to start selling the product in the first half of 2013. They are planning to market to small- to medium-sized businesses that do not have the budget for a data scientist or data service team. According to Branitzky, these companies typically have some kind of “prediction problem,” which is where Grok comes in.

Echoing the rise of mobile technologies, venture capital firms and large companies poured millions of dollars into big data technologies this year. And yet, Hawkins feels he’s an early arrival to the party, and we haven’t seen anything yet in terms of what this technology can do. “We’re definitely not entering into a market that has been around for a while,” he said. “This is an unmet need and our customers have no solution.”