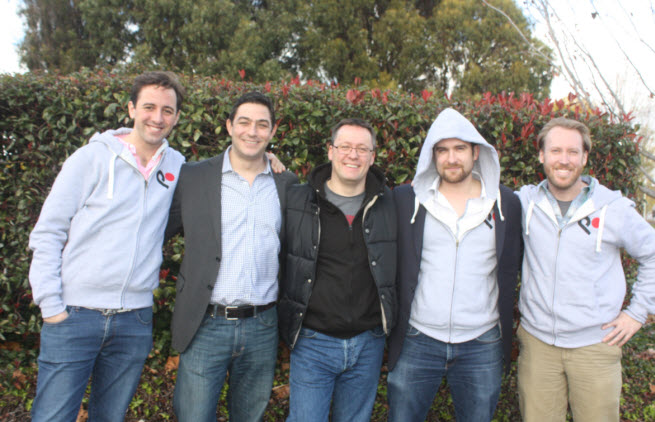 In the wake of recessions and the rise of e-commerce, empty shops line the streets of every community. Retailers try to rent them out as “pop-up stores,” temporary shops that operate for a few weeks during a holiday season. But it can take six months to book a store that might operate for just a few weeks. 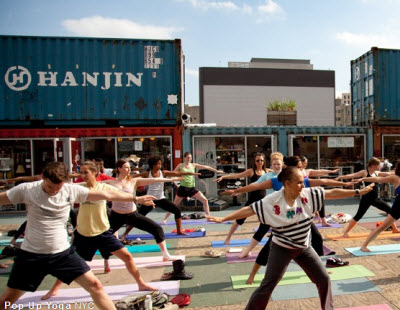 We Are Pop Up is a London-based startup focusing on renting out empty commercial space to tenants who want to operate on a temporary basis. This enables seasonal businesses, like yoga studios that rotate from place to place. It also enables tenants to create imaginative “experiential retail” location such as stores for product launches or tryout restaurants. It sounds like Airbnb for retail shops and commercial real estate landlords, but it doesn’t have all of the risks that its consumer-oriented cousin has.

“We see a shift toward short-term retail property rental,” said Nicholas Russell, the chief executive of We Are Pop Up, in an interview with VentureBeat. “The answer to this problem is software that can scale. We want to make renting a pop-up as easy as booking a hotel room.”

The company’s team showed up at Facebook last week as part of a tour. We Are Pop Up is part of the Springboard accelerator, a firm that is dedicated to highlighting startups from Silicon Roundabout, the nickname for London’s startup scene.

The team stages pop-up meetups in cities where it has business meetings. That stirs up new clients and helps tenants and landlords get together to create “flash stores” that come and go as needed.

Economically, empty space creates a huge overhang that hurts everyone. In the United Kingdom, a retail chain once had to have 300 stores to cover the whole country. Now it takes about 70 stores, Russell said. The London retail vacancy rate is about 14.4 percent, according to Local Data Company.

“While landlords wait for long-term leases, their operating costs are high and the costs of doing each transaction are also high,” Russell said. “If you can only fill a space for a few months, nobody is interested.”

We Are Pop Up can arrange for third-party insurance as necessary, in case a tenant trashes a property. But the landlords are the ones who pick who can set up shop in their locations.

The company is testing the concept in London first. If all goes well, it will try New York and San Francisco after that. 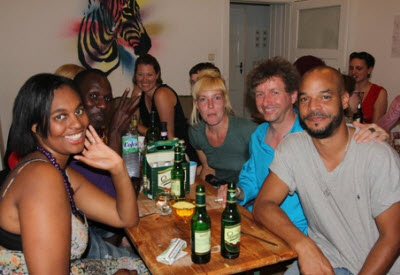 So they have the pick of the litter when it comes to finding quality tenants. The landlords want somebody who has a vision to turn the space into something beautiful that will attract people, if only for a short time. When you think of who wants to do this, the answers are plentiful. Artists can set up temporary galleries. Food trucks could set up a place with a real kitchen. Zoe’s Ghana Kitchen, pictured right, is a pop-up restaurant in London — but it is only open one day a month in another restaurant.

One supper club, the Hillside Home Supper Club raised money on Kickstarter to take over a restaurant. Brands can rent out a space on a temporary basis to try out a new concept without actually hurting the brand name. Samsung opened up temporary stores to sell its new Galaxy S III smartphones. Online-only retailers might also want to create a temporary location in order to handle the chore of getting product to consumers during busy seasons. (That’s ironic, since the online retailers are putting some physical stores out of business). The trend is dubbed online-to-offline, or o20.

“We proved that the model worked in a matter of days,” said Greg Hinch, the lead engineer at We Are Pop Up and a specialist in business-to-business web platforms.

Mike Salter, a creative director at the startup, has a background in fine arts. He organized a pop-up meetup for artists.

“I looked for gallery space for years and couldn’t find it. A lot of people are in the same position,” he said. “In San Francisco, it takes six months to get a location open.”

Consumers like pop-ups as well as the landlords do. People can shop at pop-up fashion stores and be assured that they will get something that no one else will have. Landlords need a way to manage their portfolio of products, as if they were trading stocks or booking hotel rooms.

We are Pop Up makes money by charging subscription fees for landlords, who pay for the right to browse through tenant listings. The going rate for three months of the service is £1,500, or $2,426 in U.S. currency. Tenants register and describe where they want to be in the general vicinity of a city. We Are Pop Up refined its model while going through the Springboard accelerator, which, in exchange for equity, put the company in touch with more than 150 mentors. We Are Pop Up has four full-time employees and has raised seed funding of $189,000. It is seeking another $750,000 in funding.

“Demand is high,” Russell said. “This is the next wave of business.”