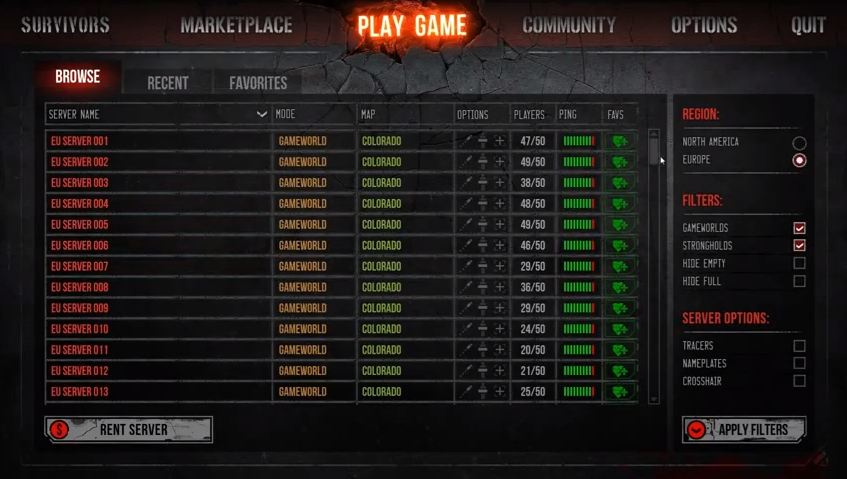 It’s a game about survival featuring wide-open terrains, zombies, and dozens of other real players. No, it’s not the hugely popular DayZ mod for Arma II. It’s a startling similar game called The War Z — and gamers aren’t happy with it.

Developer Hammerpoint Interactive released The War Z on Steam yesterday for $14.99. It quickly shot to the top of the digital retailer’s best-seller chart, where it remained for most of today. But almost immediately, a loud and angry contingency of gamers started drowning out its success with cries of false advertising and more.

And now Valve has removed The War Z from its Steam store.

So, what is the deal with The War Z? 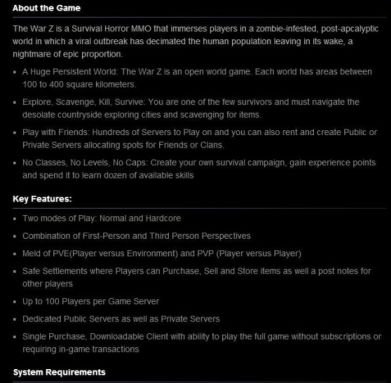 The majority of gamers that are upset with The War Z mostly take issue with a series of claims that Hammerpoint made on its Steam page about features that are no where to be found in the actual release.

The Steam page is landing where potential customers can get info about a title before they decide to spend money on it. The info on The War Z’s profile was misleading until the studio made some changes, although one of the misleading claims remained even after the update.

What were the false claims? Well, previously The War Z’s “About the Game” section on the Steam Store claimed the title features multiple maps between 100 square km and 400 square km, servers with up to 100 simultaneous players, rentable private servers, a friends list, and a skill-tree system.

Currently, The War Z only has the Colorado map which is reportedly only barely 100 square km. Hammerpoint capped all of the game’s servers at 50 players until earlier today.

The capability to rent servers, improve skills, and maintain a friends list are also all inaccessible. The War Z has placeholder buttons for these features, but they don’t exist in the game.

Hammerpoint has since updated the “About the Game” section to reflect that these features are coming in the future, although it still claimed that the live game featured 100-player servers when none were available.

“I’m not sure why this is even an issue,” The War Z executive producer Sergey Titov told Gamespy in an interview. “[The] text clearly states ‘up to 100 players.’ And 50 players — [which] we have right now — is what our players [and] our community feels is comfortable level for them to play.”

“I think there’s a difference between false claims and perception of the text,” he said.

Early this morning, Titov posted this explanation to The War Z forums:

As you all know we launched the game on Steam yesterday. Okay – we’re number-one top grossing game on Steam right now – thank you guys for your support.

At the same time it was clear that there were a number of customers that felt that information about the game was presented in a way that could have allowed for multiple interpretations.

We’ve taken steps to correct this and format information presented on our Steam Store page in a way so it provides more clear information about game features that are present in the Foundation Release and what to expect in the coming weeks.

We also want to extend our apologies to all players who misread infromation about game features.

At the end of the day our goal is to serve our players as best as we can, and we love when you guys steer us into the right way of doing it !

Thank you for playing The War Z!

So, it’s not their fault for presenting information that isn’t true. Instead, it’s the gamer’s fault for lacking the ability to correctly decipher the intent of the wording.

Gamers are not happy

Things turned pretty ugly, which is likely one of the biggest reasons Valve pulled the game. Angry customers filled forums like NeoGAF and community sites like Reddit with damning critiques of the zombie title. Many of these complaints focus on the false information, but a number of gamers are also livid at the Hammerpoint’s business model.

Despite costing $15 upfront, The War Z is brimming with in-game purchases. It’s a game about survival and scavenging for items, but you can spend real-world currency on ammo, food, and melee weapons. Players can then equip a purchased weapon to a character, and if that character dies, the item remains on that dead character until it respawns.

Right now, Hammerpoint has the respawn timer set to four hours. That means gamers have to wait for four hours before they can reuse the character with the purchased items … unless they pay up. A real-world-money payment will revive the character immediately.

This cool-down timer doesn’t benefit the gameplay in any way; it is an arbitrary mechanic the developer uses to squeeze some extra money from gamers. Of course, no one has to pay anything, but it’s a bummer to buy a game only to be met with a bunch of features that don’t work and a plethora of exploitative microtransactions.

Still, the anger at this game is greater than the sum of those issues, and it all stems from the belief many gamers hold: that The War Z is a shameless ripoff of DayZ. They both feature similar gameplay concepts and mechanics, and it’s easy to confuse the names, so gamers were already suspicious. Unfortunately for Hammerpoint, the developer only made it worse with these early issues.

Before the game disappeared from Steam, many angry players took to the Internet to make their displeasure heard.

They specifically targeted Titov. Many ganged up on his entry in the The War Z wiki, where they call him a liar and other four-letter words. An angry fan compiled conspiracy theories and a timeline of events in a YouTube video with over 170,000 views. Another gamer created the War Z Scam tumblr in which he collects every piece of damning evidence — verified or not — against The War Z and its developer.

Since gamers were purchasing The War Z through Steam, many took to the game’s forum on the digital-download service to complain, demand refunds, and warn others about its deceptive claims. But many posters complained about unfair bans.

The moderators of The War Z’s forum are deleting the posts, so it’s difficult to confirm exactly what these folk are saying and whether a ban is truly warranted, but Steam community administrator Al Farnsworth wrote that Valve is investigating the actions of the moderators and the developers in regard to the bans on the forum.

It seems they were doing more than that. By removing The War Z, Valve validates the furor over this game. Steam will refund players who believe they were deceived and work with Hammerpoint before allowing the game to reappear on the store.

At this point, Hammerpoint had a day on top of Steam and is left with a public-relations disaster. It will be interesting to see how the studio attempts to bring the game back to market.