Whatever device market share numbers are saying, the Apple’s iOS app store is still the king of mobile apps stores, by far. Apple had better not rest on its laurels, however: Google Play is growing twice as fast.

App analytics and market data company Distimo released its 2012 year-in-review report this morning, revealing that while Google Play is bringing in about $3.5 million daily in its 20 largest markets, the Apple app store is bringing in more than four times the revenue: over $15 million each and every day. And while Google Play is growing faster — 43 percent versus the iOS app store’s 21 percent — the growth in iOS revenue alone is greater than the total Google Play revenue.

And, it must be said, it’s much easier to grow at large multiples when you’re small.

For Google Play, the concentration is even more significant, with only 4 applications accounting for 10 percent of all Google Play revenues in November 2012. 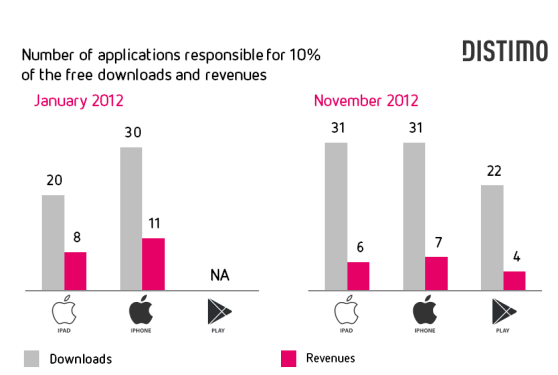 In 2012, the proportion of revenue that publishers achieved via in-app purchases moved from 53 percent in January to 69 percent in November — a 30 percent increase in less than a year. 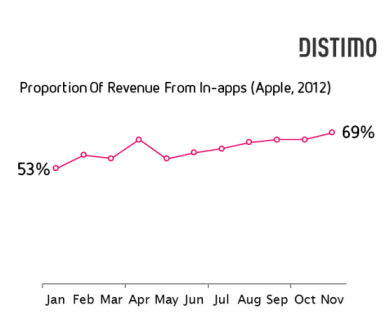 The top 10 grossing publishers across both app stores, all of which publish on both iOS and Android except for Apple and Supercell, are as follows. (They are ranked by revenue, and app numbers are approximate).

For more information, get the report, or check the key graphics here: