What messages do you want see in your Facebook Messages inbox? The social network hopes to answer, or at least better understand, that question with two releases: brand-new message filtering options for your inbox and a way to pay to ensure your messages are delivered to someone’s inbox.

Facebook announced Thursday that it was tweaking the Facebook Messages inbox experience to better ensure that relevant messages get to your inbox, as opposed to being dumped into the “Other” folder, which is Facebook’s equivalent of the spam folder.

The new inbox filters, which are rolling out globally, are Facebook’s way of correcting a broken system. The company currently routes messages to your inbox or other folder based on your settings, but it has found that it pushes too many “high signal” messages (read as: messages you probably want) to your Other folder, where they likely go unseen. To fix the problem, Facebook has created two filters, basic and strict, that will allow certain types of messages to reach your inbox that otherwise would not. 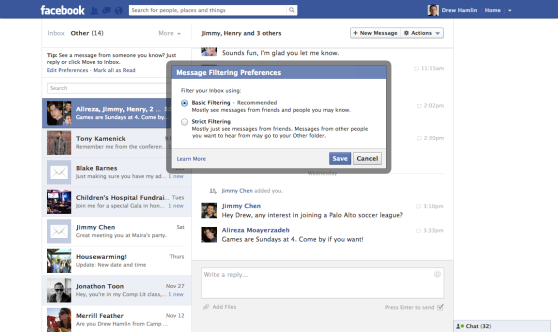 Both options, however, use the “mostly” terminology to allow for instances when Facebook puts its algorithmic magic to work and determines that a high signal message should get through. What’s a high signal message? One that comes from a Facebook Messenger for Android user who is not your friend but has your number, or an event invitation from someone you don’t know when the invite is going out to some of your mutual friends. Messages from a friend who emails your @facebook.com address will also get delivered.

There’s one additional high signal type of message that can get through to your inbox beginning today — but the signal in question is payment. Facebook is kicking off a small test in the U.S. that will let people you are not friends with pay a small fee to send messages directly to your inbox. The fee will vary, as it’s just a test, but prices start at $1 per message. The theory is that the fee will serve as a solid indicator that this message is important.

“The test is designed to address situations where neither social nor algorithmic signals are sufficient,” Facebook said in a blog post. “For example, if you want to send a message to someone you heard speak at an event but are not friends with, or if you want to message someone about a job opportunity, you can use this feature to reach their inbox.”

A Facebook spokesperson would not provide additional guidance on the pay-to-deliver test, other than to add that you’ll only be able to receive one paid-for message in your inbox each week.