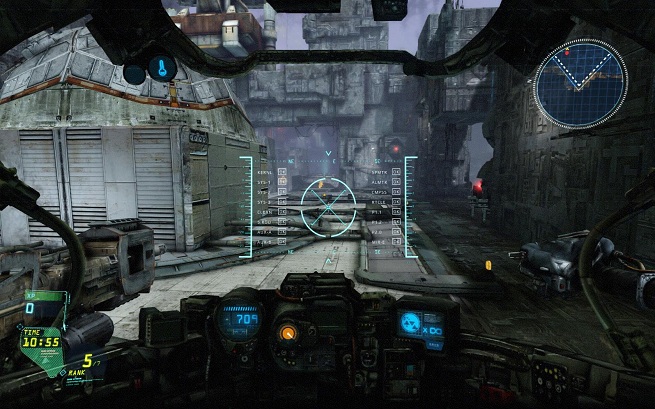 When I move forward, my mech subtly accelerates to top speed. Rotating has weight as this exoskeleton lags behind the shifting focus of my gaze. I can feel the thud of my footsteps. The fuel gauge drops when I hit the boosters, and these metal arms glow red as a hold down the trigger. In Hawken, the upcoming mech multiplayer shooter for PC from Adhesive Games (now in open beta), I am the physical embodiment of my virtual machine.

For like clockwork, I face off against other pilots encased in steel just as a robotic assembly line manufactures automobiles. My mech powers up, I point and shoot, and I survive and repair or break and collapse. Then I do it all over again. And again.

In the color-saturated junk cities that serve as our playgrounds of destruction, combat is a fierce, high-speed, and chaotic ride. Hawken does so by sticking with the standard control setup for first-person shooters instead of messing with throttles and accelerators and the torso twisting that characterize the MechWarrior series. In some ways, Hawken even feels like a claustrophobic Armored Core but not quite so fast-paced. My machine still has heft and moves like the multi-ton behemoth that I imagine it to be.

My starting mech, the Recruit Assault, comes equipped with a T.O.W. launcher and an assault rifle that I later upgrade to a submachine cannon. These weapons have personality: The T.O.W. is a sort of single-shot rocket-propelled grenade on a firing cooldown that prevents you from spamming; the assault rifle has longer effective range but grows wildly inaccurate with prolonged fire, encouraging short, controlled bursts; and the submachine cannon does a little less damage but makes up for it with a slower heat build-up — overheat, and your mech’s weapons go offline, leaving you temporarily unable to return fire.

With maneuvers like quick-dodge boosting and hover jets, the importance of spatial awareness is just as present as in the Armored Core games — if not more so because of the viewing perspective and maps dense with jutting metal surfaces. Even “bunny hopping” — ever present here as in any of your favorite multiplayer shooters with a jump button — becomes graceful and tactical in this environment. Mechs dance more than fight in Hawken, with opponents dodging left and right, boosting over obstacles, firing around corners, and nailing targets with leading shots. 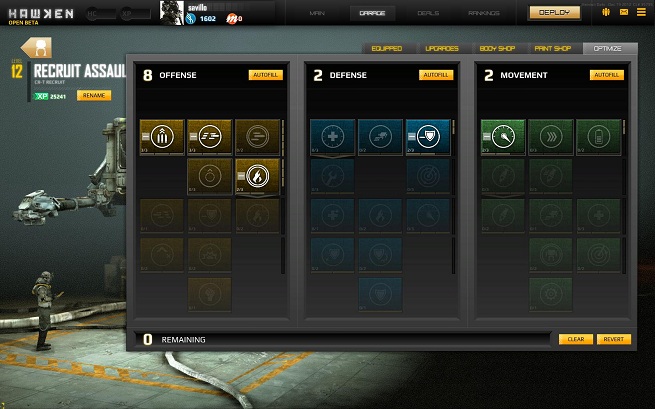 And in addition to the standard deathmatch, team deathmatch, and control-point (called Missile Assault) multiplayer modes, Hawken has Siege. Each side much collect “energy units” (EU) from stations scattered around the map. The first side to bring enough EU back will launch their battleship that then assaults the enemy’s base. The twist, though, is that anti-air batteries will activate. Whichever side secures these ground-to-air defensive structures controls the fate of the battleship. This gives the losing team one last chance to eke out a victory.

Playing matches of Hawken will earn you experience points toward the particular class used, which then levels up and acquires bonuses like optimization points or new gear. The former let you customize your ride in three categories: offense, defense, and movement. You can increase your damage output, speed up your repair times, or quicken your acceleration, for instance.

The neat thing is that once you earn points, you can swap them around for different bonuses as much as you want to adjust to your evolving playstyle.

As with any mech game worth playing, you’ll have numerous different parts — upper, middle, and lower chassis and strut arms — at your disposal. Unfortunately, Hawken has simplified this by only letting these serve as visual flair. And unfortunately again, you can’t earn them through regular play. You have to buy meteor credits using real dollars to make the robot death machine of your dreams. That’s a huge part of this type of game’s appeal locked behind a paywall.

Finally, you can change your primary weapon — but not your secondary — from within in a class-limited pool and other special items equipped to your mech. These include offensive, support, and countermeasure items (like turrets, shields, and extinguishers — used to cool an overheating machine — respectively) and internal components that add bonuses like additional armor or a faster earning rate for experience. 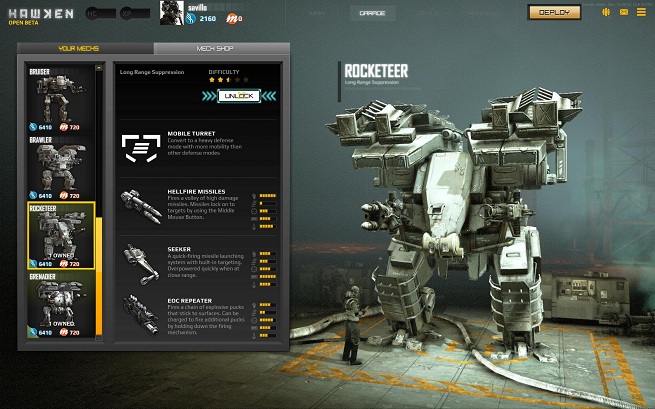 With everything that just feels so right about Hawken — including little visual details like a grainy video filter over the screen and the weighty feel of movement — one thing continually nags me as I play: Experience progression is a grind, and I can’t help but think that’s because Hawken is a free-to-play title.

Initially, XP points earn at a steady rate. The first several levels seem to fly by, and you’ll be unlocking optimization points and new gear with regularity. But as you close in on level 10 (out of a possible 25 for each individual mech class), things really begin to crawl.

In addition to earning experience points for each match, you also earn Hawken credits. You can use these to purchase new equipment and new mech classes in lieu of meteor credits, which cost actual money. But the rate in which you accumulate Hawken credits feels incredibly slow. I’ve been playing a few hours every day for the last week, and I’ve just reached a little over 2,100 Hawken credits. I need about 6,400 to unlock one of the other classes.

Adhesive does put up trial mechs. I’ve test piloted the Rocketeer, Scout, Sharpshooter, and Grenadier types. But you’re not given the option to customize the default loadouts until you unlock them through either Hawken or meteor credits.

Reinforcing this feeling is the option of buying two different booster packs, one for Hawken credits and one for experience points, that double the accumulation rate for a set number of days, depending on how many meteor credits that I’ve purchased with real money I want to spend. But do I really want to do that? Spending money just to save myself time feels like Adhesive’s needlessly added in contrived time constraints. That’s no fun.

Hawken releases in early 2013 for PC.