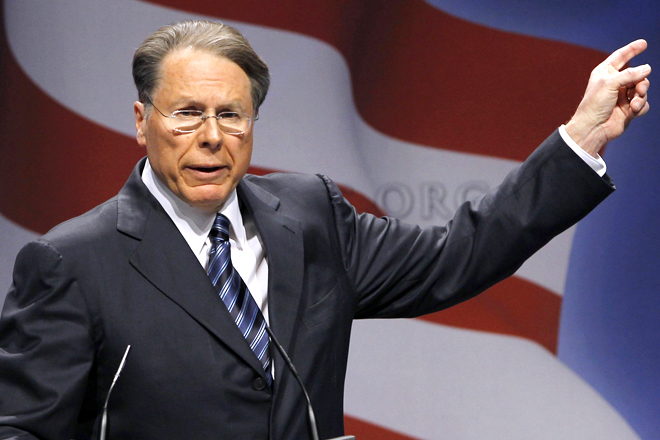 It’s been a week since the tragic mass murder at Sandy Hook elementary school in Newtown, Conn., and the United States’ most powerful pro-gun organization came out in defense of weapons and put the blame on video games and the media.

The National Rifle Association’s press conference, led by its chief executive officer Wayne LaPierre, confronted many of the claims people in and out of the media have made against assault weapons and other types of guns. LaPierre called this “dishonest thinking.”

“A child growing up in America witnesses 16,000 murders and 200,000 acts of violence by the time he or she reaches the ripe old age of 18,” said LaPierre. “And throughout it all, too many in our national media, their corporate owners, and their stockholders act as silent enablers, if not complicit co-conspirators. Rather than face their own moral failings, the media demonizes lawful gun owners.”

Said moral failings, in the eyes of the NRA, include the media covering up for what LaPierre called “a callous, corrupt — and corrupting — shadow industry that sells, and sows, violence against its own people.”

“Through vicious, violent video games with names like Bulletstorm, Grand Theft Auto, Mortal Kombat, and Splatterhouse,” said LaPierre, listing the games he believes leads to real-world violence. “And here’s one: it’s called Kindergarten Killers. It’s been online for 10 years. How come my research department could find it and all of yours either couldn’t or didn’t want anyone to know you had found it?”

What is Kindergarten Killer?

Kindergarten Killer is a 2002 web-based Flash game from indie developer Zsoa. It features a crudely drawn janitor shooting kids who are also armed and firing back at the player. It is a callous game, but it also doesn’t support the claim that the media is protecting violent titles so that the shareholders can rake in the money no matter the cost.

Kindergarten Killer is a free indie game. It’s not owned by any of the corporations that run national newspapers or one of the 24-hour cable channels. Likely, no one has even thought about this unfun Internet sideshow — including its developer —  for years.

Although, it is interesting to note that the kids in Kindergarten Killer are armed and are the only thing that can stop the player from killing more.

One of the NRA’s major points at the press conference is that by making schools “gun-free zones,” we’ve announced to would-be shooters that these are safe places for them to attack. Kindergarten Killer supports LaPierre’s argument that only a good person with a gun can stop a bad person with a gun.

The other four games are the products of major publishers. Oddly, two of the games (Mortal Kombat and Splatterhouse) don’t even feature guns — at least not prominently.

Yet the organization didn’t have anything to say about games that focus on real-world weapons like the best-selling Call of Duty: Black Ops II.

Again LaPierre stepped all over his own arguing points. He claims the media is ignoring the alleged violent effects these games have on people, but the media circled endlessly around both Mortal Kombat and Grand Theft Auto games in the past.

The “Controversy of Mortal Kombat” has its own article on Wikipedia. In the entry for Grant Theft Auto, each game in the series has its own separate controversy section. These were media-fueled drives to blame video games for all kinds of violent and anti-social behavior.

The NRA likely knows about those games and the media outrage they produced. That’s probably why they included them in the news conference. Gun advocates know that new antigun legislation is in the works, and the NRA is hoping to get the media riled up over gaming to draw the attention away from any proposed new laws.