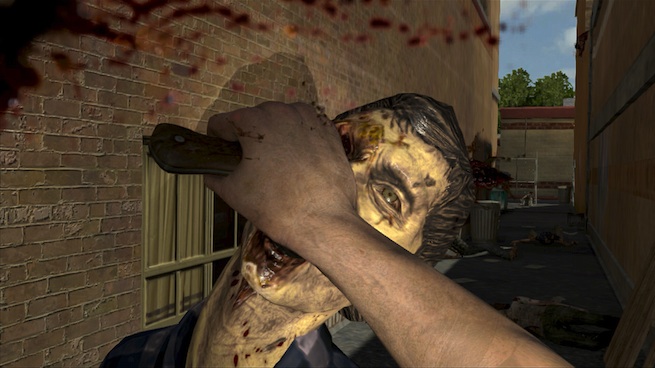 Daryl Dixon isn’t the most sympathetic guy you’ll ever meet. He’s got a short temper, is prone to violence, and doesn’t care much for other people besides himself and his racist older brother, Merle. Like it or not, these are the two main characters you’re stuck with in The Walking Dead: Survival Instinct.

Set for release sometime in 2013, Survival Instinct (for PlayStation 3, Xbox 360, and PC) is a first-person survival game that serves as a prequel to season one of The Walking Dead TV show on AMC, based on Robert Kirkman’s The Walking Dead comic books. Actors Michael Rooker (Merle) and Norman Reedus (Daryl) reprise their onscreen roles in a tale that follows the two brothers during the early days of the zombie outbreak in the state of Georgia. They travel across different towns and cities to scavenge for supplies while meeting other survivors along the way.

Developer Terminal Reality certainly has its hands full as it tries to maintain the franchise’s phenomenal success across comics, games, and television shows. The show’s viewership has steadily increased with the airing of each season, with 10.5 million people tuning in to the midseason finale a few weeks ago. And Telltale Games’ The Walking Dead — an episodic adventure series that branches off from the comics — is a hit for fans and critics alike, winning multiple “Game of the Year” awards, including our own.

“The first challenge of making the game is we didn’t want your standard first-person shooter because if you watch the show, even three walkers [what the characters call the undead] are dangerous,” Glenn Gamble, the principal effects artist and senior combat designer, told GamesBeat. “We didn’t want this typical running and gunning gameplay. We knew story was an important element. We want to flesh all that out.”

Terminal Reality is working with the AMC screenwriters to make sure that Survival Instinct “feels more like a story arc and less like an individual episode,” according to Gamble. For those who follow the show, this can have some very interesting implications when it comes to Daryl, who’s the only character you play. Fans know that the hotheaded Daryl from season one is vastly different from the cooler second-in-command Daryl we see in season three. Without offering anything too specific, Gamble said Terminal Reality is planting the “seeds” of that dramatic change with this prequel.

However, I didn’t find any hint of that during the hands-off 15 minute demo, which takes place about halfway through Survival Instinct. Daryl and Merle were looting supplies from a small town filled with walkers, and most of their dialogue consisted of ordering each other around or commenting on things they found. 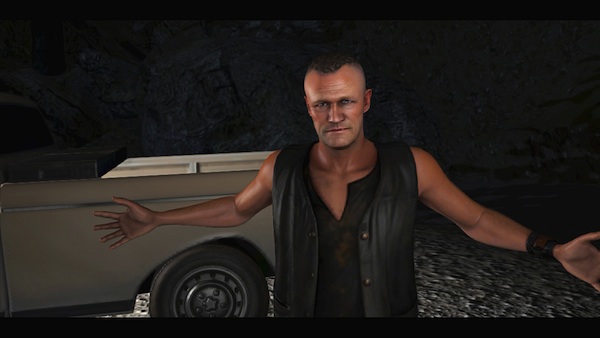 While you’ll find guns and ammo, you don’t want to use them unless you have to as the walkers will immediately head toward the source of the gunshot. Instead, you want to rely on melee combat to finish off the undead quietly. Gamble used an axe as his primary weapon to split heads and a knife for special execution attacks. He managed to sneak up behind a walker, shoving the sharp blade through its jaw and out one of its eyes.

In addition to seeing or hearing you, walkers can smell you if you stay in any one place for too long. It only takes a handful of hits for one of them to kill you and much less if a few of them decide to join the feast. And if they get close enough to grab a hold of you, you have a small window of opportunity to push them off and run.

Perhaps the most dangerous members of the undead are the ones off the screen. Lurking in alleyways or behind doors, these walkers take advantage of your blind spots by launching surprise attacks. “The idea is to never give the player a chance to get really safe and comfortable where they’re at,” said Gamble.

Daryl’s characteristic weapon — his crossbow — was conspicuously absent from the demo. Gamble laughed when I asked him about it, saying they have something special in store for Daryl’s “Excalibur moment” later in the story. 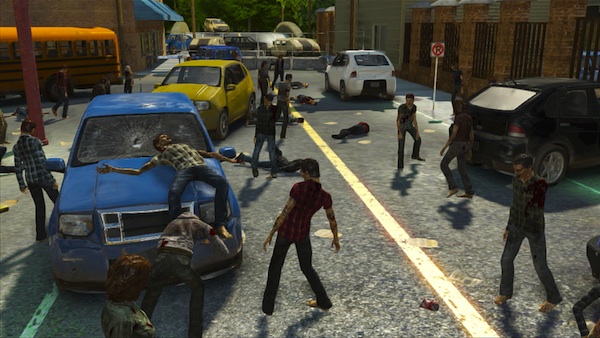 As Daryl and Merle drive through Georgia, they come across different survivors (new characters who aren’t on the show), and you can choose to add them to your group — more than a dozen possible candidates with their own stories, strengths, and weaknesses. But it’s impossible to recruit them all at the same time since you’re limited by the number of seats in your current vehicle. You can also dismiss them to make more room.

These extra hands are pivotal in helping you find supplies. You can order them to search the level for stuff you might need like ammo, food (a shared resource among all members), and gas. Even if you don’t decide to take these people with you, some of them can reappear in later missions and help you out when you need it, but this depends on how you treated them in your first encounter.

And with others, you might never see them at all during your initial playthrough. You’ll have a choice of which towns and locales to visit on your map, and these places may or may not have a survivor to recruit. Randomly generated side missions called “road events” further endanger your group as you travel, leaving you exposed in the middle of nowhere. Two examples Gamble gave involved visiting a gas station if you’re running low on fuel or running into a pile of cars that are blocking the highway. You either have to push some of the cars away or drive around them, which uses up more of your gas.

No matter who you decide to bring with you, it doesn’t sound like these optional characters will have a significant impact — whether they’re alive or dead — on the story. That makes sense as the first season of the TV show has both Daryl and Merle cast their luck with a different group of survivors — the same people who eventually find series protagonist Rick Grimes.