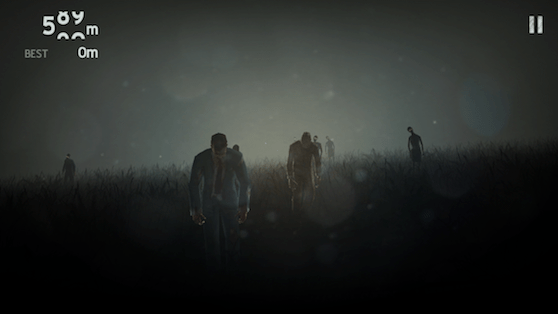 Those gifted with new mobile devices this holiday season have a world of fun awaiting their fingertips — maybe too much fun. Thousands of games have been made available over the years, especially since iOS and Android have increased in popularity, making the selection process frustrating for those navigating Google Play, the App Store, or the Amazon App Store for the first time. Well, consider this list of the best mobile games your saving grace. We’ve compiled a source for mobile gaming based on user friendliness, accessibility, and more importantly, fun factor. Whether you have an iPhone, iPad, Galaxy device, or Kindle Fire, these games are waiting for your attention. Think of this list as a beginner’s guide to gaming on your mobile device. 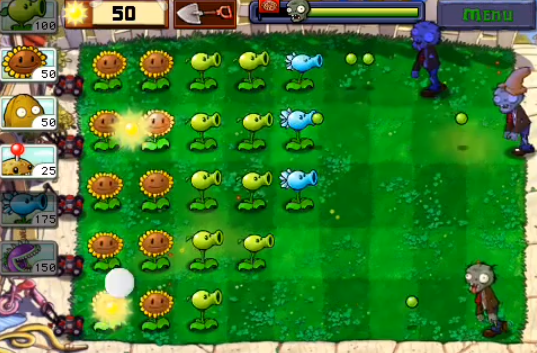 Plants vs. Zombies still stands as one of the more addictive games I’ve played. Ever. The object of PvZ is to protect your home from a hoard of zombies that hungrily make their way across your yard. All that stands in their way are plants curiously armed for your war against the living dead.

Specifically, the plants are equipped with a variety of weapons, such as projectile peas. Other plants eat zombies while cherry bombs blow them to deader than dead bits. The more plants you create, the better your chance at survival. You must position your plants strategically, or the game will end rather quickly. 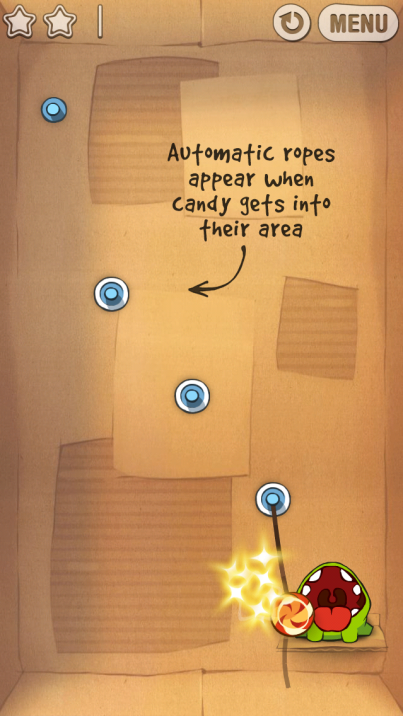 Cut the Rope is disgustingly cute. How so? A piece of candy hangs on a rope over an adorable little monster, and the player must swipe to break the candy free and drop it into the creature’s mouth. His smile is priceless. He’s a happy, goofy-looking little beast named Om Nom.

Cut the Rope’s puzzles are mostly based on physics and timing. For instance, the candy may be hanging from two or three ropes. The order in which you cut them becomes a strategic decision, and timing a cut perfectly so that the treat lands in Om Nom’s mouth can prove tricky. Some of the tougher parts incorporate elements such as hungry spiders that also want the treat, forcing the player to act quickly while still trying to carefully plan moves. More often than not, you’ll retry a level in the hope of feeding the little guy a candy so you don’t have to see his pouty face. It’s heartbreaking, and you can’t help but feel overwhelmed with guilt every time you fail. 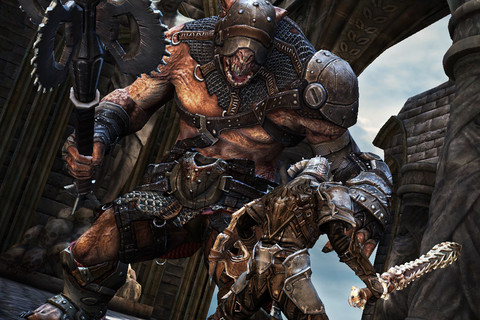 Infinity Blade is the first iOS game developed using Epic Games’ Unreal Engine, and it looks beautiful. It’s truly a showcase of what can be accomplished visually on a mobile device with the right resources, and it’s not far from what current consoles are capable of.

You walk through a castle fighting monsters using simple left, right, and swipe gestures to dodge, block, or attack your enemy. These controls work well with touch screens because they don’t rely on precision finger movements. Instead, the player must focus on timing and pattern recognition to win. It’s Punch-Out!! with shields, swords, ogres, and knights. 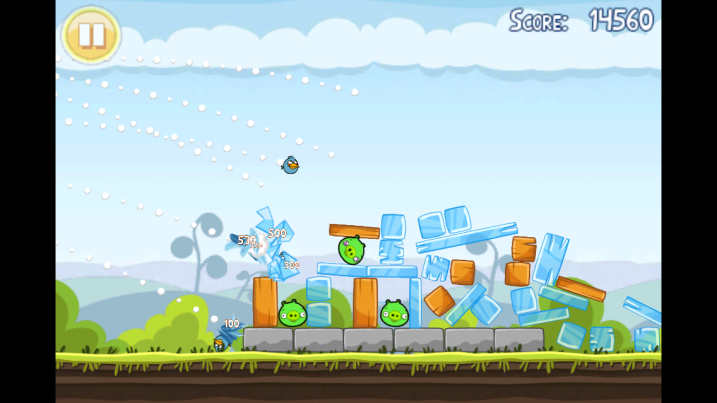 I admit that every time a new Angry Birds game hits the download market, I pretend I’m too cool to be interested. How many times can Rovio reskin the same game? Then I pick it up, and I’m hooked. Angry Birds is arguably the most popular mobile game around right now, and for good reason. It’s no wonder the developers keep releasing sequels and making Angry Birds available on every thinkable platform because even when you want to hate it, you have to admit it’s fun.

The object of the birds’ anger are evil green pigs that have stolen their eggs. The player’s job is to slingshot the birds into said pigs’ fortresses, rendering them dead and bacon. You have a limited number of birds per level, and you must find clever ways to efficiently eliminate all the pigs before advancing. The puzzles are physics-based, so players have to calculate distance and trajectory to win. You’ll often find that what was supposed to be a few minutes of playtime can become an hour or more of slaughtering hogs and cursing at the touch screen. 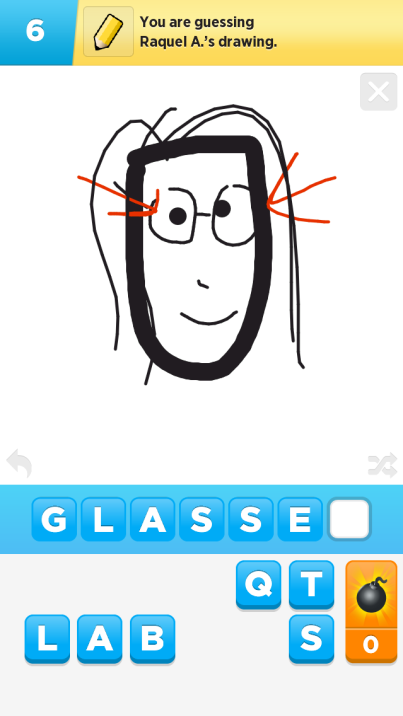 Draw Something was one of the first mobile games to bring a social element to the general public thanks to its Facebook integration. In fact, the social network is very likely the reason Draw Something became so huge. It’s easy to sign up for because most of us have a Facebook account. It’s also very accessible to nongamer types since drawing is a basic skill, which eliminates the need to learn complicated control schemes or rules to enjoy the game.

One player is given a word and must do his best to represent it in a drawing by using his device’s touch screen. Then, he sends it to the other person, who must guess the word based on his (usually horrible) illustration. You can be playing against several friends at once, and it’s not unusual to have 10 or more games going at any given time. Keep in mind that it may be hours or even days before a friend gets back to you with a reply. The only downside to any of these social games is that you are forced to rely on others if you want to play. Once the initial popularity dwindles, it’s a little harder to find opponents. 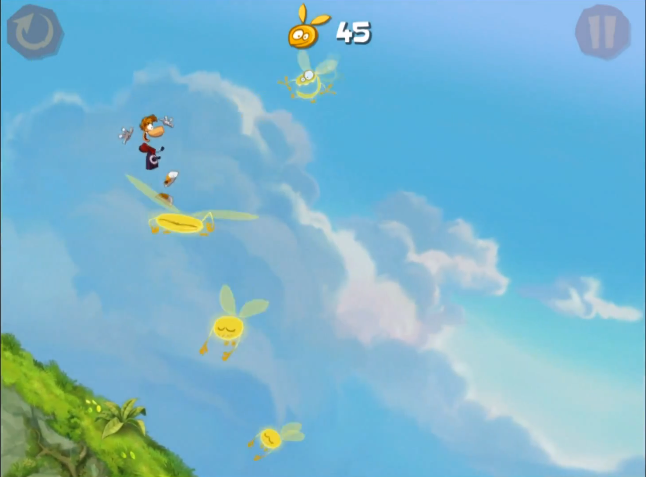 Ubisoft is one of those top-tier gaming companies that wasn’t afraid even early on to invest in development and publishing for mobile platforms. Rayman Jungle Run was picked by Apple as its best game of 2012. Luckily, Rayman is multiplatform, so Android users don’t have to sit this one out.

Rayman Jungle Run is what’s called an autorun game. The character — in this case, Rayman — continuously runs through the levels. The movement is out of your control. It’s the player’s job to jump, glide,, or attack at the right moment. This genre has grown in popularity on mobile devices because it brings elements of traditional run and jump games (often called platformers) yet keeps gameplay simple enough so that users aren’t annoyed by sloppy touch-screen controls.