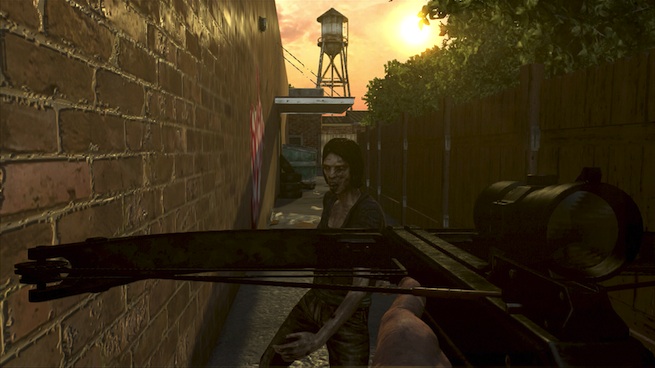 One is an episodic adventure game that earned our Game of the Year award. The other is a first-person survival shooter coming out in 2013 that’s based on the AMC television show. Both are a part of the growing multimedia empire of The Walking Dead, which began with Robert Kirkman’s long-running series of mature graphic novels set in a zombie apocalypse.

The world is big enough to handle Telltale Games’ The Walking Dead: The Game and Terminal Reality’s The Walking Dead: Survival Instinct, but will fans of the games/comic/show embrace them in the same way? And what makes them so different from each other? Here’s a quick look at what these zombie-killing tales have to offer.

Who you play as

The Walking Dead: Survival Instinct
You aim your crossbow and slice off heads with an axe as Daryl Dixon. In the current season of the TV show, he is an indispensable fighter in Rick Grime’s group of survivors, learning to put their needs above his own. Since Survival Instinct takes place before season one, however, the game shows us another version of Daryl as the reckless man who’d rather beat up someone he’s arguing with than talk it out.

His older brother Merle is partly to blame: He’s just as dangerous and as disgusting as a white trash stereotype. Developer Terminal Reality wouldn’t get into specifics about how it’s making Daryl a compelling character for the player to care about, but the show implies that Daryl really is a good guy who’s brought down by some bad people in his life.

The Walking Dead: The Game
Lee Everett is on his way to prison for murder when his police escort crashes into a walker, freeing the convict but sentencing him to a fate worse than anything the court system could come up with. The first survivor he encounters is Clementine, an orphaned little girl who shapes Lee’s (and the player’s) decisions throughout their adventure. Lee struggles to reconcile his past transgressions with this new world, and it’s up to you to either reveal or hide your crime from Clementine and the other people you meet. 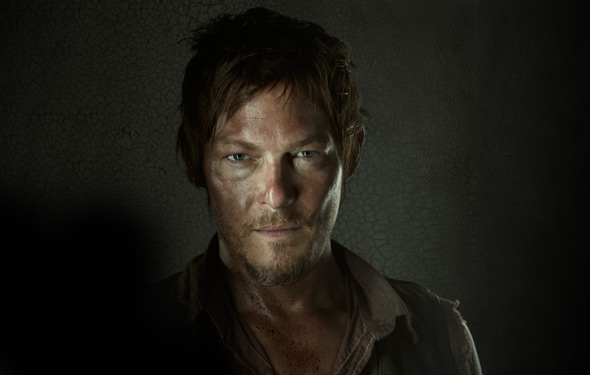 The Walking Dead: Survival Instinct
Don’t expect to blow through walkers like you do terrorists in Call of Duty. You should only use guns as a last resort since the loud noise just attracts more of the undead. Your best bet is to go in quietly with melee attacks, but that leaves you vulnerable for zombies to grab you. Terminal Reality’s record for the most zombie kills without dying is seven, according to the studio.

The Walking Dead: The Game
Traditional point-and-click mechanics, where you move a cursor around the screen to highlight objects to interact with, take up most of your time. The game strays from this formula in tense combat scenes, which require precision and timing: You hover the cursor over a specific point (usually the zombie’s head) before pressing another button to strike. If you react too slowly, you’ll die and repeat the segment.

Timed decision-making is also a crucial component. When characters speak to Lee, you can choose from four different responses, including the option to sit out and remain silent. These dialogue choices can affect plot points and how other characters think of you in later episodes.

Adherence to the source material

The Walking Dead: Survival Instinct
Terminal Reality is working closely with the AMC screenwriters to make Survival Instinct an accurate reflection of the tone and theme of the show, which is carving a path separate from the one written by Kirkman in the graphic novels. This leads to a realistic but stylized aesthetic, with the brutality and the gore kept intact. Actors Norman Reedus and Michael Rooker reprise their roles as Daryl and Merle, respectively.

The Walking Dead: The Game
Telltale worked with Kirkman on expanding the storyline in the comics, with mostly new locations and characters (except for brief cameos) not seen in previous issues. The Walking Dead: The Game has a cel-shaded look to honor its heritage though it ditches the uniform black and white drawings in favor of some color. It’s a striking combination that’s both beautiful and terrifying with its buckets of blood and chopped off limbs.

The Walking Dead: Survival Instinct
Daryl and Merle meet a variety of people as they trek across Georgia, and you can choose to take them along with you. You’re only limited by how many seats are in your car. Terminal Reality hasn’t shown what some of these folks look like yet, but it promises they have their own stories and personalities. Once they join you, you can send them out on fetch quests for ammo, fuel, or other supplies.

The Walking Dead: The Game
A huge part of Telltale’s choice-driven narrative is defining Lee’s relationship to the other survivors in his group. Each of these men, women, and children have distinct personalities, ideas, and motives, which often leads to conflict. As Lee, you can attempt to act neutral and try to compromise with everyone, but eventually characters will notice and pressure you to pick a side.

You also face some tough god-like decisions of who lives and who dies. Whoever comes out at the end of those harrowing situations will continue with you with his unique dialogue and perspective on what’s happening in the story. But as you play, you soon find out that one character’s safety is never a sure thing.

The Walking Dead: Survival Instinct
You have a choice of which towns you visit in Georgia, and some may contain survivors to recruit and missions to complete. Scenarios called Road Events randomly occur as you drive to and from these areas as well, leaving you exposed to even more walkers in the countryside or isolated locations. It’s currently unknown how much of an impact these choices and events will make on the overall storyline.

The Walking Dead: The Game
While the ending is more or less the same no matter what decisions you make, it’s the smaller details based on your choices that make your playthrough feel like your own personal journey with Lee and Clementine.

The Walking Dead: Survival Instinct
When GamesBeat spoke with Glenn Gamble, the principal effects artist and senior combat designer on Survival Instinct, one of the things he talked about was the technology behind the walkers and how Terminal Reality has a dizzying number of heads, clothing items, and body types to differentiate them. But don’t expect any pint-sized zombies in your crosshairs as Gamble said it was a “conscious decision” to not include children in the game.

The Walking Dead: The Game
Without giving away major spoilers, you do meet a few walkers that were once kids — these instances serve as pivotal emotional scenes for certain characters. Killing them is optional as you can delegate that grim task to another person in your group.