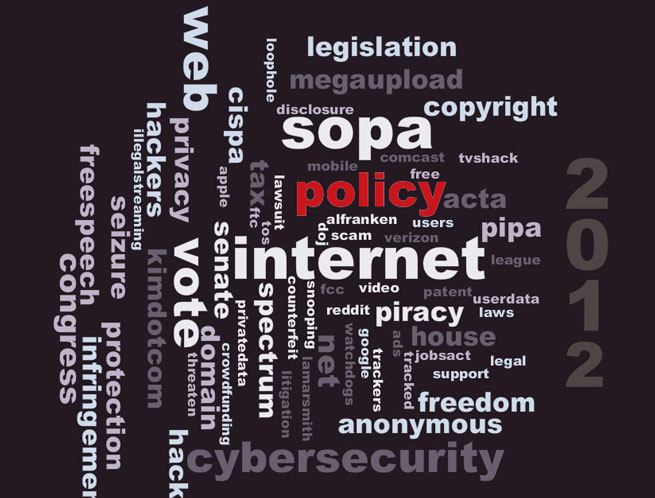 This year we woke up to the reality that much of U.S. tech policy is either deficient or horribly outdated.

But if 2012 has taught us anything, it’s that the average, often faceless Internet user’s voice can make a difference like never before. To be better prepared to make such a difference going forward, you’ll want know this year’s biggest tech policy issues. We’ve highlighted what we think are ten of the most important policy stories below; feel free to call out any we missed in the comment section.

The SOPA/PIPA legislation was the epitome of awful tech policy. It asked for sweeping authority to shut down any website domain suspected of copyright infringement or piracy. The legislation claimed to protect American businesses from theft. In reality, it would have allowed major media companies to censor anything they didn’t like. SOPA/PIPA was also so vague that it could have started a slow decay of our current privacy rights.

The story: “Following the news that the Senate is delaying a vote the Protect Intellectual Property Act (PIPA), House Judiciary Committee Chairman Lamar Smith (R-Texas) issued a statement today admitting that Congress may need to rethink its approach to thwarting piracy. Smith is the author of the House version of PIPA, the Stop Online Piracy Act. Last week, he announced that a vote on SOPA would be delayed until February, but the delay could actually end up being much longer — like forever.”

CISPA was yet another piece of legislation that could reasonably do more harm than good if not kept in check. The bill sought to give American companies more legal breathing room (protection against lawsuits) when collecting and sharing consumer/user data for the purpose of preventing massive Internet security threats. It passed a House vote with few guarantees that it wouldn’t grossly violate a person’s privacy rights (even in the face of a presidential veto threat). The White House eventually put a stamp of approval on the bill, pending certain amendments. But the Senate vote failed, and the president resorted to other methods.

The story: “President Obama signed a new cybersecurity directive in mid-October that begins to outline the government’s involvement in securing the private sector and how it will act when on the offensive. For the most part, the directive is still secretive and murky. A senior administrative official told the Washington Post that it will deal specifically with the issue of defensive measures or protecting the government and citizens from being hacked, and offensive measures, how the U.S. should act when pushing back.”

U.S. businesses are increasingly becoming both connected and mobile, which makes the need for additional wireless spectrum even more dire. You’d think that in this sort of climate that the government would be eager to bend over backward for any company willing to launch a wireless carrier startup to fulfill those needs. Well, you’d be wrong, at least in the case of LightSquared.

The story: “After spending the better part of 2011 fighting regulators, the wholesale wireless company LightSquared suffered a killer blow from the FCC today that could squash its 4G LTE network plans. We’ve been hearing from government regulators since June that Lightsquared’s proposed LTE network could interfere with GPS devices. Today the NTIA, an agency that oversees spectrum use, issued a letter to the FCC that claims Lightsquared’s network will indeed impact GPS services, and that ‘there is no practical way to mitigate the interference at this time.'”

The rise of crowdfunding platforms like Kickstarter and IndieGoGo is enabling a new wave of hungry entrepreneurs to disrupt the markets with business plans deemed too risky to gain investment by conventional means (venture capital, loans, angel funding, etc.). The JOBS (Jumpstart Our Business Startups) Act is a direct response to the crowdfunding movement and would permit startups to solicit the public for microinvestments, which process is currently illegal. Despite getting passed, the JOBS Act isn’t currently being implemented. It still needs the SEC to determine a finalized set of rules outlining how the JOBS Act will be enforced.

The story: “The JOBS Act that passed in the House today contains some big changes for crowdfunding startups. It now moves on to the Senate. Right now, it’s illegal for a startup to solicit investors on platforms like Twitter or Kickstarter. But the JOBS Act would change that. For startups raising $1 million or less, anyone can now buy up to $10,000 or 10 percent of the annual income (whichever is less) in equity.”

With the failed AT&T/T-Mobile merger still fresh in everyone’s mind, Verizon found itself running into constant road blocks when trying to buy a block of wireless spectrum from a joint venture made up of big cable TV companies. The deal would have allowed Verizon to buy the spectrum and begin selling  cable/broadband Internet packages from big cable companies (like Comcast) with its wireless service plans. (Verizon was also quietly trying to halt plans to grow its own cable TV/Internet business, FiOS.) U.S. regulators raised lots of red flags about how the spectrum sale could hinder competition, and attached all sorts of stipulations before giving the sale final approval.

The story: “Federal Communications Committee has approved a deal that will see Verizon purchase a portion of wireless spectrum from a handful of big cable television providers, the federal committee announced today. … Originally, the deal would have allowed Verizon to purchase the licenses for the spectrum for $3.6 billion and allow cable companies to run their own branded wireless services through Verizon as well as cross-promote their existing cable TV services within Verizon Wireless retail stores. After some push back from federal regulators as well as other wireless carriers, the Department of Justice approved the deal last week, provided certain stipulations were met.”

Google — best known for its search engine, advertising, and various web services — is working on a side project that will enable automobiles to drive without being under the constant control of a human being. As the company showed off the new technology in demo videos, it slowly started pushing state governments to pass new laws allowing cars to drive themselves.

The story: “California just added its name to the list of states allowing driverless cars to operate on public roads — and inadvertently made David Hasselhoff’s work on Knight Rider a bit more relevant to future generations. Governor Jerry Brown signed bill SB1298 into law today, thus adding automated vehicles to the state’s safety standards and permissions. This is, of course, wonderful news for tech giant and California native Google, which has been developing its own driverless car for the past few years. Brown even visited Google headquarters to sign the proper documents.” 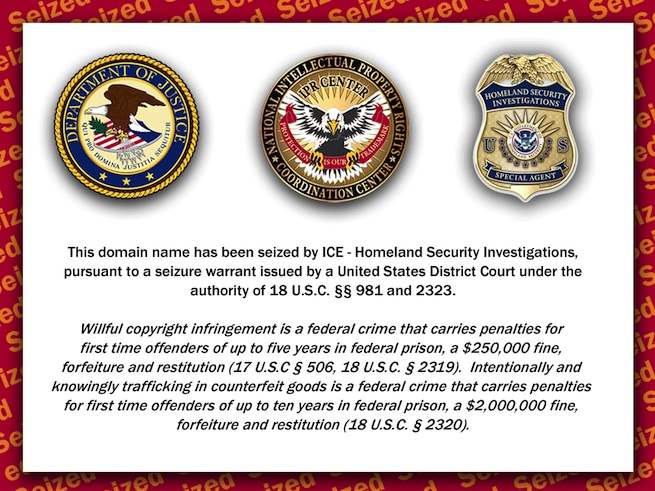 This year marked the continuation of U.S. authorities seizing domain names accused of conducting piracy and copyright infringement. The big problem with this was the operation’s questionable legality. Prosecuting the owners of these domains (as well as the websites those domains pointed to) became even foggier because many were operating outside the United States’ borders. February’s “Operation Fake Sweep” sparked an important discussion about domain regulation — a discussion that’s likely to continue in 2013.

The story: “The U.S. Department of Justice has issued a new round of domain seizures today targeted at websites that provide access to illegal live sports streaming video. The DOJ’s timing is likely related to this Sunday’s NFL Super Bowl championship football game, which has routinely become the most watched televised event of the year with over 100 million viewers. In December, television affiliate NBC and the NFL announced that the big game would stream for free online for the first time — meaning illegal sports streaming sites could hypothetically steal traffic away from NBC.”

It’s crazy to think that Netflix wasn’t allowed to integrate with Facebook in the U.S. when it was legal in so many other countries. But two years of lobbying efforts and judiciary hearing testimonies later, Netflix finally got Congress to explicitly state that it was OK to share a person’s video rental activity if they consented.

The story: “Soon, Netflix subscribers in the U.S. will be able to connect their accounts with their Facebook profiles thanks to new legislation that the Senate just passed. While the majority of digital media services have benefited from the social network giant, Netflix has previously been noticeably absent from Facebook’s Timeline feature due to a 1988 law that forbids video rental services from sharing a customer’s rental history. The current law, the Video Privacy Protection Act (VPPA), was initially created for the purpose of concealing physical media rentals, but until now, Congress hasn’t clarified whether digital video rentals also fall under the law’s jurisdiction.

Federal courts finally ruled on a two-year legal fight between Oracle and search giant Google. It’s seen as a particularly important case because it touches on whether companies can claim copyright infringement over a programming language.

The story: “Google scored a legal victory today, as a federal jury has decided that the search giant wasn’t guilty of patent infringement claims made by Oracle. The two companies have been wrapped up in a legal battle since August 2010, when Oracle accused Google’s mobile operating system Android of violating patents and copyrights related to Java that Oracle owns. The trial is seen as very important because it’d one of the most prominent battles over intellectual property in the software industry. In addition, it could set a precedent for whether or not a programming language can be copyrighted.”

I’d like to say that this particular legal fight over patent infringement by two major companies gave us some clarity on how to deal with future patent-related policy. Yet what the Apple v. Samsung case really did was expose how truly broken and inadequate our current patent system is. Sure, this is something most people already knew, but the Apple/Samsung case highlighted the ridiculousness of trying to apply our current policy. (Seriously, it even spawned its own meme based on the mom-like reprimands of the case’s federal judge, Lucy Koh.)

The story: “After just 21 hours of deliberation, the jury has reached a verdict in the Apple-Samsung patent trial, a landmark case that is set to change the way we look at competition in the mobile market. It’s a decisive win for Apple, with the jury awarding damages of $1,049,343,540 to Apple. … The jury found Samsung infringed many of Apple’s utility and design patents, particularly with regard to the nearly 20 phones that Apple had called into question. In addition, the jury found that in most cases, Samsung’s patent infringements were knowing and willful.”

The U.S. Supreme Court ruled that the health care reform law (Affordable Care Act, dubbed Obamacare) did not violate the Constitution. And while this particular law didn’t originate in 2012, it certainly made an impact on the tech sector of the health care industry in the form of electronic medical records, new regulations, and more. A vibrant crop of health care tech startups are already out there, and these will continue thriving now that the threat of a Obamacare repeal is gone. Bottom line: Health care tech will be huge in 2013.

The story: “For cloud technology companies that are brave enough to tackle the healthcare industry, it’s a perfect storm — there are major challenges and opportunities. … By 2014, Obamacare mandates that hospitals and practitioners who have been maintaining paper records to switch to electronic medical records.”