There’s no such thing as bad press. It’s a cliché, and — even worse than that — it’s not even true.

If you want evidence that the public spotlight is a bad thing on occasion, you should acquaint yourself with the story of Ocean Marketing. As our article points out, an angry customer asked someone mildly famous to publicize a few emails he exchanged with the owner of Ocean Marketing, and it destroyed the company. Or how about this advertisement Sony ran for the PlayStation Portable, where a white woman is holding a black woman by the throat with the caption, “White is coming”?

Yeah, that was ill-conceived.

Now that it’s the end of the year, we are gonna take a few minutes to reflect on the terrible examples of game-related advertising, marketing, and public relations in 2012.

Oh, Sony, you poor darling. You don’t know what is edgy, what is offensive, and what is just damned stupid.

Let’s recap: Sony — or its marketing partners — ran an ad in a French magazine that had a picture of a woman from the neck down with two large breasts on her chest and two more on her back. The caption on the ad, in French, reads, “Twice the touch screens, twice the sensation.” The idea is that since the PS Vita has a touch screen on the front and the back, it’s as much fun as a deformed lady with growths on her shoulder blades.

Let’s ignore that this offensively compares a woman’s body to a piece of consumer electronics. Let’s ignore the juvenile stance on the touching of boobies. Let’s ignore that touch screens actually aren’t nearly as fun as this comparison suggests. But I can’t ignore that this advert promotes the idea that a woman’s back is somehow boring because it lacks bosoms. I’ve been to France. The women in that country have just as nice backs as anywhere else. I would suggest that if you feel like a woman’s back is useless because it doesn’t have breasts, then you have a bigger problem than deciding whether or not to buy a new gaming device.

Publisher Square Enix started off the marketing campaign for its assassination title with a trailer showing the titular hitman punching a cadre of “naughty nuns” in the face. A loud chorus of confused fans wondered why the publisher would glorify sexualized violence. When I watch the video, the parts of my brain that react to “sexy nuns” and the parts that react to bloody noses don’t intermingle in the slightest, but I also wouldn’t use the punching of women in lingerie as a main selling point for a game.

Then, earlier this month, Square Enix unveiled a new marketing website for Hitman: Absolution that invited fans to put make-believe hits out on their friends on Facebook. The fake hitman would ask for a distinguishing feature of the “target” and would present the user with a drop-down menu that included things like “her hairy legs,” “her small tits,” and “his tiny penis.”

Since you could only send the messages to your confirmed friends on Facebook, this might not offend everybody. But the marketing team was obviously going for shock value, and it did shock people. Square Enix removed the website hours after introducing it.

“Have you heard about my Kickstarter?”

A big part of marketing involves PR people pitching products to the press. They try to get the media to cover the product in an attempt to create excitement. This means we get a lot of emails about boring stuff that no one wants to read about — and nothing epitomizes that kind of email like the “Hey, have you heard about our Kickstarter?” press release.

I am all for Kickstarter. I think it’s a viable alternative to the established publisher system, but it’s not good for Kickstarter when my main interaction with it is to groan while I archive an email that pretends like a developer asking for money is news.

Now, I wouldn’t include this on a list of terrible marketing ideas if the problem only affected my inbox. Internet forums like Reddit and NeoGAF have established rules against “Kickstarter reminder posts.” That’s because developers bombard everywhere they can think of when they have a campaign. It’s understandable to a degree. They’re trying to fund their work, but annoying people isn’t going to help.

The problem is that when Kickstarter first hit the big time, the concept itself was news. That’s not true anymore. Now, if developers want to grab attention for their crowd-funding campaigns, they need a deeper hook than the fact that they’re asking for money. 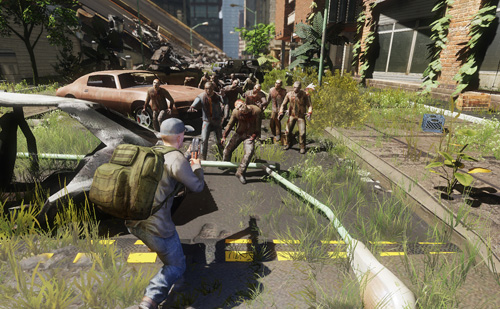 As much effort as publishers and developers put into marketing their games before they release them, it doesn’t matter if something goes wrong when the game launches.

Or in the case of developer Hammerpoint Interactive’s The War Z, if everything goes wrong when the game launches.

When the studio released the open-world zombie game on Valve’s Steam digital-distribution service, its store page noted a handful of features that simply weren’t in the game. When irate players began to demand refunds, Hammerpoint said it couldn’t do anything to help them.

This only enraged gamers further. Those customers raised hell until Valve could only respond by removing the game from its store and granting refunds to anyone who wanted them.

Now, the developer is deep in a public-relations hole that will be nearly impossible to climb out of when it’s time to rerelease the game.

Most in-game ads on mobile

I love not paying for games on my phone. It means I can try out a bunch of different titles without wasting my very limited funds, but I also understand that developers need to make money.

The most common monetization solution for mobile studios is to implement in-game advertising. Many developers have generated a great deal of revenue using these ads, so it works — but it’s usually done terribly from the player’s perspective.

Let’s take the very last game that I played on my phone before I got out of bed this morning: Family Feud.

I didn’t pay for the adaptation of the long-running television game show. In between each full play session, the game halts and throws up an empty screen while it loads an ad. When the ad finally appears, it is invariably oriented incorrectly. If I have the phone in landscape mode, the ad loads vertically, and vice versa. These commercials are also ugly as Web 1.0. The advertising people don’t put a lot of effort into designing ad spots for mobile devices. Instead, they just repurpose banners built for websites and slap those into places they don’t really belong.

You end up with an ugly and confusing mess that interrupts gameplay, and then, you’re lucky if the “skip ad” button works the first 20 times that you tap it.

No one has really figured out how to do in-games ad well. Some of the Angry Birds titles place a small ad unit over a portion of the screen during gameplay, which naturally leads to users inadvertently clicking the ad. That’s good for the developer, but it’s annoying for the gamer and costly to the advertiser.

Maybe this issue doesn’t have a neat solution, but it would be nice to see developers and advertisers working together a bit harder to improve the user experience.