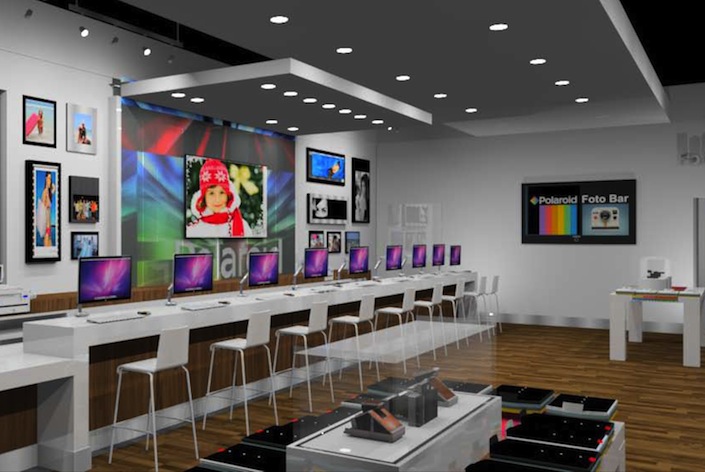 Polaroid is “liberating” your photos from the “confines of their digital devices” by opening 10 retail stores in 2013 called FotoBars, where you can edit and print your images.

It’s painful to hear an old photography company that is attempting to revitalize itself call photo printing stores “cool and hip,” but the premise actually sounds both cool and hip. You’ll be able to upload photos to Polaroid’s workstations, which from the image look to be Apple computers, from your smartphone, camera, or social networks. From there, you edit the photos and add filters if the photo doesn’t already come from Instagram. Once you’re done, you can choose a material to print on and a frame (if you want one), and Polaroid will ship you the image within in a few days.

The stores offer a few different options for materials to print on, including wood, bamboo, meta, acrylic, and canvas. Or, you know, you can just get a regularly printed photo. Polaroid says a “critical aspect of the customer experience” is being able to touch and play with examples of all of these materials.

If you’re stuck or want to learn something new, each shop will have “Phototenders” to help you through the process. Each also has “The Studio” where you can host parties or partake in a photo-editing class.

The first of these stores will appear in Delray Beach, Fla. and opens in February. Further stores will open around the U.S. through the year, including in New York, Las Vegas, and Boston.

Polaroid stresses that it wants these photos to finally be works of art, outside of your devices. Chief executive Scott W. Hardy said in a statement:

“Unfortunately, even the very best of those pictures rarely ever escape the camera phone with which they were taken to be put on display around our homes and offices. Why? Because turning those pictures into something tangible, creative, and permanent is neither easy nor fun. Polaroid Fotobar stores are going to change all of that.”

hat tip The Next Web; Fotobar image via Polaroid