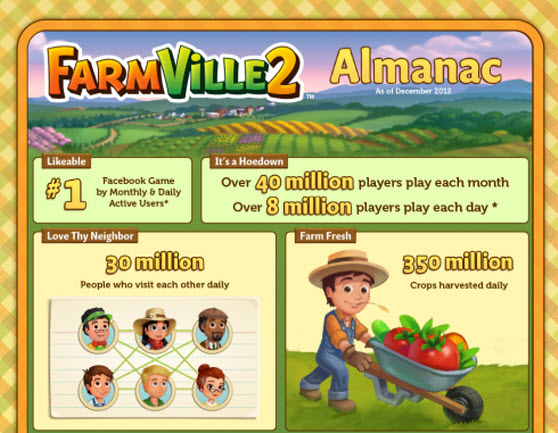 Struggling social-game giant Zynga has more than 42.4 million monthly active players for FarmVille 2, and that means it can dig out all sorts of interesting details about those people playing the online social game on Facebook and Zynga.com.

The surprising facts from Zynga’s findings include: 17 players are in the Vatican City. Maybe the Pope is playing? FarmVille 2 launched in September. While it isn’t as popular at this point in its life cycle as the original FarmVille was at its peak (around 83 million monthly active users), the numbers of people playing it is still impressive.

Zynga also says it has nine players in Tuvalu, a remote island nation with a population of 10,544. About players harvest 350 million crops every day and plant more than 8,000 every second. Enough virtual fertilizer has been produced to cover 24 million acres of farmland. Zynga says its Water.org charitable campaign in FarmVille 2 set a record for player donations from any Zynga game in 2012. My favorite stat: 17,876 people received a lifetime supply of clean water in real life, thanks to the donations.