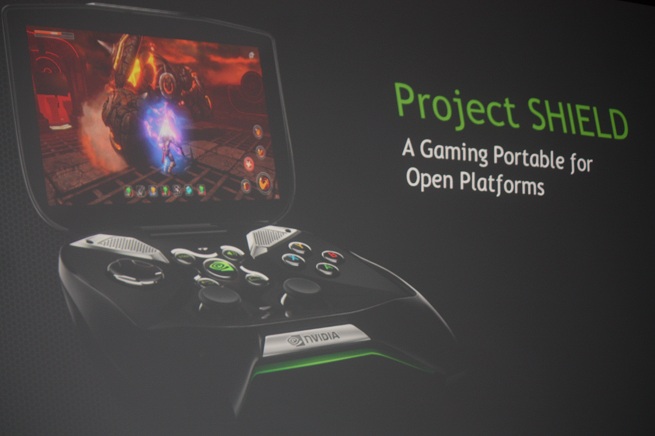 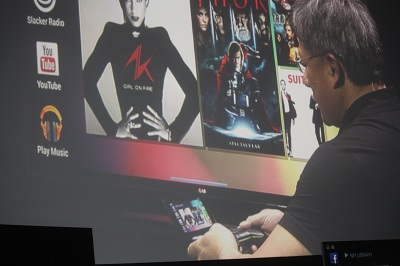 In an event at the Rain nightclub in the Palms hotel in Las Vegas on the eve of the Consumer Electronics Show, Huang showed it working with an LG TV with 4K Ultra HD resolution, or 4K by 2K, or four times as much detail as a 1080p HD TV.

Nvidia designed the entertainment device around its Tegra 4 processor, so that you can enjoy it either as a mobile gaming device or a living room game console.

Huang emphasized that one of the prime benefits of the Shield system is that it is open, accessing games on the Android store or the PC. The device has industry-standard input-output ports, including HDMI, micro-USB, and other slots. It also has a customizable tag.

“This is the first time you can see a 4K video coming off of a mobile device,” Huang said, as he played a video from the Android device on the big-screen TV. 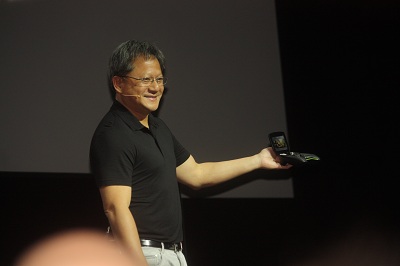 The console can play games on Nvidia’s TegraZone site for Android games. Even better, it can play a game that is stored on a PC. You can use the Project Shield game controller to play the game, which then can be streamed to your big-screen TV. Now that’s pretty cool.

“This is the culmination of five years of work,” Huang said. “You can enjoy it on the small display or enjoy the same game on your television.”

Huang showed demos of games such as the newest Need for Speed and Assassin’s Creed III, being played with the Shield controller via the PC, which streamed the game images to the TV.

“It allows us to enjoy any game on any device on any screen,” he said. “This is untethered gaming.”

After the press event was over, the party started. An Nvidia executive told me that the company itself will make and sell the Shield. It will probably launch the device in the second quarter, with pricing to be determined.

Check out some videos from the event below.

IMAG2658 from VentureBeat on Vimeo.

IMAG2657 from VentureBeat on Vimeo.