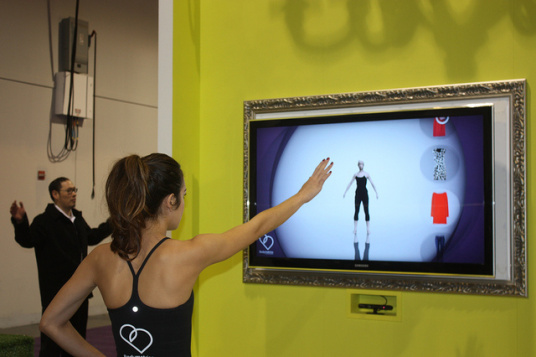 The largest U.S. tech trade shows gets underway this week in Las Vegas. The gadget heaven known as the Consumer Electronics Show is expected to draw more than 150,000 people to Sin City, starting with press previews today through Friday.

As we noted in our earlier preview, CES (officially called the International Consumer Electronics Show 2013) is a huge extravaganza that will feature the latest trendy products, from gesture-controlled TVs to health-tracking wristbands. VentureBeat writers Dean Takahashi, Devindra Hardawar, and Sean Ludwig will cover the show from beginning to end. (Catch Devindra’s preview here).

We like to go because it’s a bellwether for the tech economy and a place where companies have to appear if they want to be perceived as cool. The show floor will span 1.85 million square feet, up from a year ago. Last year’s attendance was a record 156,153, and this year the organizers expect about the same number. The exhibitors on the show floor will number at least 3,300, but that doesn’t include all of the companies showing off stuff in hotel suites.

Apple still doesn’t attend the show, but just about every other tech giant does. We hope to learn a lot about the state of innovation of the $1 trillion electronics industry.

Be prepared to share your breathing space with a lot of other people. On your crowded flights, try to travel light, but check in your baggage. Plan for huge cab lines during the show hours. Bring your comfortable shoes, use a backpack with wheels, and try not to stay out too late at the parties. If the parties are what you care about, check out the Karennet party list.

Cell phone reception is better than it used to be, but it’s still prone to interference. Text message is probably a decent way to communicate with coworkers. We always seek out the Wi-Fi havens in the press rooms or wherever we can find them. But carry a MiFi if you can; even hotel Internet connections are likely to be stressed to the limit.

Sunday: Lots of embargoed news will break Sunday through Tuesday as tech companies try to steal each other’s thunder and catch some early buzz. The event officially kicks off this afternoon with a press-only CES Unveiled reception, where scores of companies that have won innovation awards will be first to show off. The Consumer Electronic Association will offer product sales stats and forecasts for 2013. Toshiba has a press party, and Nvidia will have a late press conference at 8 pm.

Monday: Press Day at CES will have press conferences galore, starting with LG Electronics at 8 am through to Sony at 4:45 pm. The companies staging press conferences include Sharp, Panasonic, Voxx, Pioneer, Intel, Samsung, Fujifilm, Huawei, Cisco, Dish, and Advanced Micro Devices. We expect to hear a lot about tablets, smartphones, Smart TVs, Windows 8 computers, and 4K Ultra HD televisions (which have four times as many pixels as 1080p high-definition TVs). A bunch of startups will also show their wares at the Mandalay Bay.

Gary Shapiro, chief executive of the Consumer Electronics Association, will welcome the early crowd. Then, at 6:30 pm, Qualcomm chief executive Paul Jacobs will give the opening keynote speech in a sprawling ballroom at the Venetian Hotel. He replaces Microsoft’s Steve Ballmer, who gave up the coveted slot. Pepcom will close the day with one of many huge product showcases with its invite-only Digital Experience party at the MGM Grand. Celebrity alert: The Killers band will play at the invite-only AT&T Developers party.

Tuesday: The show floor formally opens in the Las Vegas Convention Center. My colleagues will walk the show floor, and I’ll be starting the first of many interviews and briefings. Panasonic executive Kazuhiro Tsuga will give a morning keynote. Verizon Wireless chief Lowell McAdam will give the afternoon keynote. We’ll catch a lot of news at the invite-only Showstoppers Party at the Wynn Hotel.

Wednesday: Samsung executive Stephen Woo will deliver the morning keynote. Monster Cable will throw a giant concert party at the Paris Hotel. In between these two events, there will be a whole lot of noise.

Thursday: I’ll finally get a breather from announcements and get my chance to walk the floor. I’ll attend the CES Game Summit for a short time and attend my last appointments.

Friday: If you hate crowds, this may be the day to show up. We’ll be gone by this point and will be contemplating our picks for the top CES trends, the best products and services, and awesome images from the show.