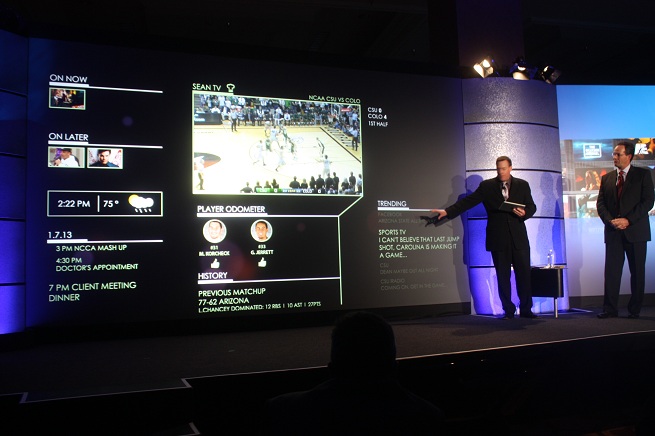 Cisco is the world’s networking giant, and today it showed what it is doing to make sure that it can provide the plumbing for the explosion of video on live TV, paid services, and the wide-open Internet.

For the consumer, this means that Cisco will make it easier to manage video content, regardless of where it is coming from. Cisco is creating apps that allow a user to search through videos in a visual way, organized based on the user’s own tastes. You can login and your own profile will come up. The user interface will show you the videos that are relevant to you. Cisco refers to its unified approaching to managing content as Videoscape Unity.

This may sound simple, but video comes in many different formats and resolutions. Getting the right content to the consumer isn’t easy. Video that works on a tablet won’t necessarily work on a big-screen TV. And Cisco is anticipating the camera-equipped tablets and smartphones will be huge sources of user-generated video in the future, and those video streams have to be integrated into its platform.

“The world of television is expanding way beyond the living room,” de Beer said.

Cisco’s customers, such as cable TV service providers, will implement the Videoscape Unity technology and modify it to match their own services. Representatives of Cox Communications, Liberty Global, BSkyB, Fox Broadcasting, and Major League Baseball said they needed this Cisco technology to be prepared for the future of video. These entities have to stream their video to consumers, regardless of what device they are using.

“There are a whole new set of challenges,” said Joe Inzerillo, the senior vice president at Major League Baseball.

Two years ago, Cisco announced its Videoscape strategy, aimed at transforming how consumers consume and experience television programming. TV is a $250 billion industry. To make it even bigger, Cisco has to make sure that the Internet doesn’t grow clogged. And it can do that by coming up with a proper balance of the cloud, intelligent networking, and local storage when it comes to moving video to the right place. That infrastructure has to be ready for an explosion of data that will come with 4K Ultra HD television, which delivers four times as much data as high-definition TV.

Last year, Cisco acquired NDS, a maker of video software and services technologies. That propelled the company’s progress on its strategy, which Cisco renamed today as Videoscape Unity. It is a way to manage all content, paid or free, that consumers enjoy today, said de Beer. The idea is to manage a consumer’s video in the home, whether that video comes from the Internet, the PC, or broadcast TV.

Cisco developed a “second screen” experience with NBC to call up contextual information on a mobile device during the broadcasts of the Olympics this summer. That was an example of Videoscape in action. Cisco says it is a principle built on open technology.

In the future, consumers may have a whole wall that is an immersive display, where many different images can be viewed at the same time. You’ll see social media feeds on the wall at the same time that you see all sorts of other data related to the video you’re watching. If it’s a sports game, you’ll see your friends talking trash about your team. The meta content and guide information will change, depending on which family member is watching TV.