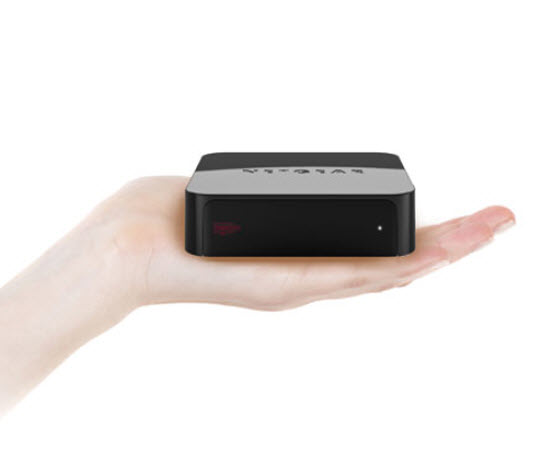 Netgear is one of those companies that likes to bring the wide-open Internet into your living room so you can watch any videos on your TV. That’s why it makes for a good partner with Google, which is invading the living room with its Google TV service. The two companies hope to disrupt other video players with the new NeoTV Prime with Google TV, a small box that is Netgear’s answer to Roku and Apple TV.

The Santa Clara, Calif.-based gadget company is unveiling the new product and a bunch of others at the Consumer Electronics Show in Las Vegas today. The devices are all built around the theme of making TVs smarter, more connected, and able to tap into the cloud.

The NeoTV Prime with Google TV (version GTV100) can stream content from a library of entertainment, such as movies, TV shows, and music, from streaming services such as Netflix, Amazon Instant Video, HBO Go, Crackle, Flixter, Rhapsody, Pandora, and others. If there’s a video service out there, Netgear is making it available on this box. On top of that, the Google TV service is making a large chunk of the Google Play store available on the TV. That means you can enjoy apps on your big screen. Google Play gives you access to movies and new releases in HD, music albums, and apps designed specifically for the TV.

Streaming media players are expected to become a $350 million market in 2013 and grow to $650 million by 2016, said Damir Skripic, the product line manager for connected entertainment at Netgear, in an interview with VentureBeat. Those players are being purchased by “quarterbacks,” or single males in their mid-30s who are big entertainment fans. These people are roughly 18 percent of the population but spend about 30 percent of the dollars in the market.

The device uses the third version of Google TV software, and it also has the Chrome web browser, so you can connect to the web and search for anything you want. And with it you can play content stored on your own external USB hard drives and home media servers. Using the aVia media player app, you can play, manage, and share content in your library. You can fetch videos, music, and photos from your digital storage and Google Android devices and view them on the TV.

It comes with a remote control that has two sides to it. The remote has a touchpad and directional pad on one side, and a full QWERTY keyboard on the other. That comes in handy when you’re doing searches. And you can watch video in a picture-in-picture feature while you’re web surfing.

The NeoTV Prime with Google TV is the high end of Netgear’s video box lineup, which also includes the NeoTV, NeoTV PRO, and NeoTV MAX streaming players. The Prime device learns what you like and organizes your collection based on that knowledge, so it’s easier to find things you want to watch or hear. A feature called Prime Time lets you discover shows across both Google TV and live TV without having to toggle back and forth between the two, as in the past versions of Google TV.

The NeoTV Prime with Google TV is now available in the U.S. for $130.

“Netgear has always been dedicated to helping you simply do more with your home network, and thanks to new mobile devices that work in the cloud, your connectivity options have expanded from fundamental to fantastic,” said Patrick Lo, the CEO of Netgear, in a statement. “This year at CES, we shine a spotlight on how we’re ensuring seamless connectivity and control of your home network. We want to help you make your house the smartest home in the neighborhood.”

Netgear also announced a bunch of new hubs and routers. Here’s some other announcements that Netgear made: