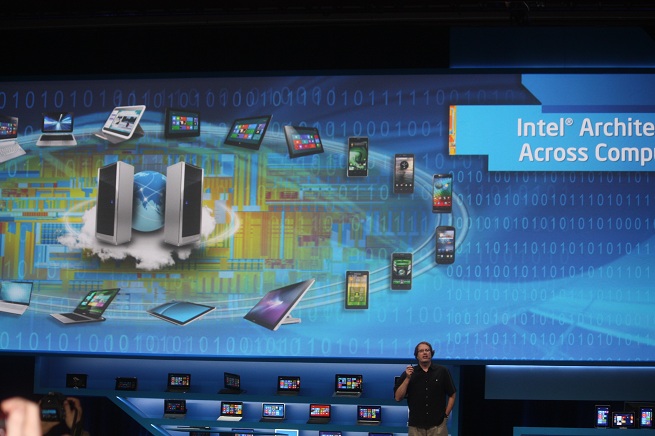 Intel announced a new smartphone platform that could get it into more emerging markets where cost is an issue. The code-named Lexington platform includes a Intel Atom Z2420 processor with an XMM 6265 companion modem chip.

Making progress in the mobile chip market is a strategic goal for Intel, which became the world’s largest chip maker on the strength of its business making chips for PCs.

In 2012, Intel launched chips inside smartphones from seven major companies, such as Google-Motorola and Lenovo. Those phones went to 25 countries, said Mike Bell, the vice president of the Mobile and Communications Group at Intel. To jump-start the market, Intel created reference designs for phones that its companies could adopt in order to get into the market more quickly. Bell made the announcement at Intel’s press event at the Consumer Electronics Show in Las Vegas today.

Bell showed off a reference design for the Lexington platform, which can handle full high-definition video encoding and decoding. It has good still image-capture capability. It has dual-SIM card capability for those who travel into different countries. It has FM radio, a MicroSD card slot for storage, and a wireless display technology transfer video from the phone to the big-screen TV.

“It’s really designed to be a no excuses, multipurpose phone,” he said. “It has no compromises.”

The first customers for the device include Acer, Lava and Safaricom.

Intel has 10 customers such as Acer and Fujitsu for its Clover Trail chips in tablet computers. The platform includes a dual-core, 1.8 GHz Atom Z2760 processor, delivering high-end performance with 10 hours of battery life, Bell said.

The next-generation Atom processor is code-named Bay Trail, with twice the performance of the current generation chip. It is a 22-nanometer, quad-core processor, and Bell showed it running in Pegatron and Wistron tablets with Windows 8. The device can also run Android. Those tablets are expected to come out in the holiday period of 2013.

“You see visions of things to come,” Bell said.