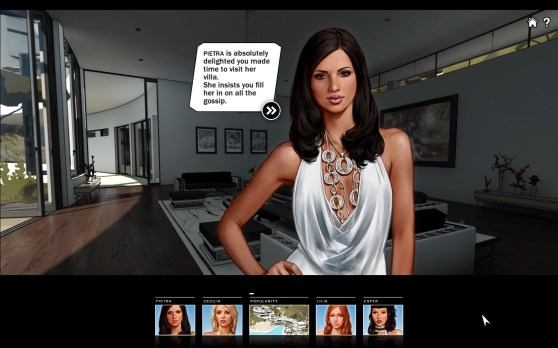 Let’s talk about sex. Specifically, sex in video games. It’s nothing new, and it certainly isn’t very avoidable, but games that make sexual conquest their primary goal are still very taboo. That’s precisely what happened to No Reply Studio’s first project, Seduce Me.

You might remember that name from late 2012, as it was one of the very first titles submitted to Steam’s indie game publication service Greenlight and subsequently the first rejected because of its subject matter. Seduce Me’s explicit sexual content is likely the reason Valve removed the title but I have a feeling the fact that it plays like a visual novel without a lot of text or context might also be a factor. Seduce Me is a game in theory but certainly not an enjoyable one in practice.

By pure chance, your voiceless (and initially faceless) character meets the fabulously wealthy Pietra during a photo shoot in your hometown. She then invites you to her lavish holiday home in Europe. Apparently, this isn’t just a casual visit but an invitation to one of her infamous sex parties.

You’ll combat pool boys and angry managers, and you’ll have to endure a lot of jealousy between a mother and daughter in your quest to fully seduce one of four lovely ladies at the party (Pietra included). The only problem is that you’ll do this not through conversation but by playing a series of increasingly tedious card games. If you win, you might just get lucky — or immediately play another round that nullifies any progress you just made.

The art style
Seduce Me is a very clean-looking game. Pietra’s holiday home is a shining white beacon built into a rocky Grecian beach and bears a remarkable resemblance to Tony Stark’s mansion in the live-action Iron Man films. The characters continue that gleaming, almost sterile theme that makes them feel artificial but approachable in a way.

No Reply selected a very realistic style for Seduce Me’s characters, which likely enhances their appeal when you finally get their clothes off. Oiled bodies glisten in the sun and full, pouting lips shimmer as characters pose in front of you.

Yes, the inevitable sex scenes are also very expertly rendered, leaving very little to the imagination. They’ll pop up without warning at times, so it’s better to play Seduce Me away from an audience, unless you want your coworker to see how far a scantily clad maid will go to please Pietra’s house guests. 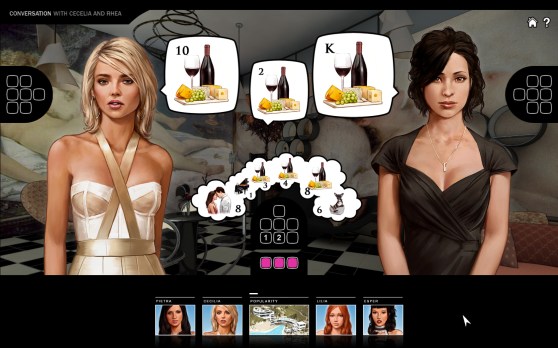 Gameplay
Interacting with people at Pietra’s party is perhaps the most annoying thing I’ve ever done in a video game, and this is coming from a person who enjoys continuously capping pens in the infamous Work Time Fun on the PlayStation Portable. I like repetitive tasks but only those I have control over.

When you strike up a conversation, whether flirty or confrontational, you communicate through various card games. Choices appear as thought and speech bubbles with images of champagne, gossiping, money, and Chihuahuas appearing in various suits like a deck of playing cards. In some games you’re racing to get the highest score; others require you to keep pace with your opponent. Most of the time, though, the decks feel stacked against you. Careful playing is often undone by a run of the worst cards for your predicament. I would chock this up to bad luck, but after continuously failing conversations because the computer threw out a card just low enough to screw me over, it started to feel like it was outright cheating.

Writing
Romance novels are not always written poorly. Many have very thoughtful, dynamic plots that just happen to wrap around the various characters frequently hooking up. Unfortunately, Seduce Me’s story is almost nonexistent outside of sexual confessions the player unlocks by interacting with people. You don’t get to know these women for their positive traits, as all the background characters are either annoyances, “bitches,” or completely vapid, and the four romanceable ladies don’t really seem desirable outside of their looks.

Your host, Pietra, is a very strong woman, but the game does its damnedest to present that trait as negative by repeatedly telling you how sexually out of control she is. According to one of the unlockable confession conversations, Pietra’s secretary ordered her to stop sleeping with the men she hired to clean her pool because they always get too possessive of her. Well, this is very dismissive of Pietra’s ability to act as an adult. Mostly, it promotes the idea that adults cannot act freely because they will always end up in bitter fights over who is sleeping with whom. 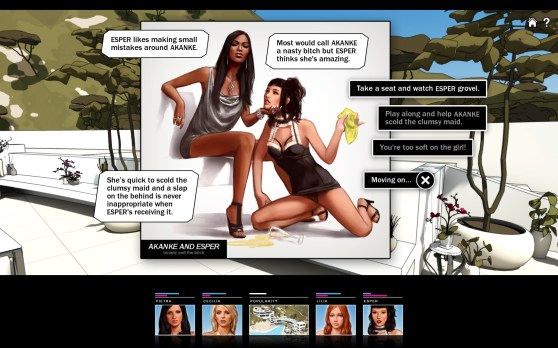 Technical issues
The most infuriating fact about Seduce Me is that I spent an hour trying to make the Mac version work. Beware; The Mac .dmg file does not have the correct permissions to run without you manually updating them from your computer’s terminal screen. After spending quite some time wrestling with the dark underbelly that is Apple’s Mountain Lion operating system, I switched to the PC version of the game instead.

But Seduce Me’s problems are deeper than that. While exploring Pietra’s mansion, you’ll often find yourself in group conversations. When these occur around the pool area, vital information about how many suits you need to win to progress stops appearing. You can still complete the match, but you have to guess what the win condition is.

Seduce Me isn’t fun, and it certainly doesn’t hold up against various visual novels focused on similar themes (like Real Kanojo and Sengoku Rance). Its most notable feature is that Valve removed it from Steam Greenlight. If that hadn’t happened, I wouldn’t have played this “game,” and you wouldn’t have to endure me hating it so much.

I hope that if No Reply tries its hand at a Seduce Me sequel that it drops the cards and focuses on character development. This first attempt is very pretty, but nothing about it inspires me to play longer than the time I spent working on this review.