Want to have your digital cake and eat it, too? Soon you’ll be able to, with new touchable technology that Tactus is showing at the Consumer Electronics Show in Las Vegas.

Tactus Technology is demonstrating a tablet with dynamic buttons that appear and disappear — or, rather, grow and shrink — as needed. The California-based company, which won a PC Magazine technical excellence award in December, calls the technology “morphing tactile surface”: real physical buttons that rise up from a screen when you’re typing and disappear when you’re simply watching.

“We’re planning to be in production by the end of this year,” Tactus chief executive Craig Ciesla told me. “We’re working with customers on an exact launch date.”

The company has its tactile screen running on an Android-based tablet right now, but it’s not tied to any particular operating system, Ciesla said. Rather, the company offers “a very simple API” that any mobile operating system can tied into and access the keyboard functionality.

A Tactus-enabled touchscreen device stores a small amount of fluid in a reservoir embedded in the phone or tablet. When the operating system invokes buttons, tiny amounts flow into specified areas on the screen, forming an QWERTY keyboard, a numeric keypad, or perhaps, a Buy Now button.

It’s a cool idea, especially if the reservoir doesn’t leak into the battery compartment, but you have to wonder if the company is too late to market. Most of us who carry smartphones around said goodbye to physical keyboards a long time ago, and manufacturers will be loath to add weight, girth, or cost to their devices. 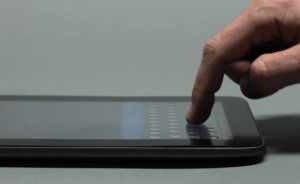 But Tactus says that its “dynamic Tactile Layer component is the same thickness as the layer it replaces and requires no change to the underlying display or touch sensor.” In addition, the size of screen, though currently demoed on a 7-inch tablet, is scalable all the way up to a TV screen, according to Tactus, and down to a standard smartphone size.

“The largest that we routinely make today is 14 inches,” Ciesla said. “But we’re able to make it much larger … there are no fundamental limits to its size.”

The technology has built-in capability for multiple arrays, so device manufacturers could enable dynamic switching between keyboard styles, and it has undergone a “fair number” of durability tests, passing so far with flying colors.

Almost everyone who’s serious about smartphones uses a full-screen touchscreen today, but touch-typing speeds are typically much slower on nonbutton devices — even if you’re a teenage national texting champion. So theoretically, this could help with speed and accuracy.

Not to mention familiarity for the almost half of Americans who haven’t yet upgraded to a smartphone.