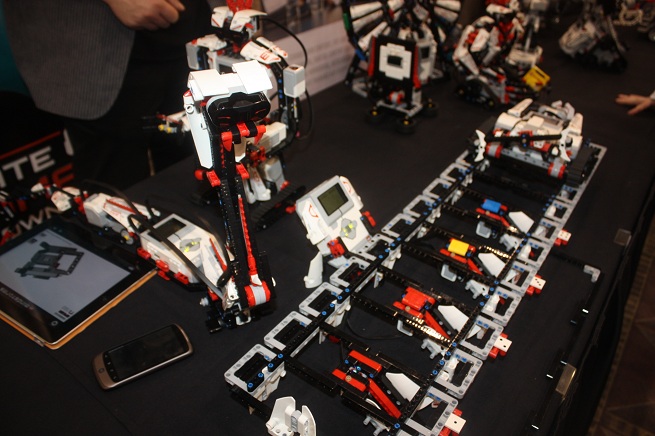 The Lego Mindstorms EV3 has an “intelligent brick” that you can use to program instructions for your robot. In the past, you had to program the robot on the computer. Once it was done, you had to download the program to the robot via a cable. Now the system can bypass the computer altogether.

After three years of development, Lego unveiled the new system at the Consumer Electronics Show in Las Vegas this week, and we saw it at the Digital Experience party at the MGM Grand. These new Mindstorms should be available in the second half of 2013 for $349. The platform now has native-language editions for Russia, China, Spain, Japan, Denmark, France, Germany, Holland, and Korea.

Lego first launched Mindstorms in 1998. It has redesigned it for an audience of children who have grown up with technology and are more proficient in commanding and controlling mobile devices. Today’s audience for consumer robotics is bigger than it used to be, but Lego wants to widen the market further by simplifying the experience for younger users. At the same time, the new devices will be more flexible and powerful for hobbyists and other enthusiasts.

We got a demo of the “Reptar,” a robotic snake (in middle left of picture) that slithers, shakes, and strikes. The Lego team also set up some simple missions for the robots to perform, such as detecting colors and firing little projectiles.

As the international team designed the system, 12 Lego fans from various nations (like Canada and Greece) tested the platform and offered advice. Lego is making a new version of the platform optimized for schools, since Mindstorms has become a huge phenomenon in educational competitions.

Check out the video below.