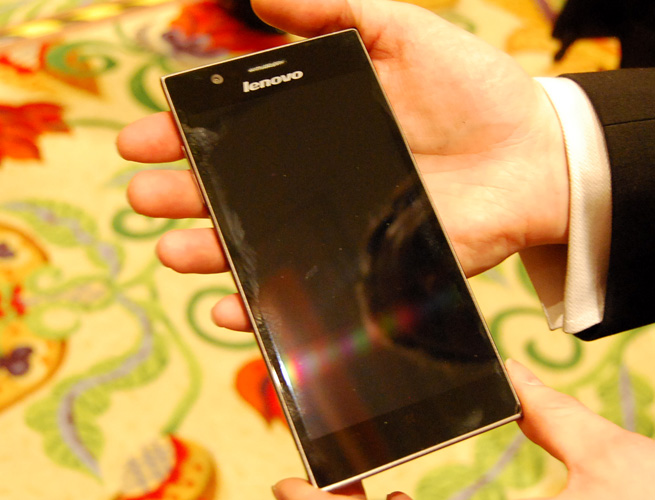 While Lenovo hasn’t released any of its Android-based smartphones in the U.S., it is the No. 2 smartphone player in China by market share after Samsung. If Lenovo sees a lot of success in the international market, it could eventually put out a smartphone in North America.

The phone has a massive 5.5-inch 1080p IPS screen, a 13-megapixel camera with dual flash, a 2-megapixel front-facing shooter, 2GB RAM, and 16GB of storage.

I held the phone this evening at a CES 2013 event, but I wasn’t able to try out the software, an indication the phone isn’t quite cooked and ready for consumption. Still, the device iswell-built and surprisingly light given the large display. (Although Huawei’s 6.1-inch monster phone is bigger.) The phone weighs just 5.7 ounces and measures 6.9mm thin. I put the K900 in my jacket pocket, and it wasn’t noticeable to me in the slightest.

Unfortunately, the IdeaPhone K900 is not scheduled for U.S. release, and when I asked a Lenovo representative if it could possibly reach the U.S., he said “probably not.” The phone will start selling in China in April, and it will later hit India, Indonesia, Vietnam, Russia, and the Philippines.

Check out more photos of the IdeaPhone K900 below.