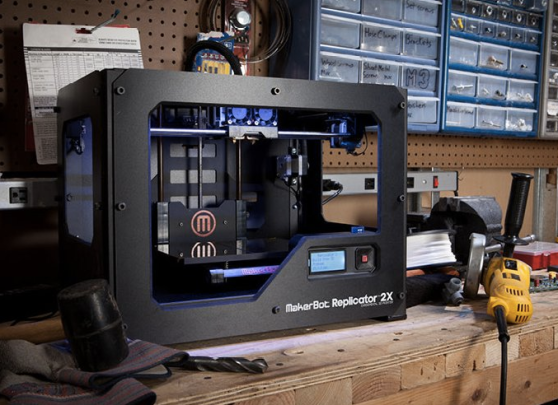 At CES this week, MakerBot is giving center stage to its Replicator 2X 3D printer.

Announced alongside the Replicator 2 last September, the Replicator X is a more experimental, more expensive device aimed at “prosumers” (as if 3D printers weren’t all “prosumer” devices by this point).

“If you’ve taken apart a flamethrower and put together a trebuchet, the MakerBot Replicator 2X Experimental 3D Printer is for you,” MakerBot says.

At the core of the Replicator 2X’s experimentation lies in its specialization with Acrylonitrile Butadiene Styrene (ABS), a thermoplastic that MakerBot rightfully calls “inconsistent.” To smooth things out, MakerBot has given the Replicator 2X both a heated platform and a heat-trapping enclosure, which together enable the device to create ABS-printed objects that don’t warp once they’re printed out.

The Replicator 2X’s other big feature is its dual extruder system, which allows the device to print in multiple colors. MakerBot says it’s tweaked the extruders so that they’re more reliable and require less maintenance.

Shipping in mid-March, the Replicator 2X costs $2,800, making it $600 more expensive than the less experimental Replicator 2.