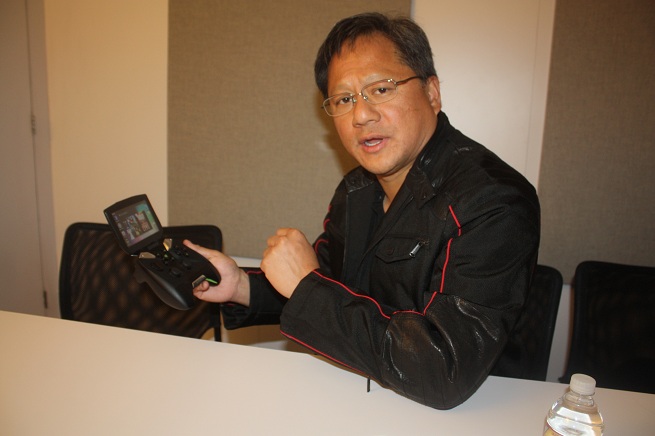 Jen-Hsun Huang has thought about making Project Shield, the portable Android gaming system that Nvidia unveiled this week at the Consumer Electronics Show, for the past seven years. But the chief executive of the world’s biggest graphics chip maker had to pull a lot of things together first before deciding to make it — like figuring out how to make a gaming console.

Nvidia designs chips such as the Tegra 4 inside the Project Shield, but it’s never gone directly into the consumer market with its own game system. (It did go out on its own into the retail market before with its 3DVision 3D glasses in the past). Nvidia has also worked to establish a cloud gaming network dubbed the Nvidia GeForce Gaming Grid, which provides the underlying foundation for delivering games to the Shield device, which includes a 5-inch screen atop a game controller. Then it designed a new kind of processing for its latest graphics chips. And in the past year, it put the finishing touches on its Tegra 4 mobile processor, which has four computing cores and 72 graphics cores.

It would be wrong to think that Shield is just another Android game controller. It has a whole ecosystem built around it and high-end components for hardcore gamers. In short, Project Shield is a massive effort that required the work of thousands of Nvidia employees. Now, it’s finally ready, and Huang showed Project Shield to us in an interview at the Nvidia booth at CES. (See our hands-on vide0). Here’s an edited transcript of our exclusive interview. 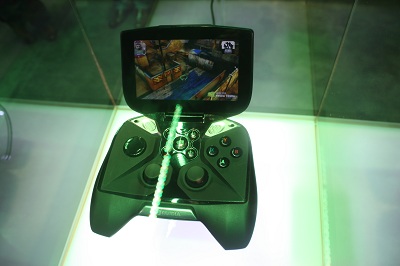 GamesBeat: How heavy is it? A pound or so?

Huang: Exactly. That’s ideal. We haven’t tuned any of the knobs on this, or the buttons, but ideally it should respond just like one. The moment you pick it up, you should recognize it as a controller.

There are two things that we wanted to do. We wanted to make sure that for anybody who picks it up, and in the moment that they do, they’re instantly familiar with it. All the controls are exactly where they expected. Secondly, because it’s pure Android, you know exactly how to use it. Because this is pure Android. If you’re an Android user — and this is targeting Android users — the moment that you turn it on, your whole life shows up. All your music is there. All your movies are there. All the Tegra Zone games you’ve already bought on your phone are there.

GamesBeat: What are some of the reactions you’ve heard so far?

Huang: I would say that the No. 1 reaction is, “Wow, it’s a lot smaller than I expected.”

GamesBeat: What design decisions can you talk about? You could probably have just had a tablet sitting on top of something that you could attach, taking the controller away. I think I’ve seen other designs like that out there already. Is there a reason not to do that?

Huang: First of all, a tablet is too heavy. It’s too top-heavy. Second, notice that this isn’t a tablet. It’s just a display. All of the electronics, the batteries, are in here. The balance of the system wants to be in your hand. Even a phone is too top-heavy. Worse, you don’t want to drain the battery life of your phone. Your phone is used for communication. The benefit of using Android is that all of the content on your tablet or your phone automatically shows up here. The instant familiarity of the system is a real plus. The connection to your open system, with all of your digital content, is a plus.

The design decisions started with this. It has to be a wonderful gaming device. The controller can’t be sacrificed. We started with the palms of your hands, how everything fit into your hand — the bumpers, the triggers, the buttons. They have to be in the appropriate places. Then we fit all of the technology around it. That’s No. 1. No. 2, it has to be as small as possible, to the point where the volume of this device is approximately a game controller. The reason for that is because if you’re willing to carry a game controller in your bag, then from a volume perspective, you want to carry this in your bag. The third thing, of course, is that the performance has to be amazing.

And then, the magic trick … as a device that is consistent with the way we expect to consume media in the future — wireless, cloud, streaming — those kinds of experiences have to be introduced. Streaming from your PC. We do streaming to your TV. In the future we’ll do streaming from Grid. Not only is this a wonderful game device, but it’s also gaming in a new way, the way that we expect to consume digital content. 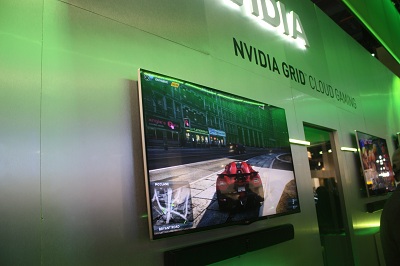 GamesBeat: Are you filtering Android content in some ways so that it works with this?

Huang: No, not at all. This is pure Android.

GamesBeat: Some of those games are designed more for touch, though, as opposed to buttons. How does that convert?

Huang: The way we’ll do it is this. Everything will work. But for games that are designed for controllers and also optimized for Shield, we have the Tegra Zone. All of your games in here just work. This is your Android experience. Everything is there. This is your gaming experience. Tegra Zone pops up. You’re playing your games. If, all of a sudden, you got a text and you want to check it out, and if you want to go back to that game, it’s exactly like Android. The behavior is exactly the same if you’re connected to the PC.

GamesBeat: How much of the hard work focuses not just on this but also in the whole ecosystem around it? Like, for a console maker, they have to go round up all the game publishers and game developers to get behind a console some months or years ahead of time.

Huang: We are perpetually doing that. You know that we work with game developers all over the world to enhance for GeForce or to optimize for Tegra. All of the optimizations that we made for Tegra are in Tegra Zone, and all of those games just showed up. For the last two years, all of the games that we’ve optimized for Tegra have already included controller support. We’ve been preparing for this day. All of those games, the 100 games or so, and the few hundred games in development right now, they’re all being optimized for this.

GamesBeat: How much of this resembles a console business and how much might be different or disruptive to it?

Huang: It’s completely different. That’s a really good question. We’re not trying to build a console. We’re trying to build an Android digital device, in the same way that Nexus 7 enjoys books and magazines and movies. This is an Android device for enjoying games. It’s part of your collection of Android devices. That’s how we think about this device. All of the economics associated with this device are exactly the same. We’re going to have to sell this device based on the value of this device, for people who are enjoying it and finding it useful.

The differences are this. The console, as you know, is proprietary, it’s closed, and it has a razor-and-blades business model. Our business model is open, it’s based on Android, it’s completely familiar to you, and the games range from free to free-to-play with virtual goods and also, of course, to premium games. This is the perfect platform for free-to-play. The free-to-play publisher wants to get their games on as many platforms as possible. Broad distribution is what they’re looking for. Broad distribution isn’t what the console guys are looking for. They’re looking for exclusivity. For us, this is just a fantastic thing we’re doing for that industry. That’s why free-to-play works great for PCs. Free-to-play is going to work great for Android, and if it works great for Android it’s going to work even better for Shield. 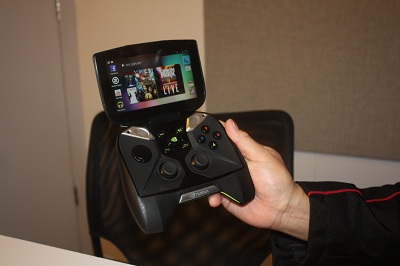 GamesBeat: What was going on in your heads during all of this time? People were saying that free-to-play was disrupting everything on Facebook, for instance, or iOS. They said that somebody had to bring this to the consoles and disrupt those $60-dollar console games, but nobody did it. Then things like Ouya started popping up. It seemed like it was taking startups to do something the established companies wouldn’t. You guys are an established company in different ways, partnering with some of those guys. What was your thinking when the opportunity for something like this came up?

Huang: If you talk to Julie at Ouya, she’ll tell you that her best partner in the world is Nvidia. We have hundreds of engineers working on her behalf to realize that game console. We love what they’re doing. But I frankly think that Ouya and that game console could be made by other companies aside from us. We can do it, but other companies can do it too. The reason why I built this device is because only we can build this device.

This device, Shield, has such incredible performance. It’s got the software stack that treats it like a server to stream to television. It treats it like a receiver for servers in the cloud and on your PC. The software that’s necessary to do that is so complicated. No company in the world is going to get it together. We’re going to have to do this. It’s the same technology that I was going to use for GRID anyway. The GRID technology goes into my PC. My PC now becomes a GRID server for this. I put that same technology in Shield. Now Shield becomes a GRID server for television. I’ve got all the technology that I can leverage. It’s very delicate and complicated technology, because it has to work, but it also has to work with very low latency.