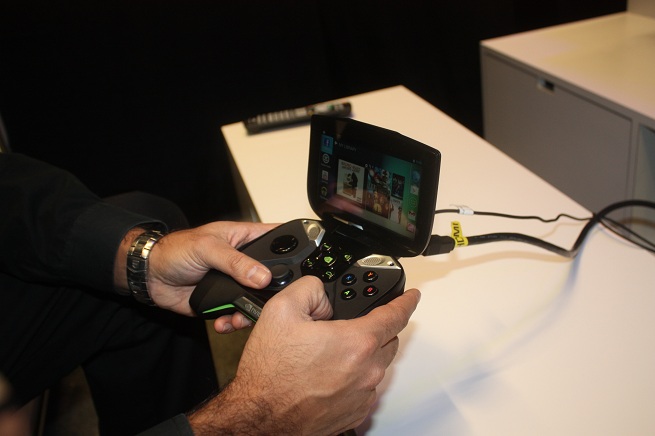 Nvidia’s Project Shield portable gaming system is one of the cool new technologies at the Consumer Electronics Show in Las Vegas. Nvidia chief executive Jen-Hsun Huang positioned the device as disruptive for the video game business because it makes free-to-play Android games available on both a handheld and on your TV.

Not many have had a peek at this Android-based device that combines a traditional Xbox-like game controller with a 5-inch display and Android games. The system can work as a handheld game player, or you can hook it up via a HDMI cable to your TV. Since the system has an Nvidia Tegra 4 processor in it, it can render the games so they look beautiful on a larger screen.

You can also play your games from the Steam network on your PC with Project Shield. That means you can use the controller to fire up a PC game on Steam, and then play that game on your TV or computer display. Both Steam and Project Shield are open, so it’s easy to do. Nvidia says the Project Shield should be out in the second quarter for an undisclosed price.

The device has industry-standard input-output ports, including HDMI, micro-USB, and other slots. It also has a customizable tag. The controller-display system weighs a little less than a pound. That is somewhat heavy, but it packs a lot of electronics in it. It feels good in your hands. And the weight is more in the base, which you can rest on your lap while you play. The display is light, since you don’t want it to tip over the system.

We got a good look at the system today at Nvidia’s booth, where we were briefed by Ujesh Desai of Nvidia for a demo of Project Shield. Check out our hands-on demo video below. Desai noted that the system is in prototype form still.