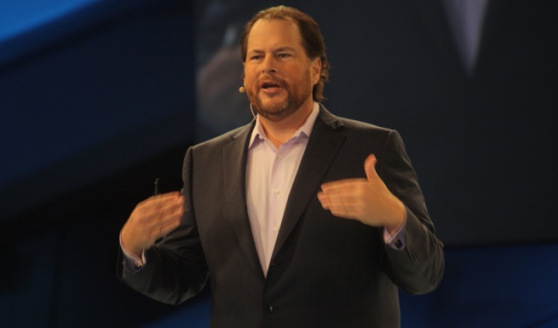 Bathed in the glow of neon light, Salesforce CEO Marc Benioff, a keynote speaker at the Consumer Electronics Show in Las Vegas, delivered some golden rules for technology entrepreneurs.

Above all, he said, follow the example of the “prophets” of the industry, like Mark Zuckerberg and the late Steve Jobs, and “be disruptive.” He said that tech is a “continuum” that is getting cheaper and easier to use every year, and that startups better keep up.

He revealed that he had not attended CES since the age of 17. But this year, he arrived early to spend time greeting entrepreneurs, and demoing products on the showroom floor.

Related: Check out our coverage of Benioff’s keynote at Dreamforce.

For Benioff, it’s not enough to show off your gadget at a conference like CES. “Almost all of these products will be in a big landfill somewhere,” he said. To avoid this fate, and build a successful business with staying power, he advised the following:

Benioff recently met with executives from Coca-Cola to discuss marketing plans for a machine that lets you mix together 100 flavors to create a unique blend. The touchscreen soda fountain is known as “Coca-Cola Freestyle.”

Benioff said he advised the team to incorporate social elements, Facebook, Twitter, and so on, and encourage fans to share their favorites. At CES, he used this example to show how “community is critical and seminal” for any modern company.

“It should be a circle of love with your vendor,” he said. Oh, dear.

Be transparent. Loyalty is everything

Benioff said Salesforce was able to convince companies to shift away from legacy systems, and embrace the cloud, by being transparent.

“If trust isn’t your No. 1 value as a brand as an individual in this economy — it’s over,” he said. If your product has limitations, be honest about it, rather than attempting to cover up flaws with marketing speak.

Stay ahead of the curve

Benioff said he was enamored with technology, as it’s always changing. “It’s a new world, and we have to move forward,” he said. On the show floor, he noticed that every gadget leveraged touch, and that we are firmly moving away from “our PC past”.

“Technology at its heart, at its core, is transformational. I get excited when I see the advancements,” he said.

Benioff kept his speech short and sweet — albeit a little cheesy — at this year’s CES. Check out our coverage of Microsoft Steve Ballmer’s appearance, which brought some legitimacy to Qualcomm CEO Paul Jacobs’ insane keynote.