SpaceX joined NASA today to talk about what it’s doing in 2013 to get humans in space with commercial space launches.

At a joint press conference with NASA and other commercial crew development (CCDev) participants today, current SpaceX employee and former NASA astronaut Garrett Reisman said, “We feel a sense of urgency to get Americans back into space on safe and reliable transportation on American-made rockets.”

NASA said it would be turning more and more low Earth orbit activities over to commercial entities. While the U.S. agency will continue to focus on deep-space exploration, NASA reps said the organization is increasingly comfortable about letting the private sector take responsibility for tasks that lie closer to home, such as International Space Station (ISS) deliveries of cargo and astronauts.

SpaceX, as you may recall, completed the first-ever commercial delivery of cargo to the ISS back in October. As Reisman said, “We already had a rocket-traveling back and forth to the space station. We took the approach, ‘What do we have to do to modify this to carry people?'”

Well, that vehicle design already had windows; that was one step down, about a million to go. In addition to providing ample proof of the company’s financial stability, SpaceX had to design a new launch abort system, life support systems, a new launch tower, ergonomic space suits, and a lot more to get ready for putting people in space. The startup even conducted crew trials on the new designs with NASA astronauts.

All that was 2012. In 2013, SpaceX aims to complete the design, test the hardware, ensure crew safety, and get ready for NASA certification. Here’s an abbreviated timeline and some interior and exterior images of the human-ready spacecraft: 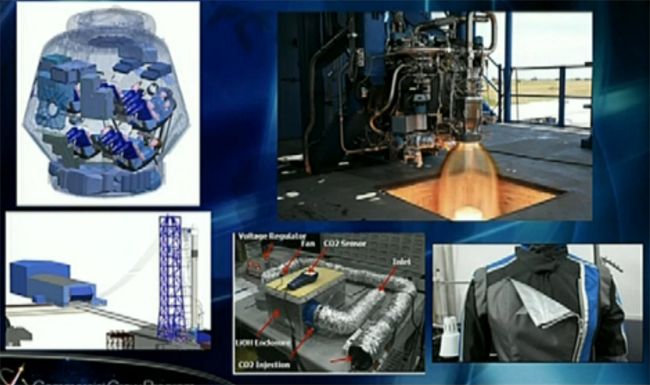 By December, SpaceX should be ready for its first actual tests of the new systems, starting with the launch pad abort test. “This is not a simulation … we’re going to take a Dragon as flight-like as possible from our pad over at CCAS and demonstrate our capability to get away from the Falcon 9 on the pad from 0 altitude and 0 air speed if we were having a bad day on the pad.”

By 2014, Reisman said, SpaceX will be doing preliminary structure qualifications for the Dragon spacecraft, conducting an integrated critical design review, and finally — the main event — its in-flight abort test in April 2014.