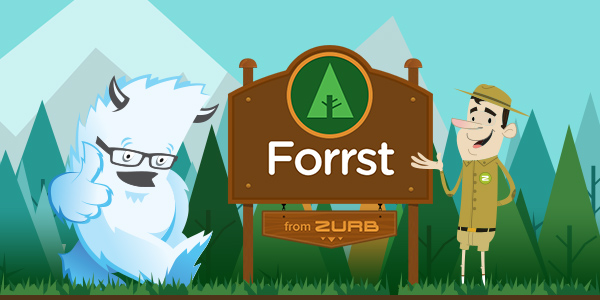 Once upon a time, a hacker built a product. Then he sold it to a company that treated it poorly. Now, another company bought it back and promises to treat it right.

The product, Forrst, is a small but fascinating community of designers and developers. Its members post bits of UI and code in a simple, social interface, filling a set of needs somewhere between communal problem-solving and social narcissism. And last year, design site Colourlovers acquired it; Colourlovers also has tools for designers to post bits of their work.

It was a wonderful exit for a passion project from an all-around excellent hacker, one Kyle Bragger — or so we thought. Less than a full year after the acquisition, Forrst has been handed off to a third owner, Zurb.

Zurb is a web shop, plain and simple. You can think of it as a stable of top-shelf product people who come in and help you overhaul your website or mobile app or whatever.

So, what would a product shop want with a design/developer community? And why did the seemingly perfect marriage between Colourlovers and Forrst lead to such a speedy breakup?

First, we talked with Zurb. While the Zurbites didn’t want to discuss why the Colourlovers deal went sour, a company rep did tell VentureBeat via email, “We plan on keeping Forrst on http://www.forrst.com. The community and product will actively be maintained.

“In its current state, we don’t find the interface very compelling. We were intrigued by the existing community of designers/developers on the site, and the opportunity to evolve the interface into something great.”

For starters, that means improving the feedback loops built into the service, increasing opportunities for collaboration, and cranking out a mobile web app as soon as possible, Zurb stated in its official announcement of the acquisition.

Currently, the site has more than 50,000 accounts; no one will say how many of those accounts are active (Forrst was founded in 2009 and saw a lot of media/hacker love in 2010; traffic of late has been declining, according to various analytics tools).

Next, we talked to Bragger. The young builder-of-Internet-things went over to Colourlovers during last year’s acquisition. At the time, he told us that while it was weird to have to answer to a “boss” after working as an entrepreneur, he was excited about the deal and happy with the Colourlovers team.

But in another email today, he told us he’s much happier to be back on his own, working on a new product (more on that in a moment).

“I was definitely in a rut for a while there,” said Bragger. “I think Zurb will be a good home for Forrst. Hopefully, this time around it gets the attention it deserves.”

Forrst under Colourlovers had two updates in the 10 months it lived under the same roof, metaphorically speaking. First, there were some tweaks to the sharing of code and design snippets. Second, it enabled private member-to-member messaging. But any grand goals the Forrst Rangers had about growing their community or ramping up revenue were decidedly not realized in the new regime.

We do know that Colourlovers was the one to call it quits; the company approached Zurb (and possibly others) about buying Forrst. What we don’t know is why, exactly.

We’ve reached out to Colourlovers and will update this post when we hear back from that company. In the meantime, we can only look forward — forward to Forrst’s future at a shop that seems to see its potential, and forward to Bragger’s next release.

Bragger, who is now part of product-hacker collective Elepath, is working on Sets, a lightweight tool for making lists (or, if you will, sets) of links. It has the soul of Pinterest without all the thumbnails — a design element Bragger said he finds distracting. And it’s already gotten a Hacker News thumbs-up from Delicious creator Joshua Schachter.

“Sets is my take on what a curated bookmarking service should look be,” he said. “I used to be a pretty avid Pinboard user, but I started realizing that my own usage of the service was very much write-only; I’d drop links in and literally never read them again.” He said he had approximately the same relationship with Twitter: no consumption, write-only.

“Anyhow, I realized that there’s an interesting continuum that exists, where on one hand you have pure utility services, like Pinboard, and on the other hand, you have very social/broadcast stuff, like Twitter. Sets aims to exist in the middle — it’s useful to me as a way to track interesting URLs, but it also works well in helping me to share those with others who may find them of value.”

Sets is currently in an invite-only beta, but you can register your username now and wait for updates as they roll out. Bragger is currently putting the 1.0 spit-and-polish on the product, which he said won’t see any drastic changes between now and its public launch.

Bragger’s experience with building Forrst, selling it to a company that might have wanted to shutter it, and then watching it escape to what is hopefully a better home has been difficult. We asked him if he’d ever sell Sets or another product to another company.

“No, I can’t say that I would, at least at this juncture,” he replied.

And don’t expect to see him as part of an acqui-hiring deal anytime soon, either. “I’ve worked my ass off to hone my skills as a creator, and I’m very confident in own abilities, so that makes it easier to accept the risk that comes with working in early-stage companies,” he said.

“Having the creative freedom to work to my full potential is the only way I’ve ever felt truly fulfilled. I don’t feel like I have a ‘job,’ and I’d hate to look back on my career and wish I’d taken more risks.”