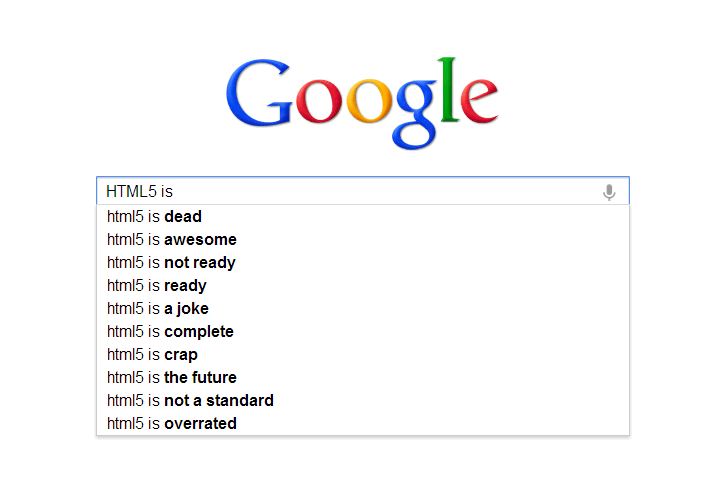 If you’re looking for controversy, try typing “HTML5 is” into your browser and spend an hour reading through the various pros and cons of the web’s latest update. Some claim that HTML5 levels the playing fields, while others call it a premature technology with no near-term place in technology’s value chain.

Between my roles at AppMobi and now Ludei, I’ve heard every argument — and most of the criticisms are true.

The question is: Is HTML5 the right tool for the job? If you try to pound a nail into a wall with a banana, you’re gonna have problems. Bring a knife to gun fight? You get the idea.

The truth is that I believe HTML5 is ready for game development, and I promise to show you how.

HTML5 is awesome — no one should deny this. Many of its new capabilities are game-changing, but when it comes to using HTML5 for mobile gaming, some elements are clearly missing or busted. Audio is basically broken. Complex animations render slowly in mobile browsers. Many of the features of that would make HTML5 well suited for gaming have been left out, like support for vibration or gyroscope. And let’s face it, we all compared games on the mobile web to titles available on the Apple App Store and Google’s Play market. And the comparison is rarely pretty.

But the potential is real

So what’s the value proposition of HTML5 for mobile-game development? Cross-platform deployment, of course.

If you build your game correctly, you can deploy it across a variety of devices with a single code base. No other option for building games is as versatile. Not iOS nor Android. Not WP8 nor Unity.

HTML5 is a standard component of all popular mobile browsers, and it already has most of the necessary ingredients for great mobile games.

So what are the real issues?

Performance: Apple has made some big strides in terms of browser performance, but Android lags behind. High-quality animated games have problems on mobile platforms, and developers cannot target only the newest, fastest devices.

Distribution: This is the deal-breaker. The web has no compelling outlets for distributing HTML5. In fact, we’ve got just two compelling delivery options for any mobile game – the App Store and Google Play.

Monetization: Apple has a solid in-app payment solution, as does Google Play and even Amazon. The same cannot be said for the mobile web. Here we have a chicken-and-egg scenario. Monetization companies not called Apple or Google spend their energy developing solutions for helping game developers make money where the users are, namely in native iOS and Android games. These firms spend little energy creating compelling billing and currency solutions for the mobile web.

Messaging: One of the great innovations spurred by OS-native games is direct messaging via push notifications. Such a system does not exist for the mobile web.

Get to the point, Joe!

I promised I’d get there, so here it is: New technology providers have solved virtually all of the aforementioned criticisms lobbed against HTML5. Many people remain skeptical because of a lack of awareness, but the right tools are available. To be fair, it’s hard to keep up with. Tool maturity and availability is progressing at lightning speed.

Here’s how platform providers are solving the problems:

Performance problem: solved! Use hardware to directly accelerate the graphics commands, rather than use software APIs to draw images and animations on the screen like most mobile browsers.

Distribution problem: solved! Cloud Compiler enables developers to easily “wrap” their projects into a native hybrid container that is fully compatible with the Apple and Android Markets. While you’re at it, you might as well let Cloud Compiler build a WP8, BBY, Amazon, Mozilla, and Tizen app. One code base fits all.

Cool native device features problem: solved! Using the same concept used above for performance, tie the native device functions not available to HTML5 developers to JavaScript. Web developers then get easy “OneAPI” access to the camera, accelerometer, gyroscope, and so on.

Monetization problem: solved! In a similar fashion, create JavaScript extension APIs that bind native payments and native ad networks. Again, one API for in-app payment is abstracted to multiple payment systems behind the scenes by the platform.

Another upcoming solution (in Q1 2013) is to build a plug-in for mobile browser and handset makers that provides all of the functionality described above, creating “gaming” browsers and handsets that perform same-as-native.

So, why isn’t everyone embrace HTML5 for mobile gaming?

Be patient — they probably will.

Small, fast-moving companies are doing much of the problem-solving, and it takes time to deliver the message to the industry. The single biggest problem is awareness. And in the gaming industry, awareness comes with hit titles. And those are coming.

The first quarter of 2013 will probably be the quarter that turns the momentum for HTML5 mobile gaming; 2013 will definitely be the year that HTML5 game development takes center stage. Seriously – if you can develop a game with a single team and a single code base, check seven or eight boxes and get native binaries back for delivery to the most popular app stores, who wouldn’t consider it?