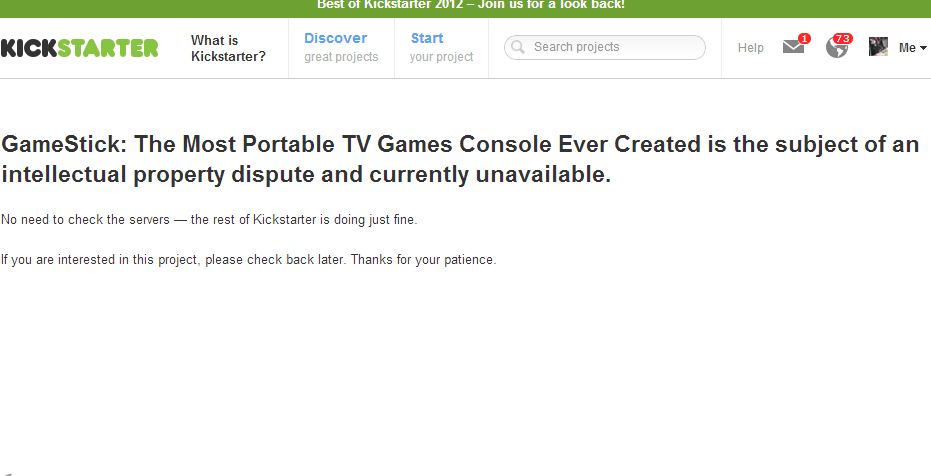 Our Kickstarter is BACK! Check this out! Love, GameStick: ow.ly/gHY3I

Update (1/10/13 @ 10:50 a.m.): PlayJam, the developer that created GameStick, claims the infringement has only to do with a game in its pitch video that it did not have the rights to.

Hi! Our IP issue has NOTHING to do with our product/design. It was an oversight in our KS video. We’re editing it to get back up and running

The company is posting further updates on its Facebook page.

Moments ago, Kickstarter removed the GameStick project from its website due to a dispute over intellectual property.

The tiny Android-powered GameStick console’s Kickstarter page is no longer accessible. The crowdfunding site replaced the page with a notice that the project is under dispute and released this statement to backers:

This is a message from Kickstarter Support. We’re writing to inform you that a project you backed, GameStick: The Most Portable TV Games Console Ever Created, is the subject of an intellectual property dispute.

The law requires that we remove the project from public view until the process is complete or the dispute is resolved. If we are not able to re-post it within 30 days, we will cancel the project, all pledge authorizations will expire, and the project will be permanently unavailable.

If you’d like to manage your pledge, you can do so through the project page:

If you have any questions, we encourage you to message the creator directly. You can also do this from the project page.

Thanks so much for your patience and cooperation,
Kickstarter

GameStick is a thumb drive-sized console that runs the Android operating system. It plugs into a TV’s HDMI input and is so small that it fits into the nook on its own controller.

Backers had already pledged more than three times the GameStick’s goal. The project had more than $300,000 in pledges with around three weeks left to raise more.

This device is similar to Ouya, which is a small Android console that raised over $8 million on Kickstarter. Both units are part of a current wave of “microconsoles,” which are systems that plug into a TV but aren’t necessarily as powerful or as expensive as the traditional products from Nintendo, Sony, and Microsoft.

While Kickstarter removed the GameStick project, that doesn’t mean PlayJam is guilty of any infringement. From Kickstarter’s copyright information page:

So the clock is ticking. PlayJam has 30 days to resolve the dispute or else Kickstarter will cancel the project.