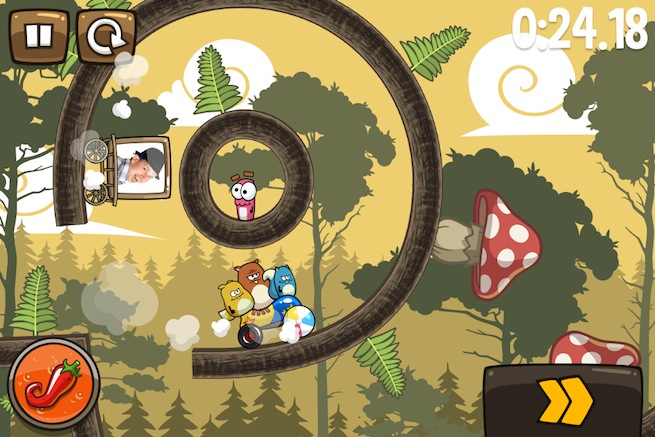 With furry critters and a three-star rating system, Noble Nutlings (available now for free in the iOS App Store) shares some similarities with other mobile games. But it has one thing behind it the others might not have: a prestigious pedigree.

It’s the first game from Boomlagoon, an independent studio founded by ex-Angry Birds developers in April 2012. Antti Stén, Tuomas Erikoinen, and Ilkka Halila are all former employees of the Finland-based Rovio Entertainment, where they were instrumental in the success of its blockbuster birds-versus-pigs franchise.

Angry Birds is a tough act to follow — no other mobile game has been able to reach the same sort of mass market appeal and lucrative merchandising deals it has so far. But Boomlagoon has crafted a solid game with Noble Nutlings even if the squirrel-like creatures are not as memorable as their avian predecessors. 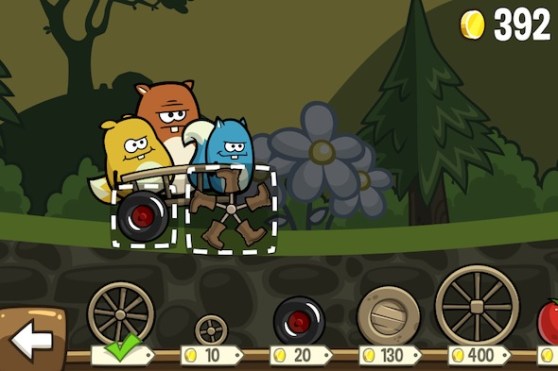 Drag-and-drop customization
Instead of flying through the air, the “nutlings” prefer to drive their way through a level. You start with a small wooden cart, but eventually, you can customize it with new parts in the form of apples, bananas, shoes, beach balls, stop signs, and other objects that don’t really belong on the road. Each of these items slightly affects the performance of your vehicle: wheels have different rates of acceleration, and swapping out different bodies will add more to (or subtract from) the weight of the cart.

You can purchase these parts using the gold coins you earn (usually by smashing into something). Alternatively, you can buy stacks of them with real-world dollars. But chances are you won’t ever need to since you can easily collect a couple hundred coins after playing for around 20 minutes. With the exception of two items that cost 50,000 coins each, everything else is attainable if you just put in enough time to get it.

All you have to do is drag and drop your purchases to equip them on the cart right before starting a new level. It’s a simple but elegant interface that doesn’t get in the way of your true goal.

Going for the gold
You have to make it from one end of a stage to another in the fastest time possible to receive the coveted three-star rating. Steep hills, winding tree trunks, rotating platforms, and other obstacles will slow you down along the way, so it’s important to find the right combination of bodies and wheels to overcome them. A boost mechanism powered by chili peppers can help you, but it’s a finite resource that you have to replenish using gold coins.

The key to winning is balance. By using either the virtual buttons or your iOS device’s tilt functionality (my preferred method), you have to make sure your cart doesn’t suddenly flip over and crash. All it takes is one bad landing for the nutlings to spill out of the vehicle and lose precious seconds as you wait for it to respawn.

Noble Nutlings feels exhilarating when you soar through the air at impossible speeds and (after some practice) deftly navigate its unpredictable terrain. I actually wanted to go back and replay levels for a higher score because I knew that I could do better — that I could shave just a few more seconds off the clock if I swapped one type of wheel out for another. Though I had no one else to compare my scores to — a handy column reminds you of how well your friends did in each level — chasing and surpassing my previous times was enough to keep me addicted.

You might want to mute it
Prepare to listen to the same two songs over and over especially if you end up replaying the levels for more coins and a better star rating. The first song, which you can hear in the trailer above, quickly turns from catchy to annoying after only a handful of times. The other track, which is featured in levels that take place in a forest, is thankfully a little more soothing to the ears.

Bland characters
You wouldn’t know it from playing Noble Nutlings, but the creatures actually have their own names and personalities (shown in the gallery below). We have the cranky-looking Abe (the brown one), the “loony” Lemmy (yellow), and their leader, Sydney (blue). Aside from their facial expressions and skin color, however, you wouldn’t be able to tell them apart.

With Angry Birds, the animals at least had unique abilities and animations to show how different they are from one another. But since all the nutlings ride in the same vehicle, their personalities and differences doesn’t affect the gameplay in any meaningful way.

Noble Nutlings is a good but safe debut from the three-man team at Boomlagoon. Aside from its cute premise and racing-inspired gameplay, everything else feels like something we’ve seen dozens of times before on the App Store. Hopefully, the team will flex their creative muscles a little more in future titles.

Noble Nutlings is available now for free on iOS devices. The publisher provided GamesBeat with a download code for the purpose of this review. I played and tested it on an iPhone 4S.