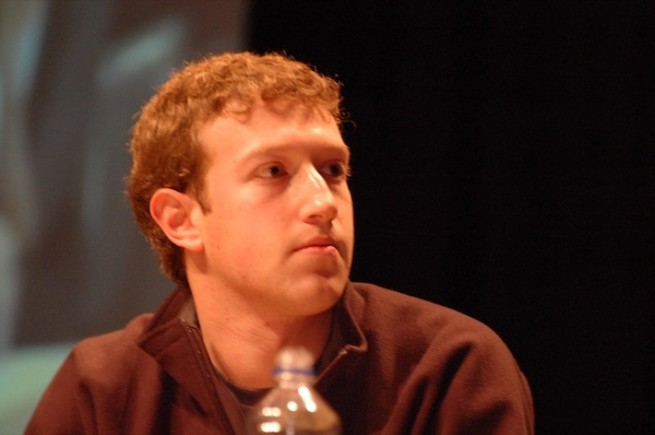 Want to send Mark Zuckerberg a message via the social network he created? That could cost you $100 … with no guarantee Zuckerberg will ever see it, as Mashable noticed this morning: 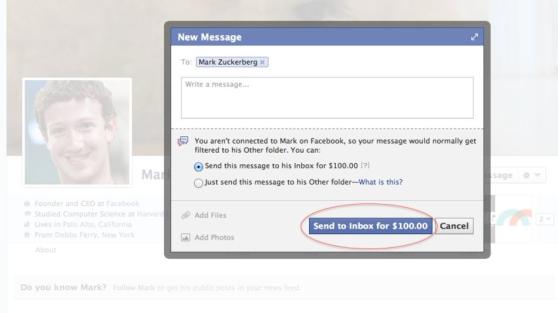 Above: $100 to message Zuck in Mashable’s screenshot

Facebook has been testing a pay-to-message system since late last year. Prices start at just $1 per message for the privilege of being deposited in recipients’ in-boxes — not the dreaded “other” box which many on Facebook rarely check, or even notice.

One goal of the test is less spam by creating some degree of friction between senders and receivers. Apparently the friction increases with the relative importance of the recipient. Mark Zuckerberg, of course, besides being the founder of Facebook, also has 16 million followers: a pretty strong social signal that he’s significant.

Which is actually a way to avoid the charge, interestingly enough. When you follow Zuckerberg, sending a message is completely free:

Pay for messaging is not yet standard on the site, nor is the test universal. So it’s entirely possible that Facebook will abandon this effort, and that it is currently applying the test to only a small number of random messaging attempts. I didn’t see the pay-for-message option whether I followed or did not follow Zuckerberg, but Mashable did see the pay option, at least for accounts that were not following the Facebook founder.

Frankly, it’s a smart way to monetize a feature that can be useful in small doses, but incredibly annoying en masse, and I hope Facebook makes the trial standard practice.

“The test is designed to address situations where neither social nor algorithmic signals are sufficient,” Facebook had announced in a blog post when the feature was rolled out. “For example, if you want to send a message to someone you heard speak at an event but are not friends with, or if you want to message someone about a job opportunity, you can use this feature to reach their inbox.”

But I’m not sure this is the best way to reach celebrities.

It turns out that reaching Zuckerberg’s inbox is a rather expensive proposition. And if you’re looking for a job at Facebook, chances are he won’t even see it.