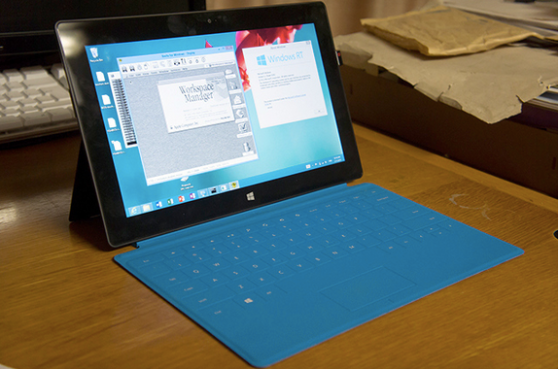 Windows RT and Mac OS are getting a lot closer, thanks to a particularly enterprising feat of jailbreaking.

Programmer Steve Troughton-Smith found a way to get an early version of Mac OS running on Microsoft’s Surface tablet, reports the The Verge. The hack, which builds on a jailbreak tool released by hacker Netham45 earlier this week, allows the Apple operating system to run inside Windows RT.

While there don’t seem to be many immediately useful applications for the Mac OS hack, the entire project is an interesting proof of concept for what can be done with both Windows RT and the Surface. Vibrant hacking communities often develop around easily hackable devices, even if the devices themselves don’t sell particularly well. Just take a look at the HTC HD2, which hackers love because they can’t install just about anything on it.

One thing, however, stands in the way of  the Surface matching the status of the HD2: Secure Boot, which prevents Windows RT devices from sideloading custom operating systems (and limits the Surface homebrew scene to the relatively limited hacks like the one you’re reading about now).

Microsoft itself hasn’t been too concerned with the hack, and in fact seems to be somewhat fond of it. “We applaud the ingenuity of the folks who worked this out and the hard work they did to document it,” Microsoft said on Tuesday, slightly alleviating concerns that it will patch the exploit — at least for now.