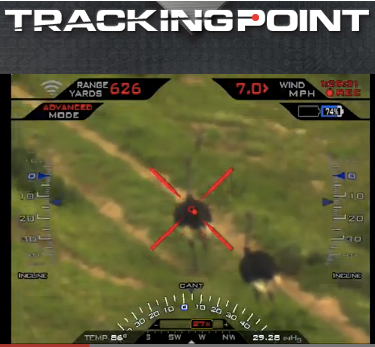 Earlier today, VentureBeat published an article about a new sniper rifle and scope technology that appeared at the Consumer Electronics Show in Las Vegas last week. Made by a company called TrackingPoint, the technology gives you a “lock and launch” experience that is similar to that used by fighter pilots who target enemy fighters and then launch guided missiles at them.

We wrote it up, including all of its freakishly cool details, including the fact that it is Wi-Fi networked so you can share your exploits in real time with a buddy’s computer — or with Facebook. We reported that its precision-guided accuracy helps you take those long-distance shots that can be otherwise be thrown off by wind, recoil and miscalculation. We also republished the company’s stated target customer for the gun: the hunter. However, it appears that while the company is planning one rifle for hunters, two other “tactical” models are also in the works, including a powerful .338 caliber model meant for long-range sniper duty. These are paramilitary weapons.

And of course, lower down, we threw in a line or two about how it is likely to be controversial in the wake of the tragic shootings at Newtown, Conn.

Now, we covered that technology because VentureBeat considers itself a forum for discussing technology of all kinds and how it impacts our lives, and also because, as the author Dean Takahashi told me, it made us feel creepy. It’s arguably worth publishing this sort of thing because, while some gun owners may actually go out and buy it, some people may try to put a stop to it. It’s not our job to censor, but to raise awareness about all technologies, even ones we find questionable.

On the other hand, we don’t hesitate from speaking our mind about a technology, and in this case, I find it truly repulsive. The first thing I thought of when I read this was that someone a mile away from me might be able to point this thing at me, pick me off, and do it without leaving the slightest trace. This deranged person would, in his fantastical whim, could do it to me and countless others. It conjured up images of the D.C. snipers, two guys who did just this sort of thing back in 2002, terrorizing the three states of Virgina, Maryland and the District of Columba for three weeks, killing ten and critically wounding three others.

It’s disgusting, too, because of the bizarre resemblance to gaming technologies, all the while being explicitly not for gaming, but for live kill. As Dean noted in his piece, the weapon seems like something out of the futuristic game Call of Duty: Black Ops II. Or, for that matter, any other game where you lock on an animal or person, and pull the trigger to see the target explode into pixelated smoke. Check out the video on Dean’s piece, or the one the manufacturer’s site (see below). The latter video shows hunter zeroing on on what look like buffalo and antelope, and you see them get shot, and make pathetic spasms across the screen. Ironically, this is is coming from the gun industry, at a time when the NRA is putting the blame for mass murders on video gaming and the media.

Notably, while the Obama Administration is considering new ways to limit gun violence through legislation, and may make some proposals as early as Tuesday, there’s little chance the new proposals will come close to banning something like this sniper rifle. This is legal, and will be for the foreseeable future. Obama’s proposals are likely to focus merely on boosting background checks on gun sales, limiting the number of bullets in magazines, and perhaps banning military-style assault weapons.

So here’s the thing. While innovators are advancing our ability to kill with ever more precision, the question is: Where are the good-guy innovators who are helping stop or block this sort of technology — through legislation or otherwise? And how do they do it? Well, right now these folks are called activists, and they’re fighting hard to push through gun safety legislation on Capitol Hill. But they won’t come close to being able to combat this sniper scope for a very long, long time to come. And that’s why this “game” feels very one-sided right now, not to mention frustraingly unfair.