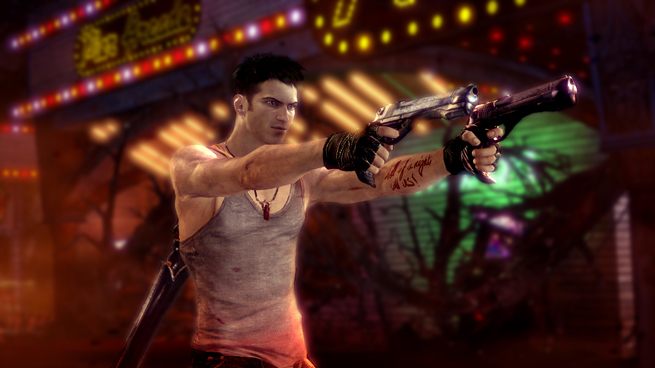 Don’t ask me why the revised Devil May Cry comes with its own acronym attached to the title. More than anything, it looks like the new kid who’s trying to sneak a piggyback from the old soldier, and certainly that’s the impression DmC: Devil May Cry (available Jan. 15 for Xbox 360 and PlayStation 3 and Jan. 25 for PC) reinforced as I played through it.

Not that it’s a bad thing. Publisher Capcom brought in U.K.-based Ninja Theory (Heavenly Sword, Enslaved: Odyssey to the West) to reimagine its classic demon-smacking franchise, and that turned out to be a wise move indeed. The result isn’t so much a reboot as a do-over made by a very talented group of devoted fans. As such, DmC invites you to dish out a colossal helping of whoopass at supersonic speeds for nearly 12 hours straight, and I like that in a game. But you can’t say the 2001 original didn’t have a few kinks to work out, and unfortunately, Ninja Theory lovingly re-created those, too. 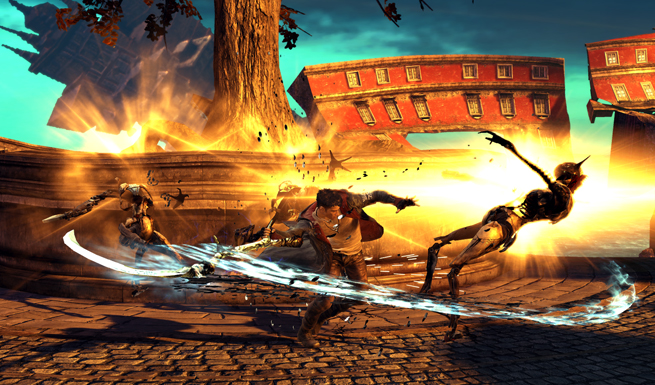 When the developers first unveiled their redesigned Dante, the Internet exploded with hatred. Dial it back, folks. Sure, he’s got a shorter, darker haircut, but nouveau-Dante swaggers with a nicely familiar, too-cool-for-you attitude that puts the “bad” in “badass.” Seriously, he even gets dressed with more screw-you style than every rock-band singer living or dead combined, and a fun visual gag early on nails home just how cosmetic the changes really are.

In fact, you can almost apply that thinking to the entire game. Ninja Theory made the smart decision to untether from the franchise’s twisty continuity for its remake, but the game fans remember is intact. Dante, the son of the demon Sparda, gets involved with his twin brother Vergil and a supernatural assistant — the witchy Kat, who replaces the demonic Trish — to whack archdemon Mundus for killing his parents. You collect red orbs, discover secret missions, activate Devil Trigger overdrive modes, and find your performance graded on total items collected and attacks chained. Your sword’s name is Rebellion. Your rapid-fire, no-reload shooters are Ebony and Ivory. You’ll kill scores of infernal bastards in brutally awesome ways almost nonstop for 12 hours or more, depending on your thoroughness. Just like old times.

And it’s still as good as I remember. DmC feels like what the original Devil May Cry would have been if Capcom made it in 2012 rather than 2001. It resets the stage but remains loyal to veterans while opening the door wide for newcomers. That’s a tough juggle. Ninja Theory pulls it off … with style. 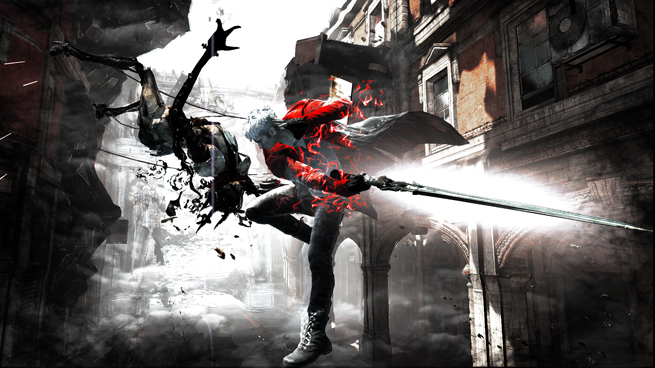 The new spins on the old beast mainly happen in the combat, and they’re all geared toward dishing out constant pain in interesting ways.

Dante and Vergil aren’t just half-demons anymore — they’re Nephilim, demon/angel crossbreeds. That gives Dante access to a range of heaven and hell-based weaponry that unlock at a steady clip and, just like past Devil May Crys, the game highly encourages you to combine them and get experimental with your attacks. Switching weapons midcombo is as easy as pulling a trigger on your controller. I routinely swept an enemy into the air with Rebellion, shot him a whole lot, and then turned him into my personal pinata using a swirling angelic scythe before applying the beating of a lifetime with Satan’s own boxing gloves — all in the blink of an eye. A robust combo system rewards aggressive yet eclectic tactics while punishing button-mashers, particularly when you run up against baddies that only respond to specific weapon types.

Oh yeah, you get to tear it up in DmC, and it feels good.

But it’s the mix of heavies, soldiers, and armored soldiers — along with the various tools for dispatching them — that really elevates what’s basically a long series of locked-room arena fights. Ninja Theory threw in dozens of enemy types, and each combination made for a new problem I had to destroy in slightly different ways. That keeps the pace brisk (save for one late-game puzzle … the only one in the entire game) and the action engaging right through to the end.

It’s not all beatings and hell-axes, though. Frequent platforming and aerial maneuvers also key into the heaven/hell arsenal, either by yanking items and enemies closer or whipping Dante to them, often with the same thrilling rush of decimating armies of monsters. As an example, one major highlight sees Dante chasing and protecting Vergil and Kat’s getaway car as Mundus destroys the world around them. Escort missions generally don’t get my adrenaline pumping. This one did. 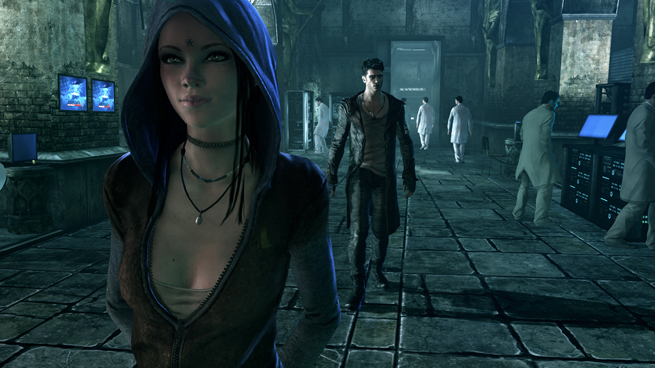 Plot? C’mon. It’s a Capcom game. Demons bad; shoot/slice them, bro. But inside that framework, the team at Ninja Theory got to play, and they didn’t feel compelled to play nice.

So Mundus cheerfully brags about ruling the planet through debt while his primary tools of conquest are junk food (laced with a fairly vile secret ingredient not called high-fructose corn syrup) and hysteria-fueled news media. Most of the action happens in Limbo, a surreal parallel dimension where Dante can see the demonic influence on our world, so in addition to some genuinely inspired visuals, we also get subliminal messaging from hell’s marketing department, They Live-style. Global warming … it’s as good as it sounds! Feel thin and sexy because you drink soda! Hate the poor because it’s their own damn fault for being poor! DmC riffs hard and heavy on themes of everyday excesses, shoving pure spite down your throat at every available opportunity with a mad twinkle in its eye. I can appreciate that.

Generally speaking, the writing sustains the thin storyline surprisingly well. It’s not as rich as what Ninja Theory did with Enslaved: Odyssey to the West, nor do the characters come off as deep or (I’m suppressing a chuckle here) nuanced. But if you wanted subtlety, you came to the wrong franchise, bucko. Approach DmC as a popcorn flick with a particularly sick sense of humor, and you’ll enjoy the ride.